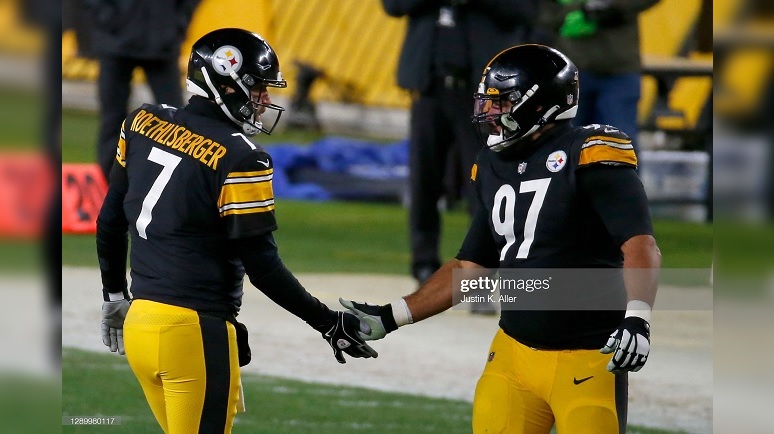 Teammates for the last 11 seasons and fellow team captains for the last seven seasons, the time together for Pittsburgh Steelers’ quarterback Ben Roethlisberger and defensive lineman Cameron Heyward is winding down with just two games left, putting Heyward in more of a reflective mood on Friday during his media availability ahead of the Monday Night Football matchup with the Cleveland Browns at Heinz Field.

Speaking with reporters at the South Side facility, Heyward expressed his appreciation for being Roethlisberger’s teammate all these years, while also reflecting on some of his favorite memories of Roethlisberger the quarterback and competitor.

“Well, it’s for sure not his last game,” Heyward said to reporters Friday, according to audio provided by the team. “So, you know, I remember when I used to watch Ben — shoot, I remember that Super Bowl game against Arizona, them playing Arizona and he’s made some moments, and…I’ve been appreciative to just be his teammate.

“Two games left, that’s all we’re guaranteed,” Heyward added. “Hopefully we can make this tour last a little bit longer, but I think as a teammate, you appreciate what he’s done. Just wanna send him off with everything I can.”

As a teammate and friend of Roethlisberger’s for more than a decade, Heyward has had one of the best seats in the house year after year when it comes to observing and learning from a Hall of Famer like Big Ben. That alone has Heyward feeling like one of the luckier ones for his time around Roethlisberger and all that he’s meant to the Steelers’ organization.

“Man, I was one of the luckier ones,” Heyward said. “Not many guys say they play with a Hall of Fame quarterback. Just the moments we’ve had, the plays he’s made, the leadership he’s shown, the growth he’s had throughout his career…man, I’m just appreciative of it. Ben has always been a fighter, always giving us a chance. And he’s battled a lot and you know, he’s been rewarded with two Super Bowls. But we’ve needed every bit of Ben Roethlisberger in every game he has played. You can’t just replicate that.”

The dawn of a new era is on the horizon for the Steelers, which has many veterans on the team in a reflective mood, none more important than Heyward.

If this is the end of the Roethlisberger era in Pittsburgh, many front office personnel, coaches past and present, current and former teammates and the entire fanbase will match Heyward’s mentality when it comes to Roethlisberger: Appreciative to just be part of the era.