The Minnesota Vikings will host the Pittsburgh Steelers on Thursday night to get Week 14 of the NFL season underway, and ahead of that contest, they released their first official injury report for that game on Monday.

The Vikings only held a walk-thru on Monday, so just like the Steelers, their first injury report of Week 14 is only an estimated one when it comes to levels of practice participation for players. Ten players in total are listed on the Vikings’ first injury report.

Had the Vikings held a team practice on Monday, running back Dalvin Cook (shoulder), tackle Christian Darrisaw (ankle), linebacker Blake Lynch, and wide receiver Adam Thielen (ankle) would have all likely sat out the season. All four of those players start the week very questionable to play on Thursday night.

Listed as probably being limited on Monday for the Vikings had they conducted a practice are linebacker Anthony Barr (knee/hamstring), safety Camryn Bynum (ankle), linebacker Ryan Connelly (quadriceps), and linebacker Eric Kendricks (biceps).
The Vikings also listed cornerback Mackensie Alexander (ribs) and cornerback Bashaud Breeland (groin) as likely full practice participants had the team had a session on Monday. 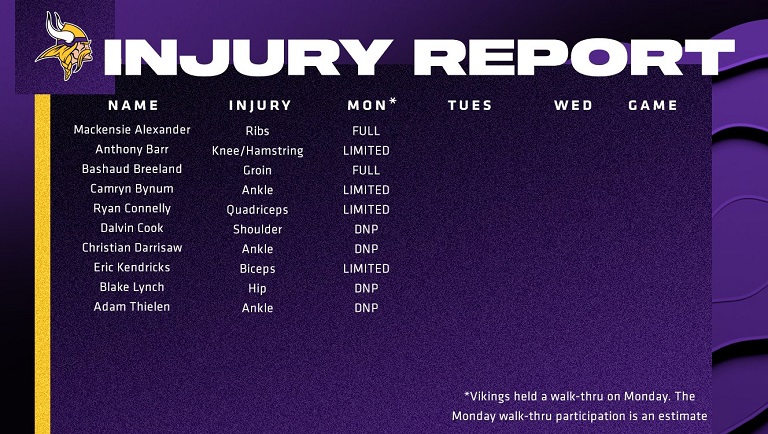