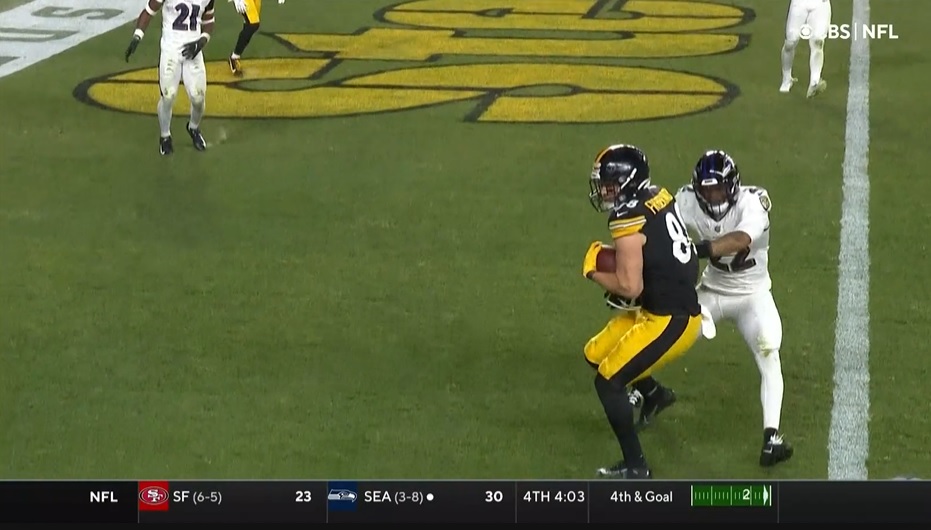 1. Rush To Judgement – Dan Patrick had it right. “You can’t stop him; you can only hope to contain him.” Hats off to the Steelers pass rush and the coaching staff to design a game plan to put pressure on Lamar Jackson. He was able to escape and get some yards here and there but the pass rush kept coming. Six sacks and ten quarterback hits it’s a damn impressive showing. A revenge game for Chris Wormley who got as many sacks in this game as he did in three years in Baltimore. And T.J. Watt don’t need no practice.

2. He’s An Octopus – Google octopus escaping and you’ll understand what I’m talking about. Octopi have the ability to escape through small holes in the side of boat, out of tanks at the aquarium and from enclosed jars. Jackson is a glitch in the matrix. A cheat code. His ability to change directions and slip through tight areas and then accelerate in a heartbeat like an octopus avoiding a predator is really impressive. I just wish he didn’t play in the AFC North.

3. The Need For Speed – I am definitely not the first to say this but this team is severely lacking in speed in every phase of the game. They don’t have a player to take the top off of the defense consistently or a speed threat in the backfield (although only one guy touches the ball in the backfield anyway). The defense was in chase mode for most of the first half and was woefully overmatched. They made Devonta Freemen look fast. The return game needs some juice as well. Put speed on the list of draft needs.

4. Hello, Joe? – It’s interesting how a team can be so high on someone and then three months later they can fire him. Joe Brady, the architect of the LSU national championship and former offensive coordinator was let go on Sunday by the Carolina Panthers. Call him. Bring him in for the rest of the season. Pick his brain. I’m sure he get interest elsewhere by its worth a shot to have another young offensive mind in the fold.

5. Silver Spoon – It came from and unlikely source but it was good to see. Someone from defensive backfield finally showed some physicality. Ahkello Witherspoon had five tackles in the game and two or three of them actually had some pop behind them. Mike Tomlin said there would be some small changes and Witherspoon was one of them and seemed to play fairly well including the late fourth quarter pass break up.

6. Young Guns – Thirty-one passing attempts and twenty-five rushing attempts. Of those fifty-six plays, forty-one of them were touches and/or targets to Najee Harris, Diontae Johnson and Pat Freiermuth. Seventy-three percent of the offense went through those players including touchdowns, the two point conversion and eight completions on nine on targets to the rookies. The rest of the wide receivers had three receptions on eight targets. This team would be in big trouble if Johnson gets hurt.

7. Physical Is Okay, Mental Is Not – So let me get this straight. T.J. Watt stands over a smaller player and says something to him and he gets a flag. Ravens safety Chuck Clark can drill a player not going for an uncatchable ball and there is no flag? The league talks about their “concern” for safety in the game but doesn’t call an egregious hit. Just like the Chargers linebacker not getting fined for elbowing Harris in the head. The more the NFL does, the more they screw things up.

8. Oh No, Romo – Tony Romo remarked late in the game how he like the Steeler run play to just have the lineman block and let Harris do all the work. He knows way more about this game than I do but I’m tired of seeing a back run into a pile more often than not. Yes it worked late in the game but that is not the norm. The Ravens running game has infinitely more creativity than the Steelers have. Maybe the novice offensive line has something to do that but we won’t know unless they try.

9. Every Team Needs A Leglue Guy – Due to injury the Steelers had to use their fifth different player at left guard this season. I admit my focus was not on him the entire game but he had some good blocks. The got out on the screen to Harris to get a good block and in the fourth quarter he had a couple of effective blocks where he was able to sustain, move defender and flip his hips around to stay between the blocker and the ball. This is an issue Kendrick Green has had so maybe it’ll rub off on him.

10. PI Is PU – The defensive pass interference call on Minkah Fitzpatrick is one that happens often. The underthrown ball where the defender has almost no chance to not make contact with the receiver. This rule needs to be reviewed to somehow determine if a receiver would have a chance to catch it. Use a certain distance behind the receiver that would give him a legitimate chance to make an attempt. You’re punishing a guy running at top speed for something the quarterback did.