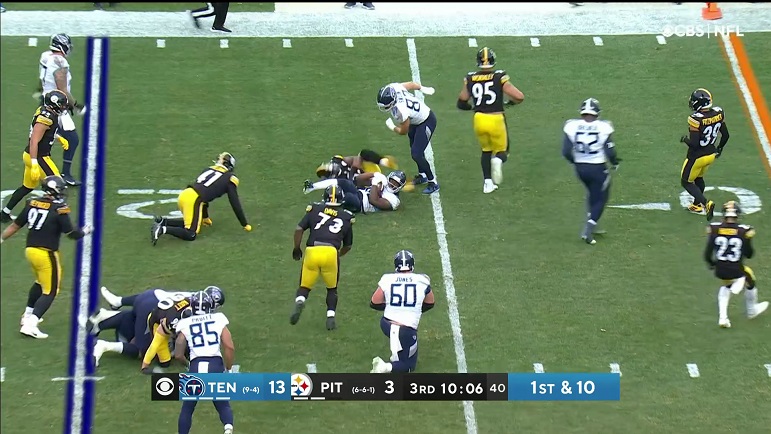 The Pittsburgh Steelers were able to get three defensive players back in uniform this past Sunday in the team’s home win against the Tennessee Titans in the form of cornerback Joe Haden, defensive tackle Carlos Davis and inside linebacker Robert Spillane. Spillane, for example, logged 34 of a possible 80 total defensive snaps in that game against the Titans with roughly a third of those coming during Tennessee’s final offensive possession of the contest. On Tuesday, Steelers head coach Mike Tomlin was asked specifically about Spillane’s play against the Titans and if he thinks his role will continue to expand down the stretch.

“I was appreciative of his efforts,” Tomlin said of Spillane’s play on Sunday against the Titans. “It was good to get him back in uniform. We worked him in in the ways that we worked some of the other guys in that were working their way back. Carlos Davis, Joe Haden, we had them all on a pitch count. It’s reasonable to expect that to continue and increase where earned and Rob did a good job, and we’ll see where this week leads us.”

While Haden only played 27 total defensive snaps on Sunday against the Titans, he made a game-winning, fourth down tackle at the end of the contest. As for Spillane, who was part of a Sunday inside linebacker rotation that included Devin Bush and Joe Schobert, he registered three total defensive tackles in that contest to go along with one assisted tackle in special teams.

Interesting enough, Spillane played 22 of his Sunday snaps in the second half with a good chunk of those coming as part of the defenses’ nickel personnel grouping. As previously mentioned in this post, Spillane was on the field for the Titans’ final offensive possession of the Sunday home game while Bush stood on the sideline as a spectator.

While the Steelers did ultimately win their Week 15 game against the Titans, their defense still surrendered another 201 total net yards rushing in the process. This coming Sunday the Steelers defense will play a Chiefs’ offense that has averaging 109.9 yards rushing per game this season at a rate of 4.47 yards per carry. The Chiefs also have a potent passing game led by quarterback Patrick Mahomes, who can also scamper with the football quite effectively.

With Spillane now seemingly back from the knee injury that resulted in him missing two games prior to Sunday’s contest, it will be interesting to see if he is allowed to play a higher percentage of snaps on the road on Sunday against the Chiefs. If he does wind up seeing more playing time against the Chiefs, it would likely come mainly at the expense of Bush.