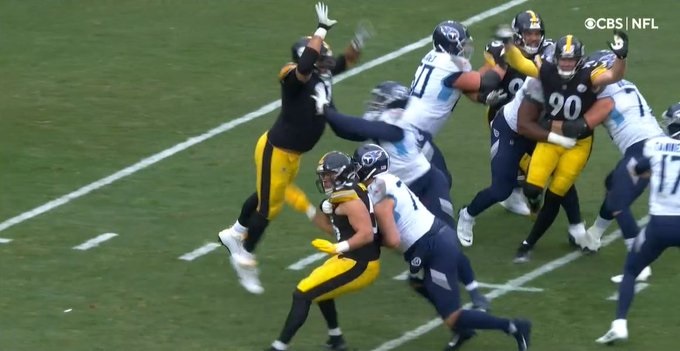 Just like everyone watching at Heinz Field and at home, TJ Watt is baffled the Tennessee Titans weren’t called for holding Sunday afternoon. And I mean Titans plural. Two of them grabbed Watt around the waist late in the first half Sunday. Watt, the frontrunner for Defensive Player of the Year, still got half the sack.

If you need a refresher or just need a reason to get mad again, take a look at the play.

“No,” Watt said when asked about the non-holding call. “I told the ref I was on a treadmill. I was running in place.”

Offensive linemen can get away with a lot in those moments and refs are only human. They can’t see everything. But that one seemed obvious especially with two officials staring in the backfield.

TJ Watt getting held by two players. Both refs staring right at the line.

"Looks clean to me!"

As Watt spoke, he sounded frustrated about the inconsistent officiating though was careful not to criticize the refs directly.

That one clearly deserved a flag. Or ten. But the play still ended positively for the Steelers’ defense. Watt broke through the bear hug, teaming up with Cam Heyward to sack Tannehill on third down, forcing a field goal. Watt finished the game with 1.5 sacks, setting a new official franchise record for sacks in a season. He has 17.5 with three games to go with a chance of matching or breaking Michael Strahan’s 22.5 sack record.

A premier pass rusher, Watt said he’s still dealing with figuring out how to defeat all the extra attention the NFL sack leader receives.

“It’s one of those things through film study too, just knowing if they’re a chip team with a running back, if they like to use an extra o-lineman to come in to help out, or if they like to use a tight end to chip. If the tight end is in the core, if the tight end is out of the core, if they wanna slide and use a guard and a tackle. Trying to work games is the biggest thing I could say. Trying to use your inside pass rusher as well…work together so it’s not one guy getting doubled.”

Watt is still setting record numbers despite double-teams, chips, holds, and even playing through multiple injuries. He’s been worth every penny the team gave him this summer. And if the Steelers are going to make a playoff run, they’ll need Watt to keep playing his best football.

Check out the full interview below. It’s well-worth your time.