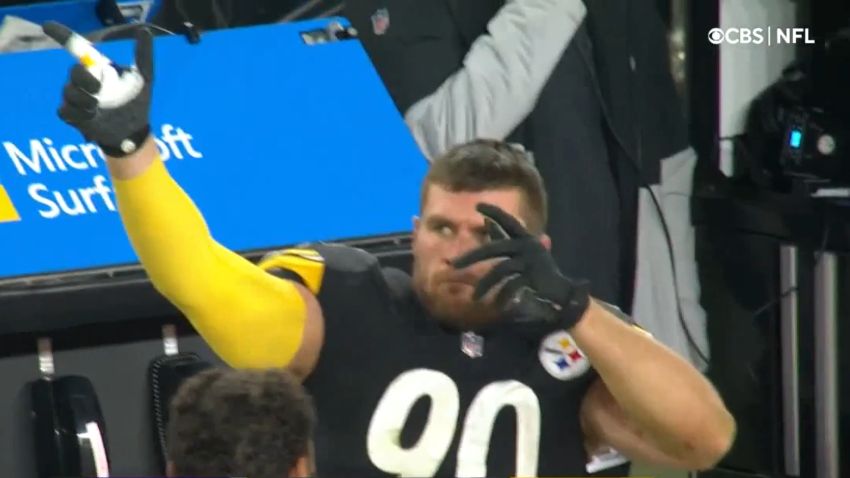 There are plenty of conventional and unremarkable things that one might have in common with somebody who was excellent in their craft—even if was just the two of you who happened to have that one thing in common. The company Pittsburgh Steelers outside linebacker T.J. Watt now keeps, however, is well-earned.

With his first of four sacks on the evening, he became just the second player in NFL history to post four consecutive seasons during which he recorded at least 13 sacks. The feat had been accomplished twice before—both by the late, great Reggie White, who did it twice in a span of nine seasons. Nobody else, ever in the history of the NFL, has done that.

Granted, that’s a pretty specific number. He is the sixth player, for example, to record at least 12 sacks in four consecutive seasons (since sacks became an official statistic in 1982), though just the second of this millennium. The last player to hit even that lower threshold was Simeon Rice between 2002-2005.

But even double-digit sack seasons are not to be taken for granted. Even if you reduce the threshold all the way down to 10 sacks, only 28 players have done that in four consecutive seasons since 1982. Myles Garrett has done it, and Aaron Donald marked it last year, as the most recent players. J.J. Watt is another one of the more recent examples, from 2012-2015.

Yet not even he hit 13 sacks, or even 11 sacks, in four consecutive seasons. He did have 69 sacks in a four-year span, with T.J. currently at 58.5 however, but J.J. hit the 20-sack mark twice in that run. T.J. needs four more sacks over the final five games to record the first 20-sack season in franchise history.

As for Reggie White, only Bruce Smith has more sacks than him in NFL history, finishing his 15-year career with 198. He recorded 13 sacks as a rookie, and 16 in his second-to-last season before retiring, only to return to play one more season. He never finished with fewer than eight sacks in his first 14 seasons, and hit at least 11 in the other 12, hitting at least 18 three years in a row, notching 58 in just three years—70 in his first four seasons.

With Watt, you know that you’re looking at a future Hall of Famer, as long as he doesn’t suddenly fall off a cliff, and this is looking like the year that he might finally receive the Defensive Player of the Year Award that cements him as one of the very, very best, transcendent defensive players in football today.

Now with 16 sacks on the season and four forced fumbles, along with 16 tackles for loss, all in just 10 games played, he simply wrecks offensive game plans, as he did yesterday against the Baltimore Ravens. He can’t win games all on his own—but he sure makes a run at it. And he arguably has two game-winning plays just this season: First against the Seahawks, and then yesterday on the two-point try.