Today I wanted to look at some data for the season, discuss takeaways for the Pittsburgh Steelers Week 14 matchup against the Minnesota Vikings on Thursday night, and pose some questions for you the readers.

First let’s look at quarterback stats from Next Gen Stats: 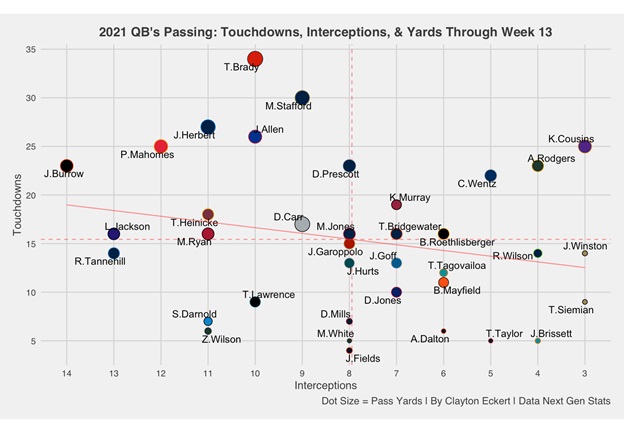 Looking at touchdowns, interceptions, and pass yards, we see Vikings quarterback Kirk Cousins on the top right of the graph. He is having a great season in this regard with 25 touchdowns and tied for the fewest interceptions (on a much larger sample size) with only three! This touchdown to interception ratio is even more impressive considering he is among the league leaders in attempts (5th), yards (6th), completions (5th), and passer rating (2nd)!

In comparison, Steelers quarterback Ben Roethlisberger lands on the middle right of the graph, slightly above the mean for touchdowns (16) and above the mean in interceptions (6). Roethlisberger ranks 12th in attempts, 18th in yards, 11th in completions, and 20th in passer rating. He is coming off his best performance of the season and comeback win against Baltimore, so it will be very interesting to see how he performs against the Vikings defense. 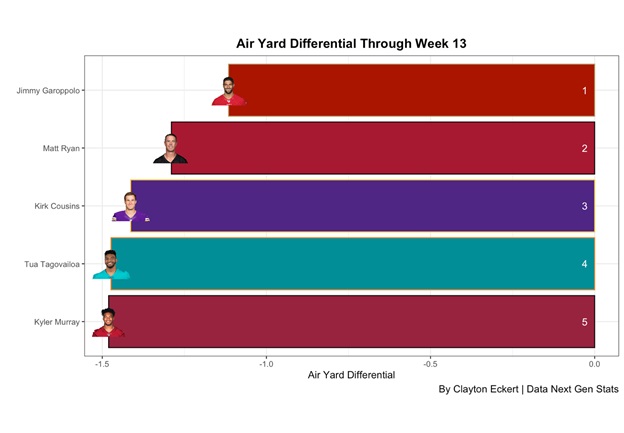 To put this into context, Cousins has an intended air yards number of 7.4 which ranks 28th in the league, along with a competed air yards number of 5.9 that ranks much higher at 13th. He may not chunk the ball down field at a top rate, but he is very efficient (5th ranked completion percentage at 68.4%), and the Steelers defense will need to be on point in coverage and hopefully better at tackling the catch in this matchup.

Roethlisberger ranks 20th in air yard differential through Week 13, with a slightly increased intended air yards number of 7 that ranks 32nd out of the 37 total quarterbacks. His completed air yards number is only 4.7 which ranks very low at 35th. We are seeing him push the ball down the field more as of late, ranking 11th intended air yards in Week 13 but very low 3.3 completed air yards. This highlights the need for the connection improve when he takes his downfield shots, an important factor for Pittsburgh in the matchup and through the tough remaining schedule to end the season.

How do you think the quarterbacks will perform?

Next let’s look at the wide receivers with the following data points: 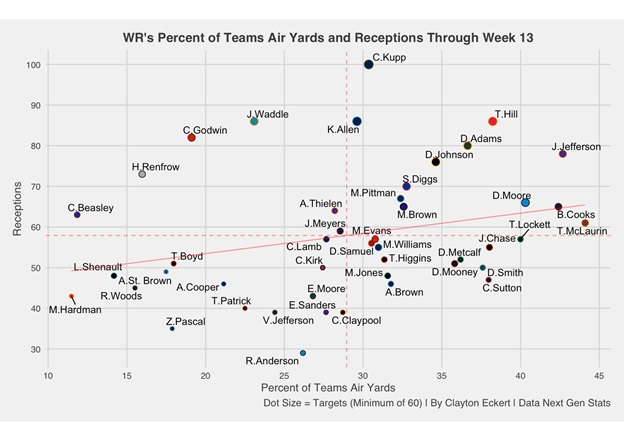 With this view we can see Vikings wide receiver Justin Jefferson, who is having a great year, on the top right with the second highest percent of teams air yards at 42.7%! He also has seven touchdowns (T-4), 78 receptions (7th), 112 targets (T-7th), and 1209 receiving yards which is second in the league!! This highlights the need for the Steelers defense to put their primary attention on Cousins’ favorite target, and it will be interesting to see how they fare with cornerback Joe Haden likely out another game.

Steelers wide receiver Diontae Johnson lands on the top right as well, close to Jefferson in receptions with 76 (8th), the fourth most targets (120), but lower with 914 yards (9th) and percent of teams air yards at 34.6 which ranks 13th along with six touchdowns. Hopefully he has another strong game as we saw in Week 13!

Vikings wide receiver Adam Thielen lands at the middle of the graph but is out for the matchup. This should allow Pittsburgh’s defense to key in on Jefferson more, but their success will be interesting considering his stellar game in Week 13 against the Lions when Thielen left the game early. Thielen has 64 receptions on 92 targets and 686 yards and an impressive 10 touchdowns! His production will not be easily replaced, so it will be interesting to see how fellow wide receiver K.J. Osborn fares and his involvement as the likely next man up.

Pittsburgh wide receiver Chase Claypool is at the bottom middle on the graph, near the mean in percent of teams air yards but tied for third worst in receptions (39) out of players with at least 60 targets. Claypool has 72 targets highlighting the continued connection issue with Roethlisberger on the second worst catch percentage (54.2), 660 yards, and one touchdown.

Which wide receiver(s) will have a big game in the matchup?

For tight ends let’s look at the following data points: 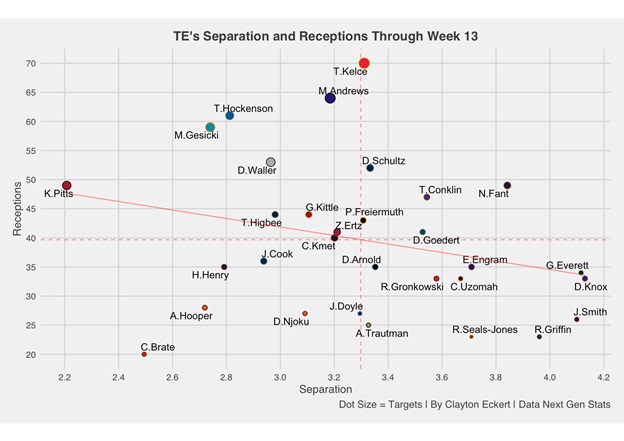 Here we see Vikings tight end Tyler Conklin on the top right of the graph highlighting his above average separation and ninth rank in receptions (47) at the position. He could also see and expanded role with Thielen out and could fare well against Pittsburgh’s linebackers.

Steelers tight end Pat Freiermuth lands in the middle of the graph, barely above the mean in separation and more importantly above the mean with 43 receptions (12th). It will be interesting to see which tight end has the stronger game, with Freiermuth hopefully providing third down conversions and a red zone score. 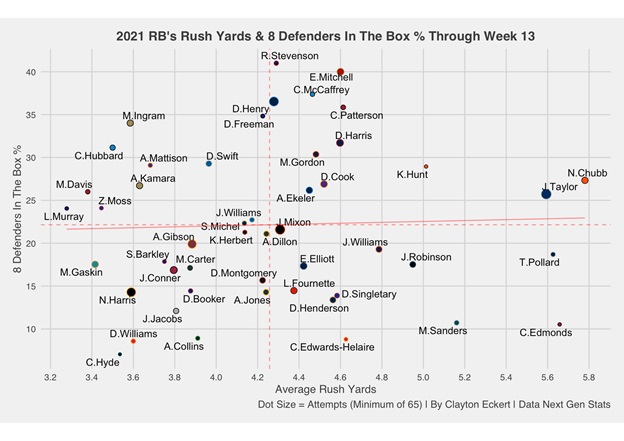 Really enjoyed this view to giving situational context to a generic average rush yards stat. Vikings running back Dalvin Cook lands on the top middle of the graph, 4.5 average rush yards which ranks 15th and seeing eight defenders in the box on 27% of his runs, also ranked 15th in the league on his 171 carries (7th). Cook missed Week 13 due to injury where fellow running back Alexander Mattison got an increased workload, and it will be very interesting to monitor Cook’s game status. Mattison has seen eight defenders in the box even more at 29%, the 12th highest rate on his 110 carries, but his average yards per rush much lower than Cook’s at 3.7.

Steelers running back Najee Harris now has 217 rush attempts which is 4th in the league, and despite seeing eight defenders in the box on only 14.3% of his carries has 3.6 average rush yards. This highlights what we have seen through the season, bright spots but inconsistency from the offensive line. Harris has been impressive in the receiving game and is now the league leader for running backs in targets (72) and second in receptions (57) along with 387 yards which ranks sixth! In comparison, Cook has 34 targets, 27 receptions, and 202 yards while Mattison has 27 targets and an impressive 24 catches for an 88.9 catch percentage and 183 yards.

Which running game will win the battle on Thursday night? 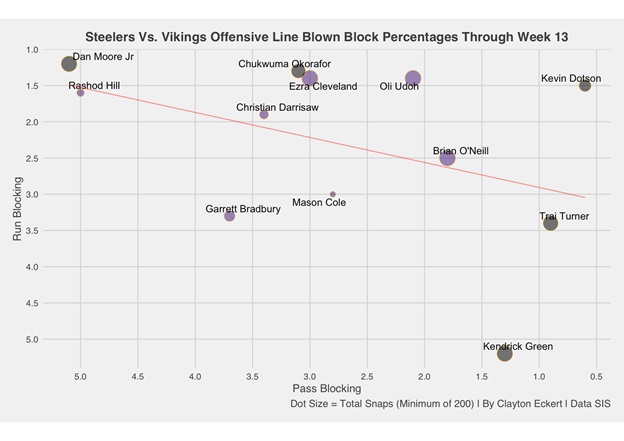 Interesting results, with injured Steelers guard Kevin Dotson topping the list with the lowest total blown block result of only 1%! With SIS only tracking players with more than 200 snaps, this highlights the roulette wheel the Steelers have had to roll out at left guard with J.C. Hassenauer (injured reserve), Joe Haeg (COVID), B.J. Finney (out), and lastly John Leglue who looks likely to start his second game this week after a strong overall showing against the Ravens. Fellow guard Trai Turner has the second-best overall result with a 1.8% total blown blocks with an impressive .9% as a pass blocker but 3.4% blown blocks in the run department. Tackle Chukwuma Okorafor ranks third for Pittsburgh and sixth overall with 2.4% total blown blocks, a second overall rank as a run blocker with only 1.3% blown blocks along with 3.1% of his pass blocks being blown. Pittsburgh center Kendrick Green ranks fourth on the team and eighth overall with 2.9% total blown blocks, 1.3% as a pass blocker and 5.2% as a run blocker, which is the lowest single result on the graph! Tackle Dan Moore has the lowest result overall in total blown blocks at 3.9% with the worst blown pass block result of 5.1%, but the best run blocking result overall with only 1.2% blocks blown!

Which team will win the battle of the trenches? 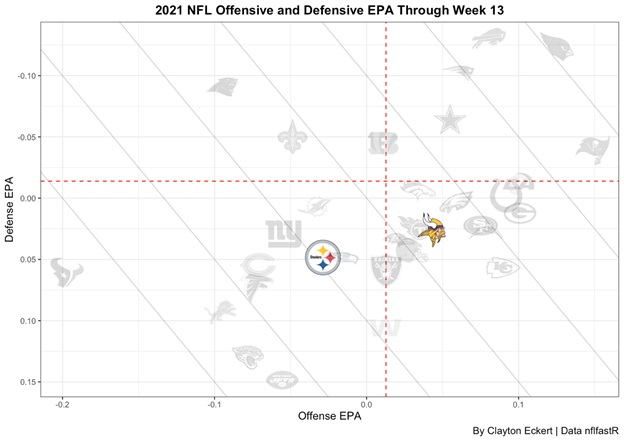 Minnesota has an above the mean result in offensive EPA, ranking 12th in the league along with a defensive EPA number that ranks 17th! The Vikings have been without defensive lineman Danielle Hunter since Week nine and Everson Griffen since Week 12, so it will be interesting to see how their pass rush performs against the Steelers offensive line considering they lead the team in sacks. Linebacker Eric Kendricks is their leading tackler with 109 combined, which is tied for sixth in the league! Kendricks is also tied for the team lead in interceptions with safety Xavier Woods, each having two and ten total for the team. Woods also has the team lead in passes defended with eight.

Pittsburgh is below the mean on both offense and defense, ranking 22nd on both offense and defense. Hopefully the Steelers offense can continue to build on the strong fourth quarter performance in this matchup against a below the mean Vikings defense, a very necessary element to capitalize on for victory in my opinion. Cook’s availability is a big factor, hopefully the Steelers run defense can capitalize with a strong performance off improvements from last week against the Ravens, especially in the explosive run department. It will be interesting to see how the Steelers defense fares in this matchup against the Cousins and Jefferson led offense. Hopefully Watt can have another big sack game to disrupt their passing game and add to his league lead at 16, and the Steelers hopefully winning the takeaway battle considering Minnesota has the edge in the stat on the season.

Who do you think will come out with the victory Thursday night? Thanks for reading and let me know your thoughts in the comments!