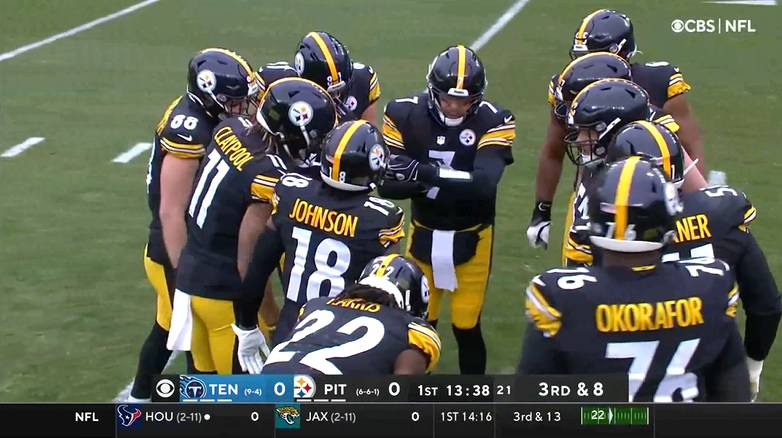 If the Pittsburgh Steelers were an MLB pitcher, they wouldn’t be aiming for a perfect game right now. At times, it feels like they’re just trying to find the strike zone. Somehow, they still find ways to win ugly. Allow a couple of doubles. A few wild pitches. Throw over the first baseman’s head. But all in victory, as was the case in the team’s 19-13 win over the Tennessee Titans Sunday afternoon.

Talking to reporters Monday, TE Zach Gentry knows the team still has a long ways to go to get where they want to be.

“We’re still searching for that perfect game,” he said in audio provided by the team. “There’s definitely still opportunities. Even the games we’ve won, there’s stuff that we leave on the field just individually and collectively. There’s certain plays where one guy kind of misses their opportunity or is a little late to their guy.”

Sunday’s win came in an offensive mess where little went right. Pittsburgh’s longest play from scrimmage, not including penalty, was just 19 yards, James Washington’s sideline catch that set up Chris Boswell’s failed 56-yard field goal attempt. The Steelers totaled just 168 yards of total offense, their fewest in a win in more than a decade. They had the ball for less than 20 minutes, converted just two third downs, and found the end zone just once, Ben Roethlisberger’s rare QB sneak into the end zone.

In fact, it was Gentry who had one of the few impressive plays, a 17-yard grab on a tight end screen that saw him run over talented safety Kevin Byard. It set up a fresh set of downs on the offense’s only touchdown drive of the game. With Kevin Rader entering the game inactive and Pat Freiermuth leaving with a concussion, Gentry became the only tight end available, and wound up playing a season-high 76% of the team’s snaps.

Big picture, Gentry believes the offense will be hard to handle when they get on track.

“And so I think when we can cohesively get everything together every single play, I think we’re gonna be pretty hard to stop.”

Gentry’s tone is an optimistic though expected one. Running the ball has been like pulling teeth all season, a clunky first down offense (31st at 4.4 yards per play) that’s led to an equally clunky third down unit, especially in recent weeks.

The Steelers will need a perfect game, or at least a no-hitter, if they want to knock off the red hot Kansas Chiefs at Arrowhead Stadium in Week 16. Winners of seven straight, Patrick Mahomes and their defense have found their groove. Over their last five games, they’re averaging 32.8 points per game and allowing less than 14. The Steelers will need defensive stops, but they’re also going to need points. A lot more than they’ve been scoring as of late.