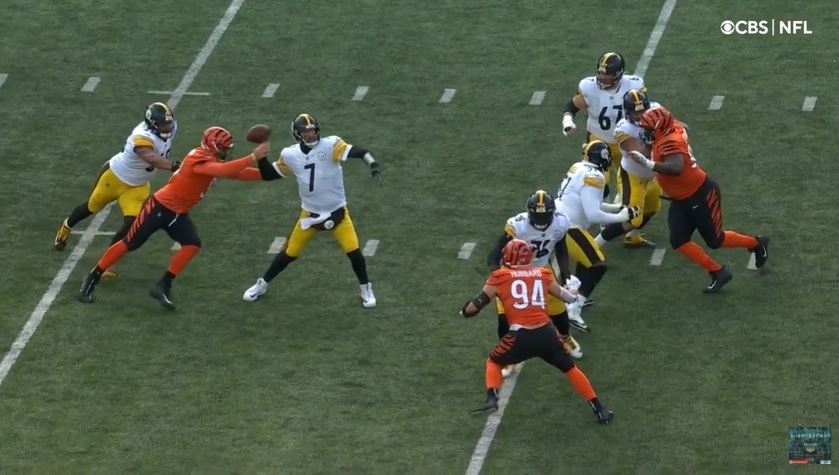 Catching up on sack breakdowns from the past couple of weeks. I’m saving the Minnesota Vikings disaster for later in the week because there is so much to discuss and comb through there. Today, we’ll break down the four sacks allowed in the two weeks prior, the Bengals loss and Ravens win.

Steelers running a sluggo (slant ‘n go) route with Diontae Johnson, which you don’t really see on-screen in the clip I’ll show below. But you can see the pump fake by Ben Roethlisberger on the fake slant. So Roethlisberger needs time to let the route develop. He doesn’t get it.

Issue here is RG Trai Turner. #92 swims over him, causing Turner to drop his eyes/head as he gets beat. The slide protection is away from Turner on this play, so he’s on an island. And so #92, DT B.J. Hill, has a clear path to Roethlisberger and drops him.

Roethlisberger does slightly drift into the pressure, but it’s largely immaterial to the result. Hill has a free shot and makes quick work of Roethlisberger for the sack. Puts the team in third and long, though the Steelers didn’t run another play the rest of the half.

Third and long. Bengals showing their pressure package by mugging a LB and SS into the A gaps. But both bail out and it’s ultimately a four man rush. This isn’t a designed stunt to the left side (offense’s right) but it works in a similar way, the LDE countering inside and basically stumbling into a scrambling Roethlisberger, who awkwardly falls over him.

Weird one to assign blame here. Slide is to the right, and it felt like Kendrick Green was a little overaggressive with his help. But Turner is getting beat on the play, and Green actually did a good job to pick him up. Downfield, there’s nothing available for Roethlisberger to throw to. Bengals getting depth on their zone drop. Looks like Pat Freiermuth is open underneath but Roethlisberger is trying to throw to the sticks, understandable with the Steelers getting killed in the second half and needing conversions and chunk yards.

So a hard one to judge. I’m going to give half to the good coverage the Bengals had, that happens when an offense puts itself into third and long. And I’m actually going to blame Turner here for the other half. Him getting beat forced Green to pick him up and didn’t allow him to help on the LDE looping inside. That’s a tough play for Okorafor to try to mirror down the line like that into the A gap. So Turner’s miscue had a domino effect.

Blame: Half on Coverage, half on Turner

Really frustrating one here to allow a sack against a three man rush. But they can still become 1v1 battles, and that’s what happens here with LT Dan Moore Jr. He simply gets beat around the edge by RDE Trey Hendrickson. Hendrickson does a nice job to chop down Moore’s hands to soften the edge, and Moore never gets into Hendrickson’s pads, losing the corner.

Roethlisberger’s arm gets hit as he cocks back to throw, and the ball comes out, fumbled and recovered by the Bengals.

Clear-cut blame here. It falls on Moore, who gives up another sack this season.

Unusual sack here. Busted RPO where Ben Roethlisberger wanted to pass it, but it failed. So the line isn’t pass blocking and there’s no traditional rush here.

Here’s the pre-snap look. On these frequent RPOs the Steelers have run this year; if Roethlisberger gets a favorable coverage look, he’ll throw the ball pretty much regardless of box count. The pass is cheaper, easier and usually better yards.

So pre-snap, he sees the CB to the top playing off coverage. And it looks like he wants and thinks Claypool will sight-adjust and run a slant. 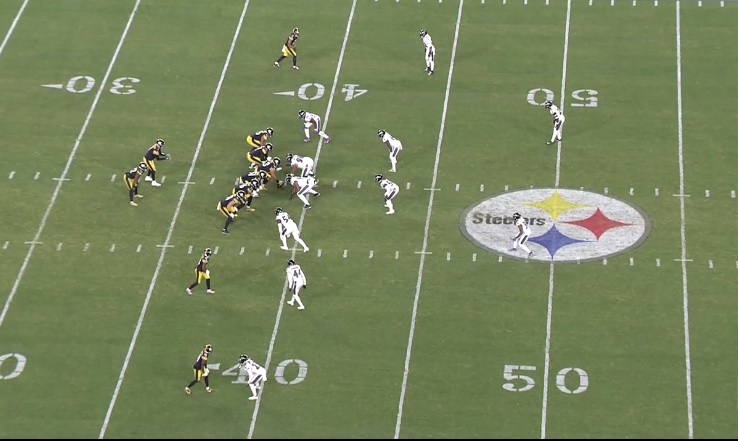 But Claypool stems vertically off the ball like he’s either running a go route, or running the cornerback off with speed on a run play with no pass component. Roethlisberger is ready to hit Claypool, but he never gets his head around. 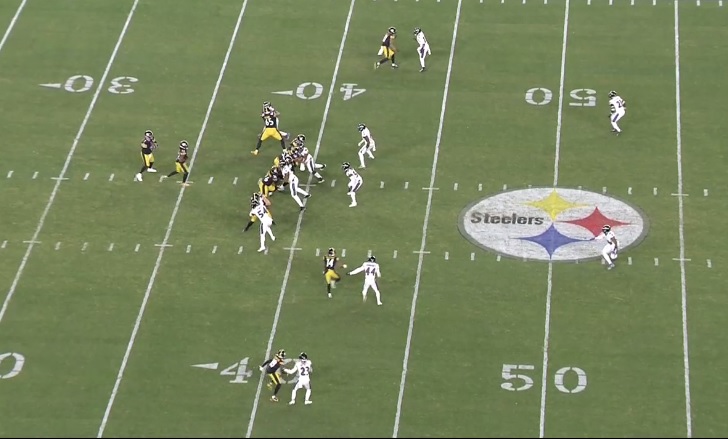 At this point, the play is pretty much busted. Hold on to the ball longer and you risk an ineligible man downfield penalty. So Roethlisberger runs and dives straight forward to avoid as much lost yardage as possible. Play goes for no gain, though they’re still counted as sacks in the NFL scorebook.

Blame doesn’t fall on anyone here but Claypool, who didn’t get the message and missed either the call or the check. Sack is on him.