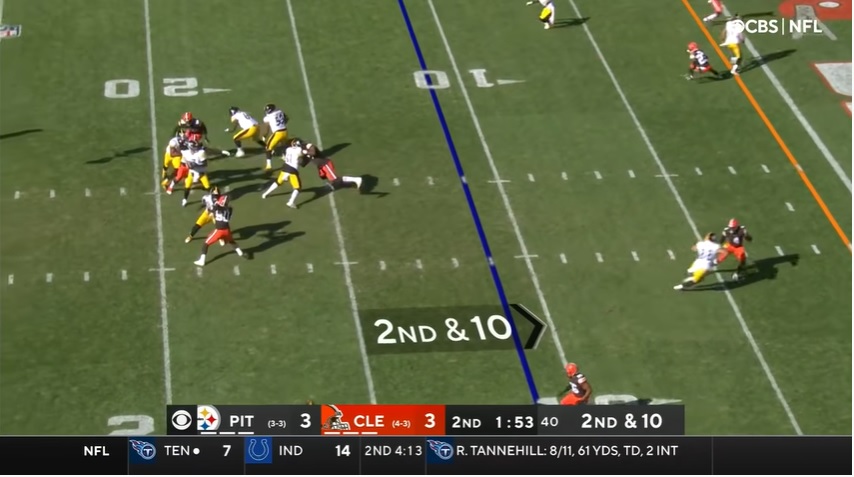 Dan Moore Jr. survived his first visit to the Myles Garrett experience. Though just barely. Moore struggled mightily going against Garrett back in Week 8. But it was enough to get the win. With a rematch looming Monday night, Mike Tomlin knows the Steelers will have their hands full yet again.

During his Tuesday press conference, Tomlin spoke to the difficulty of consistently blocking Garrett.

“We’re aware of when he’s in the game and when he is not,” he told reporters via the team’s YouTube channel. “But there’s also some challenges because they play him on the left side, they play him on the right side. It depends on whether he’s in conjunction, the last time with Clowney or with Tak or others. Certainly, we’re highly cognizant of where he is.”

Garrett has the ability to rush from either side or from the interior. But in their first meeting, Garrett spent most of his time as a RDE, going against a rookie in Moore. He repeatedly won those matchups, recording a sack against Moore. While Garrett had just the one takedown, he had several more pressures, and had it not been for Najee Harris’ awareness, would’ve had another sack on a 4th and goal play that ended in Pat Freiermuth’s game-winning touchdown.

Overlooked play of the day yesterday. Kudos to Ben Roethlisberger for flipping Harris from right to left side. But Harris' pickup here prevents Myles Garrett from getting to Ben.

Gave him needed time to hit Freiermuth for the TD on 4th and goal. Big-time play. #Steelers pic.twitter.com/uOa4mKdeOv

Moore, to his credit, has improved in recent weeks. Though Sunday’s outing against ex-Steeler Melvin Ingram was a rough one, Moore hasn’t allowed a sack since Week 12, though he still has allowed a team-high seven sacks this season (heading into the Chiefs’ game).

Pittsburgh asked a lot of of Moore in that first matchup, rarely giving him chip or slide help. Tomlin said that’s just a product of playing football.

More experienced and having faced him before, Moore should feel a little more comfortable taking on Garrett the second time around. Of course, that doesn’t make it much easier to stop one of the premier pass rushers in football. Tomlin said plenty have tackles have had their issues against Garrett this season.

“I was just looking at tape this morning and I saw Villanueva got put into one-on-one circumstances a few weeks ago on a play action pass. And it was a sack fumble. That’s just the challenge that is Myles Garrett week in and week out. It’s not one snap, it’s 75 or so snaps. So there’s some urgency there that’s required.”

Garrett registering a strip-sack-fumble against a tackle 1v1 isn’t exactly a ringing endorsement to do that this weekend. But odds are, Moore will be on an island several times in this game. If he can replicate the first outing, surviving and winning, it’ll be a good enough performance.