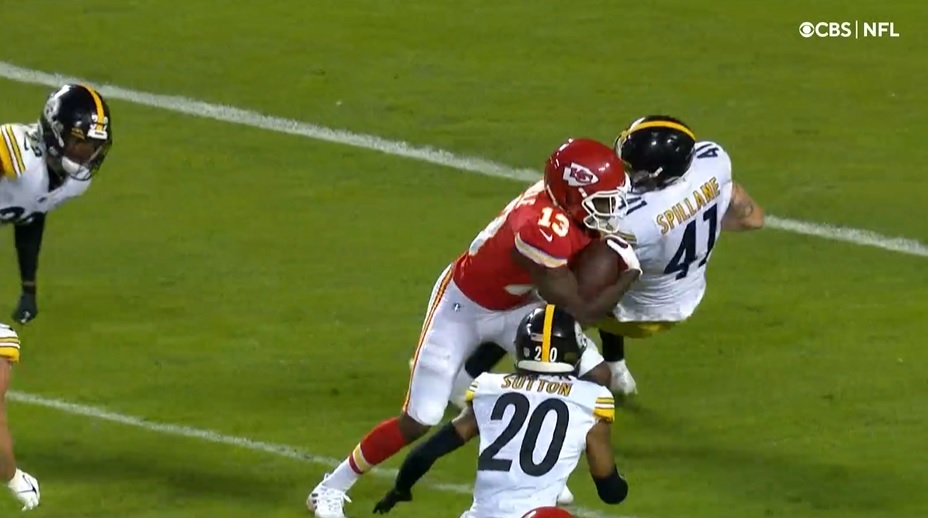 Hopefully some weird stats to pick your spirits up after the Pittsburgh Steelers’ terrible 36-10 loss to the Kansas City Chiefs Sunday.

– Ben Roethlisberger has thrown just one touchdown pass his last two weeks. That hasn’t happened in games he started and completed since Weeks 5-6 of the 2017 season, when he threw one over that span. The one score, funny enough, came in a 19-13 win over the Kansas City Chiefs. One TD pass wasn’t enough to beat them yesterday.

– Pittsburgh has now allowed 100+ yards rushing in eight straight games. That hasn’t happened over the course of one season since 1956, thirteen years before Chuck Noll’s arrival. In fact, Noll was starting for the Cleveland Browns that year. That’s how long it’s been.

– Najee Harris has just two runs of 15+ yards since Week 6. He recorded a 21-yarder yesterday. Mason Rudolph’s 26-yard scramble against Detroit is still the longest run of the season, while his 17-yard run against the Chiefs is legitimately one of the top ten longest runs the Steelers have this season.

– Until two weeks ago, Minkah Fitzpatrick had never recorded more than ten combined tackles in a NFL game. Against the Titans, he had 14. Sunday, he had 12. He’s up to 114 tackles on the season. I believe that to be the most by a Steelers’ DB in team history. Since 1987, it’s currently tied for the 15th-most tackles in a season alongside Hardy Nickerson, Lawrence Timmons, and Earl Holmes. Fitzpatrick has a good shot to crack the top five, which would require 128 combined tackles.

– Robert Spillane’s 13 tackles Sunday are a career high for him. They’re the second-most tackles he’s ever had in a game, college or pro, only surpassed by the 14 he had in a 2016 win over Eastern Michigan while a member of Western Michigan.

– Pittsburgh has been outscored 114-19 in the first half of their last six games.

– Pittsburgh has lost the time of possession battle in six straight games.

– Roethlisberger has been sacked 35 times this season, the most he’s been taken down in a season since 2013, when he ended the year with 42 of them.

– Now with 67 of them, Najee Harris has set the Steelers’ rookie record for receptions, breaking Chase Claypool’s record of 62 set last year.

– Finally, the Steelers are currently -70 in point differential this season (i.e. opponents have scored 70 more points than they have). That’s on track to be the team’s worst mark since 1988 when the team was -85 on the season. If this team surpasses that mark with a -86 or worse, it’ll be their biggest deficit since 1969, Noll’s first year with the team (-186).

Since 1990, the Steelers have only been negative PD five times. From 2004 to 2019, it happened just once, the ’19 season without Roethlisberger. Even then, they finished the year at just -14.