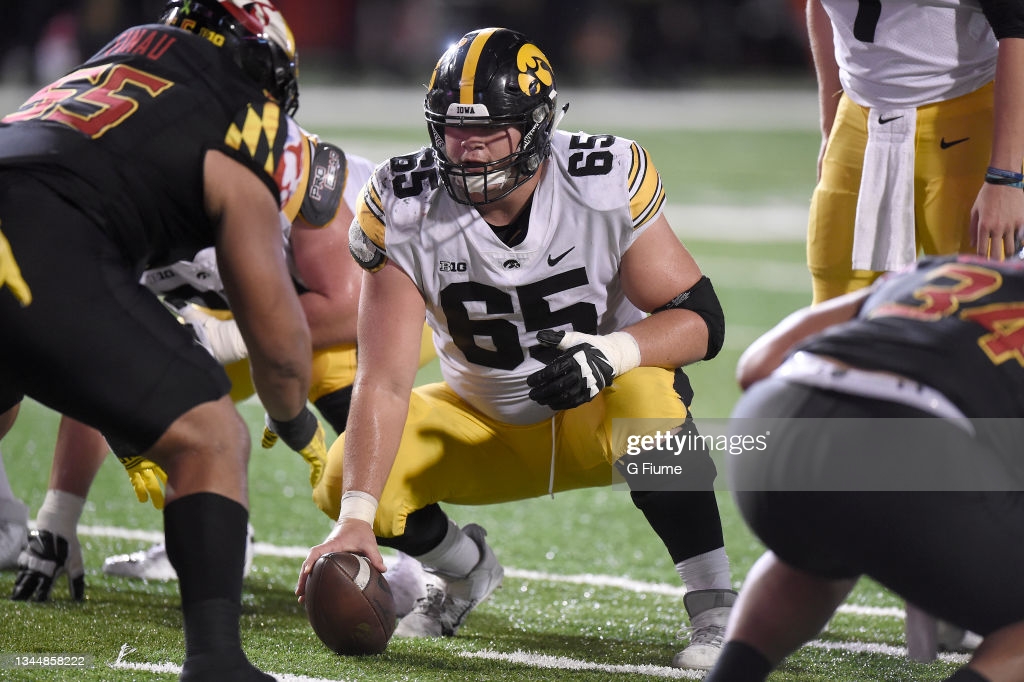 The Iowa Hawkeyes went into Lincoln, Nebraska last Saturday hoping to hold off the rival Huskers for a chance to win the Big Ten West. They would have to win this matchup and get help from Minnesota who would have to beat Wisconsin to win the West outright and claim a spot in the Big Ten Championship Game against the Michigan Wolverines. The Golden Gophers took care of business against the Badgers, setting Iowa up to clinch if they could hold up their end of the bargain. After trailing be double digits heading into the fourth quarter, the special teams and defense got points on the board and set up the Hawkeye offense to take the lead late and win the Big Ten West.

While RB #15 Tyler Goodson had a good game on the ground and QB #7 Spencer Petras put it together late on some clutch drives, it is All-American C #65 Tyler Linderbaum that needs to be highlighted after this performance. Linderbaum has strung together an impressive season so far and is the likely top center prospect in the 2022 NFL Draft. Being an Iowa native from Solon and a former defensive line recruit, Linderbaum’s rise to prominence is quite something to behold considering he’s playing a different position than what he was recruited for.

Being an Iowa native and a certified strength and conditioning specialist, I had the opportunity to personally work with Linderbaum back in spring of 2019 in the weight room and on the field. His feats of strength were impressive to see for what was then a redshirt freshman, moving loads of weight with ease with explosive power. That strength pops on film watching Linderbaum in the run game, consistently locking on defenders and finishing them into the turf like he does on this rep against the linebacker, planting him on his back.

Linderbaum stands 6’3, 290lb and has a stout, squatty frame built to play in the trenches. He plays with great leverage as a run blocker, having the leg drive and punch to displace defenders off the LOS with a good push. Watch the QB Spencer Petras snap the ball and follow Linderbaum up the middle to cross the goal line on this go-ahead TD to put the Hawks on top in the fourth quarter.

Here is an aerial view of the same play, showing Linderbaum’s surge forward after the snap bulldozing his way across the plane, thus paving the way for the QB to score.

Now most scouts and fans alike will see Linderbaum’s weight and be considered whether he can drop anchor against bigger interior defensive linemen. I will agree that there are instances where Linderbaum does give ground when is knee and hip bend isn’t there like on this rep where the defensive tackle gets his hands inside Linderbaum’s chest with good leverage as Linderbaum stands up on the initial punch, flailing backward as he attempts to recover which he manages to do and push the defender out of the pocket.

However, when Linderbaum stays low to the ground and plays with good leverage, he can move just about anyone off their spot. Watch on this inside run play where Linderbaum gets underneath the defender, getting good hand placement inside and runs his feet on contact to move the defensive linemen off his spot and ends up finishing him to the turf, clearing a hole for Goodson up the middle to pick up the first down.

Along with being physical strong, Linderbaum’s athleticism out in space is quite a sight for a player of his size. He was near the top of every sprint and agility drill we ran for the linemen and even beat several linebackers and tight ends with his sneaky speed and acceleration. He is phenomenal on the move as a blocker, climbing to the second level and picking up blocks in space to spring big runs. Here is one example against the Huskers where Linderbaum locates the backer in the second level and shoves him out of the way, springing Goodson for a big run up the left sideline, setting up the Hawkeyes for the go-ahead score.

Here is another example of Linderbaum working in space, quick chipping on the nose tackle before climbing to pick up the backer which he makes contact with and attempts to run out of the play. Now Linderbaum should have put his helmet on the backer’s inside shoulder to prevent him from crossing face and putting a hit on the runner who fumbles the ball on the play, but we do see how fluid in space Linderbaum can be for a near-300lb center.

When it comes to pass protection, Linderbaum is as sounds as they come, playing with good pad level and good hip and knee bend to have the leverage to anchor in against larger interior rushers. He is a smart player who recognizes blitzes, stunts, and twists and is ready to pick up defenders coming free. Just watch this rep where Linderbaum recognizes the twist and passes off one defender to the LG as he picks up the defender coming around him, keeping him out of the pocket and gives Petras time to throw downfield.

Here is another example of Linderbaum picking up a twisting defender coming from the edge back inside, keeping the pocket clean as Petras checks down to the receiver near the LOS who picks up enough YAC to move the chains.

Overall, Tyler Linderbaum brings a combination of strength, power, and smarts to the center position and has consistently shined in the trenches for the Iowa Hawkeyes who have a long history of churning out pro-ready offensive linemen to the league. His lack of length and sheer mass may concern some in terms of holding up against the large nose tackles at the next level, but his wrestling background (he beat Tristan Wirfs for the Iowa State title back in high school) paired with his squatty frame aid in his ability to win the leverage game against most defenders he will see, holding his own against sheer size and power both in the run game and in pass protection.

When working with Linderbaum, I couldn’t help but appreciate his work ethic and drive to consistently get better every day. He was one of the most impressive linemen I have laid eyes on after working with the Hawkeyes and the Gators and combine that with his mental acumen for the game as well as his first-class character and you have yourself a blue-chip prospect both as a football player as well as a person. It will be interesting to see is Linderbaum will be on Pittsburgh’s radar after drafting Kendrick Green this past season, but given the Steelers’ need for improved OL play especially in the run game and their affinity for SPARQY athletes with hearts and smarts, “Lindy” should be high on their board.

What are your thoughts on Tyler Linderbaum’s performance against Nebraska? Do you think he has the skillset to be considered C #1 in this draft class? Does his overall lack of size concern you? Should Pittsburgh consider selecting Linderbaum after taking Green in the third-round last year? Please leave your thoughts in the comments section below and thanks again for reading!