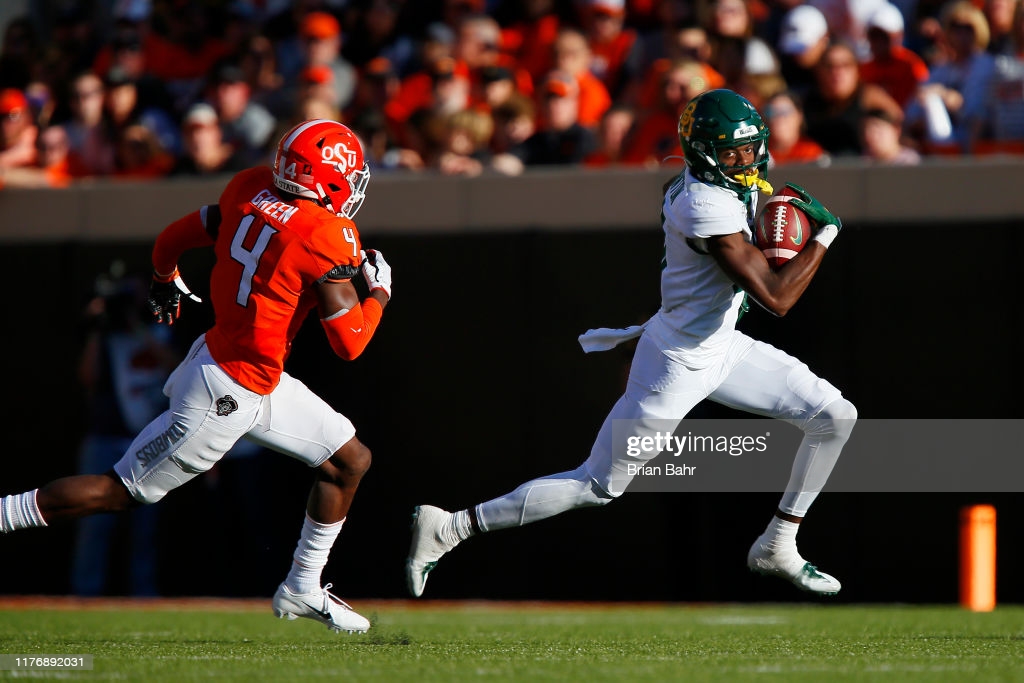 The Bears matchup with the CFP-hopeful Cowboys Saturday in attempt to cap off a successful season in HC Dave Aranda’s second year at the helm. The Bears will have to attack the Pokes’ stingy defense and will rely on #9 WR Tyquan Thornton to be the man through the air to get it done in this one. The 6’3, 182lb senior has great size and deceptive speed in the open field, presenting a HWS specimen for the QB to target in one-on-one situations. He has 875 yards and 8TDs on the season but was held in-check in his last matchup against Oklahoma State. Look for Thornton to try and break loose down the field in this one in attempt to pull off the upset.

For the Cowboys, all eyes will be on #3 QB Spencer Sanders, the signal caller of the offense. The 6’1, 210lb junior is the prototype air raid QB, having the acumen to hit the quick passes toward the sideline and over the middle, but also the speed and athleticism to keep it himself and gash defenses with his legs on the ground. His mobility allows him to throw off-platform on the run while evading pressure and while he doesn’t have a huge arm, he has enough velocity and touch to deliver a good-looking ball downfield. If Sanders has a good game and somehow gets the Cowboys into the CFP, look for the dual-threat passer to consider declaring for the 2022 NFL Draft.

The clash of the titans occurs Saturday afternoon in Atlanta with the Bulldogs facing the Crimson Tide for the SEC crown. The Georgia defense has played at record-setting levels this season, and their leader #17 LB Nakobe Dean will have to have a big game to hold off the Tide and clinch the #1 seed in the playoff. The 6’0, 225lb junior has come up big for the Dawgs defense in a multitude of ways as a run defender, pass rusher, and coverage linebacker. His ability to compensate for lack of elite size and length will be vetted as he attempts to neutralize the Alabama rushing attack while also covering talented TEs in the passing game. A good performance could cement Dean as the LB1.

On the other sideline, #8 LB Christian Harris will be the linebacker under the microscope for the Crimson Tide. The 6’2, 232lb junior has all the physical traits you want to see, having the size, length, and explosiveness that shows up on tape as run-and-chase linebacker who excels as a blitzer. The biggest question with Harris is his mental makeup, seeming a little slow to make reads at times and can struggle in pass coverage assignments. If Alabama is to shut down the Georgia ground game, Harris must have a strong performance, showing scouts that his physical gifts can translate to stellar play at the next level and deserve Day One consideration.

The Wolverines square off with the Iowa Hawkeyes Saturday evening in Indianapolis, likely securing a berth in the CFP with a win. While all eyes will be on the edge tandem for the Maize and Blue, #30 DB Daxton Hill is the player Pittsburgh fans should have their eyes on. The 6’1, 192lb junior is a versatile defensive back, having played single-high safety, split zone safety, strong safety, nickel/dime corner, and even as an outside cornerback during his time at Michigan. He has great range and the ball skills to take the ball away as well as the aggressiveness to stick defenders coming downhill in the run game. His talent and playmaking ability suggest his best football is ahead of him heading to the pros.

For the Hawkeyes, the attention will be on the big nasties in the trenches, more specifically #65 C Tyler Linderbaum. The 6’3, 290 junior is a finalist for the Lombardi, Rimington, and Outland Trophies has put together two dominant seasons at the center position for the Hawkeyes, looking to be the next great Iowa offensive lineman at the NFL level. His combination of power and mobility make him a mauler in the run game, moving out in space with ease and picking up blocks down the field and proceeds to put them into the ground for pancake after pancake. He is a smart player who also excels in pass protection and will have his hands full against a talented Michigan defensive front in this matchup.

The Ducks look to secure another PAC-12 Championship against the Utes Saturday and will be relying on their talented defense to neutralize the hot Utah offense. #2 CB Mykael Wright doesn’t garner the same headlines as some other names on the Ducks defense, but the 5’11, 178lb junior has the makeup of an NFL-caliber CB that can run with receiver man-to-man and has the ball skills to break up passes and force turnovers. His slight frame makes it difficult for him to shed blocks against the run, meaning his effort will have to be on-point against a team that wants to run it down your throat. Should Wright have a strong performance, he could solidify a spot as a top-100 selection come April.

For the Utes, all eyes in the scouting industry will be one #0 LB Devin Lloyd and his performance against the Ducks offensive attack. The 6’3, 235lb senior is the definition of a playmaker, excelling near the LOS as a run-and-hit linebacker against the run as well as a pass rusher that can put his hand in the dirt on the edge. Lloyd also does well in pass coverage, using his length to cover passing lanes and has several INTs under his belt. He seems a little slow processing the play with his eyes which can cause him to be out of position at times, so a performance avoiding mental errors with a splash ply or two will do wonders for his draft stock.

A new era has arrived in the ACC with the Panthers squaring off against the Demon Deacons for the conference title. For Pitt, #8 QB Kenny Pickett looks to cap off a Cinderella-like season where he went from just another name to throwing for over 4,000 passing yards and tying for second in the FBS with 40 TDs. The 6’3, 220lb senior has the mobility to maneuver the pocket and throw on the run as well as step up and deliver deep balls down the field. Some consider Pickett to be the second coming of Joe Burrow whereas others see him as a high-floor, low-ceiling player at the professional level. He gets his chance in a potential shootout to make his case to be QB1.

For Wake Forest, #10 QB Sam Hartman has also enjoyed a breakout season at the helm of the Demon Deacon offense, throwing for 3,711 yards and 34 TDs while adding 342 yards and ten scores on the ground. The 6’1, 208lb redshirt junior doesn’t have the prototypical size you like to see for QB prospects, but his mobility allows him to maneuver the pocket well as well as escape and pick up yardage when the play breaks down. He can hit every throw in the short and intermediate quadrants of the field as well has the touch to drop the deep ball in while lacking elite arm strength. Hartman can struggle with accuracy at times; thus, his decision making will be key in this game.