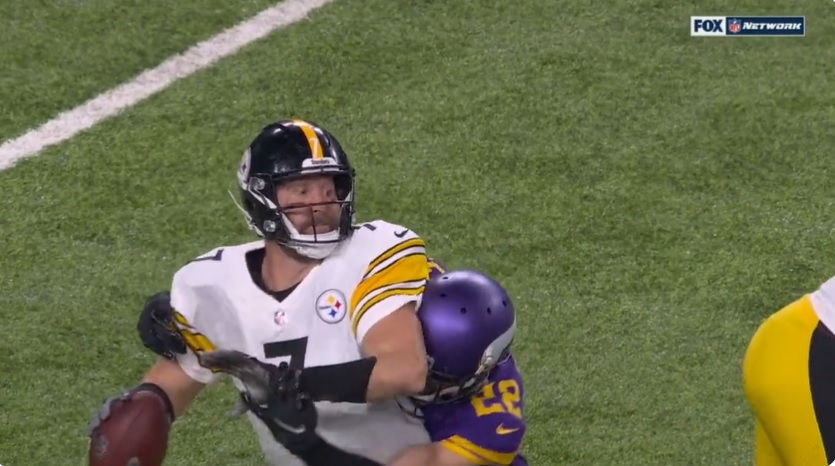 Back with another sack breakdown to review the – sigh – five sacks allowed by the Pittsburgh Steelers in Week 14 against the Minnesota Vikings. Buckle up.

Before we get into this week’s breakdown, check out the video I did here that goes through the final three in-depth. I’ll provide an abridged version of those three in this article but the video will have the complete explanation of breakdown and blame.

First one. Seeing that “Mug” pressure with both LBs in the A gaps Mike Zimmer did throughout the whole game, including almost every third down. But they bluff out and both LBs drop. Both guards have issues on this play handling power, LG John Leglue and RG Trai Turner. Turner gets walked back by former Baltimore Ravens’ NT Michael Pierce, who leverages Turner and overpowers him. Turner attempts to re-punch but can’t get his hands in control and Roethlisberger’s arm is hit as he threw, a fumble he fortunately recovered.

While Leglue had issues and the pocket got constricted, Kendrick Green helped clean things up to the slide/zone side. Turner lost his 1v1 battle so the sack goes on him.

Playaction and a longer developing concept, a Yank (over routes) between Pat Freiermuth and Diontae Johnson. But with the Vikings dropping seven into coverage to match three, a two-high look from the safeties, there’s nowhere for Roethlisberger to throw to.

Leglue and Green lose their blocks as teammates go to help others. Green in particular lunges and gives up the edge, allowing Armon Watts to run through and track Roethlisberger down. I’ll put half on the coverage here but the other half on Green for poor technique, not bringing his feet and legs to stay square to the block.

Blame: Half on Coverage, half on Green

Now we get into the sacks we break down in the video linked above. The third down Mug pressure Zimmer brought most of the game. Here, it’s a six-man protection and it is blocked up well. Each guy does their job, man-blocking across the board.

The Vikings overload the left side away from the center slide, dropping out the other (offense’s right) side. They simply bring more to that side than Pittsburgh can block. Dan Moore and John Leglue are responsible for the down linemen, the RDE and RDT, while Najee Harris has to take the LB to the offense’s left A gap. There’s nothing built into the protection to block Smith so he must be “hot” and if he rushes, the ball must come out quickly.

Here’s how the protection scheme looks. 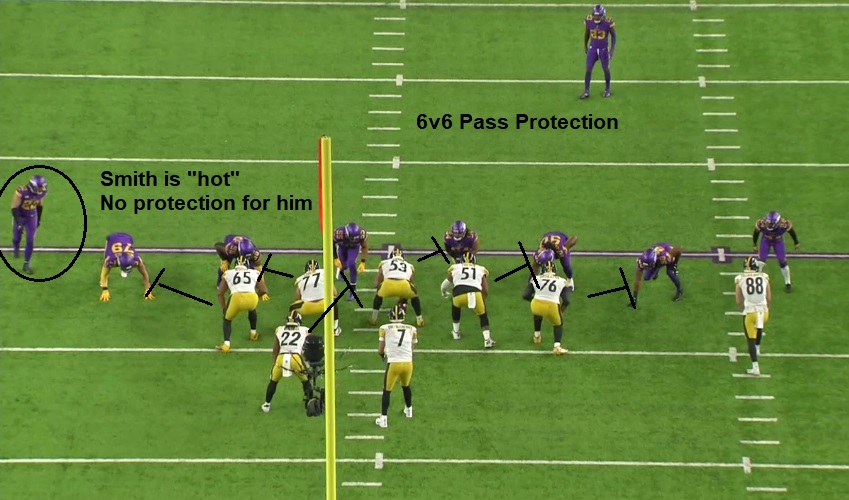 But partially because it’s third down, the ball isn’t designed to come out hot and no one is running a short route. Smith has a free shot at Roethlisberger and nails him from the side.

Needed to be a built-in hot here. Kudos to the Vikings for good scheme and the Steelers didn’t have an answer. Chalking this up to “scheme” overall on both sides of the ball.

Another mug-look. This time the Vikings have a free overload rusher the protection can’t pick up and there appears to be some miscommunication. Center starts the slide and Green starts sliding to his right, meaning Najee Harris is responsible for the away-side ILB. The defender I have circled is “hot.” Like Smith above, there’s nothing to pick him up in this six man protection. 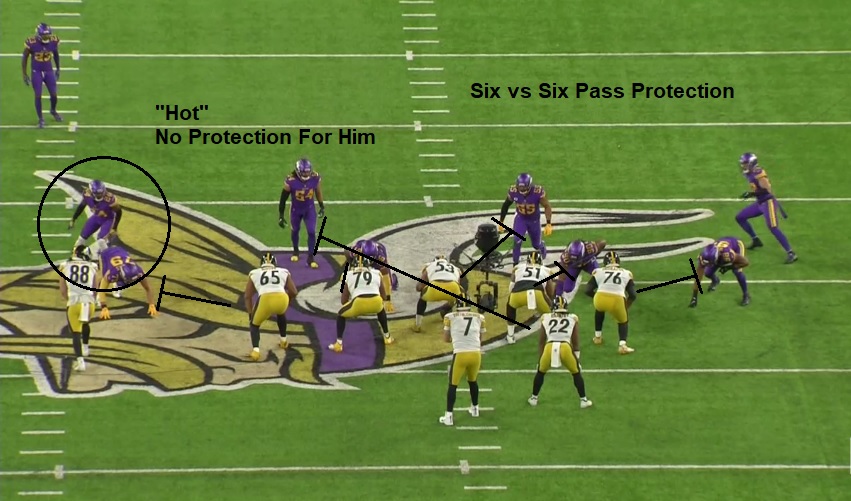 But Harris is a tick slow in picking it up, unsure of which way Green was sliding and what LB Harris was responsible for. He can’t get to LB Eric Kendricks (#54) in time and Kendricks is the first man there with the DB coming in behind even if Harris would’ve picked him up.

Harris has been really good in pass pro this year but I put it on him. In the clip, I know it’ll look bad to see Rashaad Coward, Kendrick Green, and Trai Turner all take one guy but they carry out their assignments here. Harris doesn’t. Draw it up on the board and it makes sense why, as we did above.

Steelers trying out their seven man protection to protect against these overload blitzes and free rushers. So they’re working out of 12 personnel with Zach Gentry staying in to block on third and six, an obvious passing down. But the Vikings bluff out and bring just four, dropping seven into coverage with just three in the pattern. Force Pittsburgh to respect the blitz by going heavy, staying into block, and then drop out and easily cover the routes. Chess, not checkers from Mike Zimmer.

On paper, this is blocked up meaning the Steelers are “safe” and there is no need for a hot route. They have seven blockers for seven potential rushers. 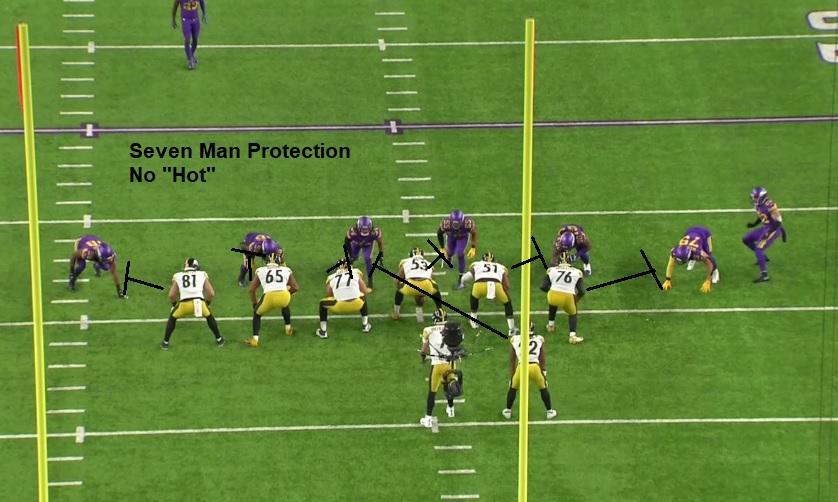 On the snap, Trai Turner – for some reason – slides the wrong way. Goes to his left when he should go to his right, sliding away from Green. I don’t know who he thought was going to pick up the DT, #90 Sheldon Richardson. Wasn’t going to be Chukwuma Okorafor (had the RDE) and it’s not going to be Najee Harris, who isn’t going to block a DT and is responsible for the LB anyway.

Turner just got wires crossed here and Richardson runs in free for a quick Roethlisberger takedown.

Really ugly to see all the unblocked lineman standing around but this falls on Turner. Frustrating there’s been so many cases this year of Pittsburgh having more blockers than rushers and still allowing sacks/pressure.