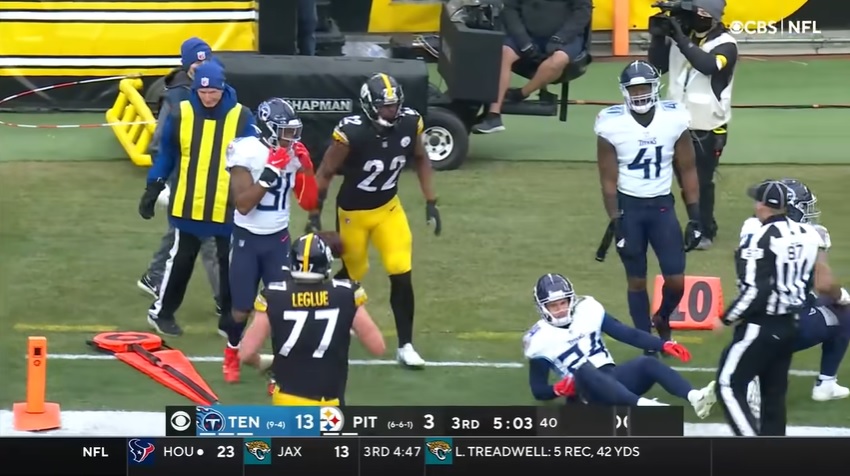 Statistically this was Harris’ worst game of the year with just 26 yards of offense but the entire offense struggled to produce yards. His vision and ability to read blocks is really impressive. He see’s defenders cutting in the hole before it happens and he is already moving elsewhere. He gained most of his yards on two carries but those were cancelled out losing eight combined yards on two carries late in the game. He did have a nice block for Chase Claypool on an end around.

The passing game was a strange adventure. It started with a two handed chest pass that was incomplete. They tried two screens unsuccessfully. The quarterback spoke to Harris after the first one showing the possibility of some miscommunication and he ducked under the ball on the second attempt. His receptions came on check downs. His awareness of where to be in pass protection was again very good but didn’t have to help out all that much.

Freiermuth was able to make some plays before having to leave the game early. His first reception was on stick route making a nice hands catch, breaking the tackle of two defenders and getting five extra yards. The next two receptions came on dump passes over the middle late in the second quarter. He gained seven after the catch on the first and three on the second showing good clock awareness to give himself up and save time. The final reception on a shallow cross resulted in the hit that knocked him out of the game.

He did a nice job to position himself on his run blocks but needs to continue to improve on sustaining and moving laterally to mirror defenders. His best blocks this season have been in space and he had a couple more blocking for Diontae Johnson and Claypool each on their runs.

There were some positives and negatives for Green in this game. I felt he was better than last week which was not a hard thing to achieve. As a run blocker he had some struggles. He’s not getting a lot of movement in his blocks and got beat by lateral agility on an RPO. He faced a couple of physical shots from a linebacker and got stunned on both. His balance has been shaky and he gets pin balled at times and ends up on the ground.

I felt his pass protection was better this week despite inconsistent punch. He had a couple nice ones to stand up defenders and others seem tentative. He displayed better awareness on twists and showed better lateral agility to stay in front of pass rushers. On a late second quarter play on a short pass over the middle his defender didn’t rush so he made sure he couldn’t get his hands up in the passing lane.

Here is the heads up play by Green (53) to not let the defender get his hands up.

Moore came into this game with a spotlight on him facing two really good pass rushers and he performed well. He didn’t have any issues on speed rushes using his length to hold off the defenders and push him past the quarterback. He slid well to handle counters to the inside and did a nice job adjusting his hand versus power rushes to stymie the rusher. I only counted one rep where he was pushed back which is a big improvement over the course of the season.

He got beat with lateral agility on the same play RPO play that gave Green an issue. Run blocking over all was adequate. Overall improvement is needed but nothing egregious to report in this game. The three plays at the goal line were a good learning experience. His defender fired out on the first play driving him back. Thinking it might happen again on the first QB sneak he fired out and the defender swam over him. On the third rep he was more under control and stalemated with the defender.

Loudermilk continues to make plays against the run doubling his game high in tackles. He played from the 0 technique over the center out to the 5 technique outside the tackle. He performs best at a two gapping defender when he can gets his hands on the defender and shed them to make plays. He made two plays on the front side when he was able to control and shed blockers. He also made two from the backside holding off blockers while not overrunning the play. He needs to work on his anchor to hold his ground versus double team blocks.

As a pass rusher he is inconsistent with his hands and will sometimes lead with his shoulder. When he uses his hands he has a chance to be disruptive. He does have the awareness to get his hand up in passing lanes.

Loudermilk (92) over the tight end will control the blocker, force the play back inside and make the tackle

Norwood’s role continued to be the nickel defensive back in passing situations. Seven of his snaps came on third down and one on fourth down. He played Zone coverage on three snaps and Man coverage on five with three of those coming in the red zone. He was only targeted once in Man coverage late in the game and he ensured the player didn’t get out of bounds. He knows his role and continues to execute that role well.

Harvin’s up and down season continued and the first three punts did not yield hopeful results. The first punt was not good and it looked like he kicked it off of his ankle. It travelled just 27 yards and went out of bounds. The second punt flew 51 yards which is good but was returned for 55 which is not entirely his fault but it was not good for him overall. Punt number three was again short and out of bounds moving the ball just 32 yards. Punt four travelled 40 yards and put the Titans inside the twenty. His final punt in the third quarter was the best sailing 49 yards with no return yardage.

Harvin got the proverbial vote of confidence from Mike Tomlin this week and I agreed with what he said. Keep putting him out there, let him work through it. His punting hasn’t been good but the team has bigger issues. Maybe Tomlin’s words will relax Harvin and get him to let it fly.