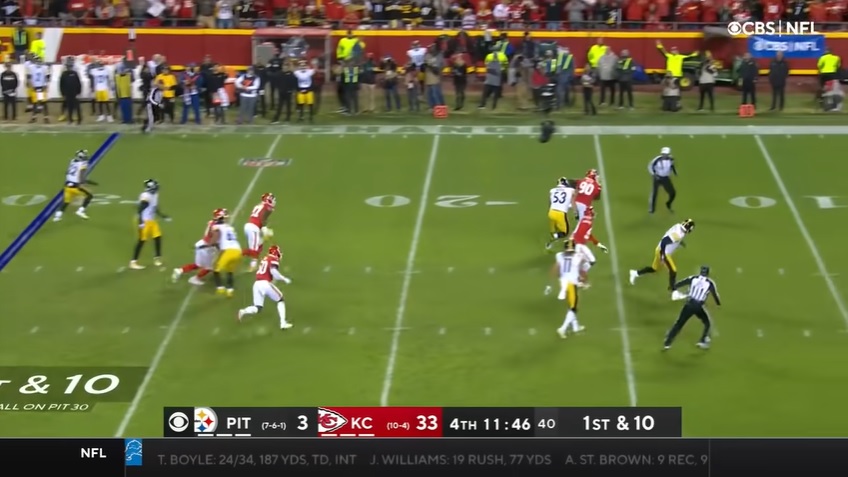 Productivity on the ground was up for Harris but a lot of that had to do with the defense the Chiefs were playing with a big lead. The positives from that including being able to see Harris not to have to fight for everything and what he might be able to do with improved offensive line play. He was able to break off a 20+ yard run and had a couple nifty runs in the second half. It was nice to see Harris actually be able to hit a hole without hesitation.

As a receiver he got a good number of targets but mostly as a check down option. He did have a screen when lined up as a receiver but with poor blocking the play went nowhere. As he has done most of the year he was able to get some yards after the catch with about 20 yards total. He only had a couple pass protection opportunities and he did a nice job overall with a good blitz pickup on the play were Diontae Johnson fumbled.

Here is a clip of Harris (22) hitting the hole without hesitation. He hasn’t had many opportunities to do this so I thought I would show it

Green’s up and down season continued with some good and some not so good. One of the first plays of the game he fired out and the defensive lineman easily swam over him and Green ended up on his face. He has struggled to stay on his feet all season. Overall, as a run blocker he did a nice job of getting in good position to execute the blocks but there was inconsistency. He did have a nice block on Harris’ big run but had a holding call on a run by Benny Snell later in the game.

In pass protection, some of his reps start out with potential but he becomes complacent. He stops moving his feet and relaxing. He doesn’t have the play strength yet to stay in an anchored position with regularity and he was bulled back to the quarterback at least twice. On screens he has the mobility to get in space but often it’s not enough to get him into position to block someone. On the quarterback fumble, he looked back between his legs like a shotgun snap with Ben Roethlisberger under center. He ended up getting beat easily to his left allowing the sack.

That aggressiveness we saw from him early in the season that would annoy defensive players is gone. I wonder if he has hit the rookie wall.

Here are a couple negative plays for Green (53). On each plays the quarterback is under center yet Green looks between his legs twice like it’s a shotgun play. On both plays the defender swims over him.

In recent weeks Moore had played better particularly in the passing game but this week he was better as a run blocker. He was positioned well on inside runs were he could wall off the blocker and got good push on down and double team blocks. Overall, I thought he was solid on running plays getting enough movement and sustaining well enough.

Playing against a former teammate this week may have hindered Moore this week. They had a good scouting report on where he has struggled and the Chiefs took advantage of it. On the speed rushes up the arc he was solid. The bull rushes gave him problems again this week with at least five trips backs into the quarterbacks lap and he allowed a sack in the first quarter. He has handled moves to the inside well this season but did get beat by a spin inside.

Moore (65) has had an issue with bull rushes this year and too often this happens. He allows hands into his chest and gets driven back.

Loudermilk got the start this week with Chris Wormley out and he played pretty well. After setting a season/career high with four tackles last week he topped that with six. He continues to show skills when playing as a two gap defender. He used good hand placement, pad level and play strength to shed blocks and make plays in his gaps. He trouble comes when he pops up out if his stance rather than moving forward and there were about three or four snaps where he was driven off the ball. His pursuit was good, showed good movement to the outside and even shot a gap to make a play down the line of scrimmage.

As a pass rusher he’ll try some different moves but he is still unrefined. He had about three pass rushes where he was able to get some solid push into the pocket. He will improve over time had has Cam Heyward to learn from as he grows. Overall, I think he did well for his first NFL start.

Norwood saw a sizable uptick in his snaps this week with the defense trying to keep Patrick Mahomes under wraps. Of his snaps, seven were playing a safety position and the rest were as a nickel corner. Following the game plan of the defense the majority of his snaps were in Zone coverage. He was also used to blitz a couple time as well as a couple snaps playing trial Man coverage with help over the top.

His lone tackle came on a nice read in Zone coverage. After starting to take his drop he recognized a receiver running a crossing route. He read the quarterback and gave chase across the field and made a shoestring tackle to save a bigger gain.