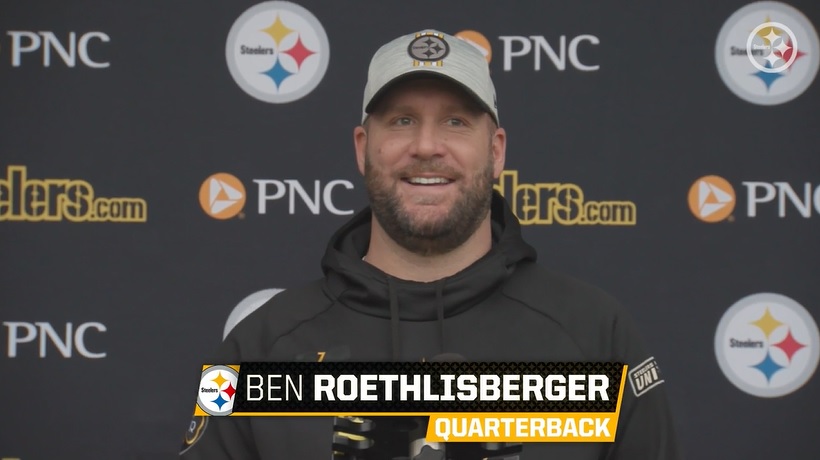 Headlines today will revolve around Ben Roethlisberger’s comments that Monday night’s contest against the Cleveland Browns is likely the final home game of his career. And rightfully so. Roethlisberger has more than earned that time in the limelight and chance to appreciate his career.

While this is a swan song for Roethlisberger, it’s not a swan song for the Steelers’ season. They aren’t a team out of the playoff race with nothing to gain but pride in victory. They’re no longer in control of their destiny, needing help to reach the playoffs, but Roethlisberger was quick to pull the focus from his career to what Monday night means for the team.

“I know that I still have it in the tank to go out there this week and next week and give it everything I have to do everything I can to get us into the postseason,” he said via the team website. “Because that’s always the ultimate goal is to win a Lombardi. And that’s still my goal. We’re not out of this thing yet.”

The Steelers host the Browns in Week 17 before travelling to the Ravens for the regular season finale. They’re two teams Pittsburgh has beaten this season. Ones by narrow margins but wins all the same. Cleveland and Baltimore are reeling, the Browns slogging through a season and failing to meet expectations while the Ravens are feeling the toll of their countless injuries, losers of four straight.

It’s likely one reason why Roethlisberger has been coy about his NFL future until today. A grand retirement tour is nice but could be seen as a distraction and taking the focus off the team and winning games. Above all else, Roethlisberger said his focus is on winning games.

“I just wanna win the football game. That’s all that matters to me. That’s always been my thing. I found out last week, I’ve got 91 wins in Heinz Field and broke a tie with Brett Favre for quarterbacks in one facility. To me, that’ll always mean more than yards and touchdowns. Wins. I’m sure you can go back to my very first press conference with some of you guys that were here, all I ever said I wanna do is win. And that’s what is most important to me. That’s what’s gonna be most important. I don’t care if it’s 3-0. I mean, I just wanna win a football game because it’s so important for our season right now.”

Roethlisberger has won 163 regular season games in his career. Making it 164 would be a great note to likely go out on. And if he and the team can make it 165, the Steelers’ season – and Roethlisberger’s career – might not be done yet.