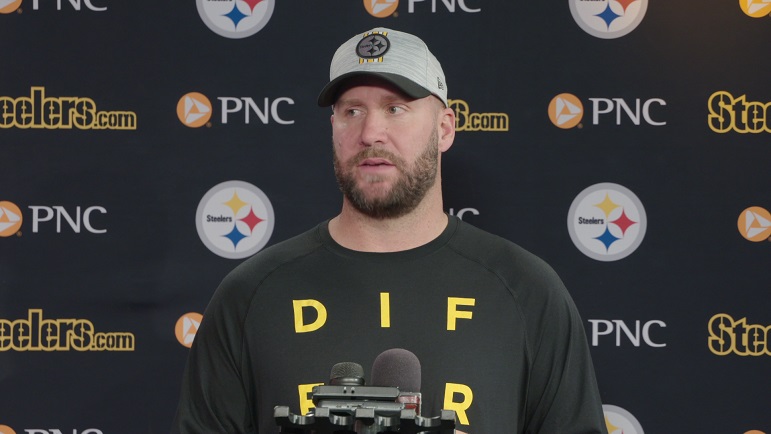 Pittsburgh Steelers outside linebacker T.J. Watt had an impressive performance in the team’s Sunday home win against the Baltimore Ravens, and that 3.5-sack performance should net him the AFC Defensive Player of the Week Award on Wednesday. That Sunday showing against the Ravens at Heinz Field should also put Watt in a great position to finally win a Defensive Player of the Year Award after the season ends. On Tuesday, Steelers quarterback Ben Roethlisberger wanted to make it clear that Watt’s 2021 season to date is no joke.

“I don’t wanna joke about T.J., because I think T.J. is like seriously one of the best players I’ve ever played against and I’ve played against some really good defensive guys, Roethlisberger said on Tuesday. And so yeah, I know I joked about that, but he truly is a special player. I’m glad that I’ve never been sacked by him because he’s not allowed to get close to me. But he is a game-changer and a game-wrecker. I’ve been a part of guys like that, Troy Polamalu, who can change a football game. And it doesn’t happen on defense that often. To be a literal game-changer on defense is something completely special and he should be recognized.”

Against the Ravens on Sunday, Watt really was a game-changer and a game-wrecker as he the former first round draft pick out of Wisconsin registered six total tackles (five solos), 3.5 sacks, three tackles for a loss, six quarterback hits and a career-high 12 quarterback pressures. Not only did Watt have that big of game on Sunday, but he did also so without practicing any with the team in the days leading up to the contest as he was on the Reserve/COVID-19 list.

In addition to clearing COVID-19 protocols on Saturday, Watt also cleared Cleveland Browns defensive end Myles Garrett for the NFL sack leader lead on Sunday. Garrett, who was on a bye in Week 13, entered Sunday with the league-lead in sacks with 13. Watt exited Sunday with 16 sacks, and that’s even with him missing two and a half games this season because of injuries.

Watt is on pace to set a new single-season sack record with five games remaining in the season. He needs 6.5 more sacks to top the 22.5 that former New York Giants defensive end Michael Strahan registered in 2001. If he stays healthy, it’s hard to see him not breaking that record. Should Watt indeed end the regular season as the new single-season sack leader, it’s hard to imagine him being snubbed out of the Defensive Player of the Year Award once again.

“I mean, I don’t know who else is the Defensive Player of the Year other than that guy,” Roethlisberger said of Watt on Tuesday. “I’m sure there’s other candidates that I just don’t know, but he should absolutely get MVP votes as well because that’s what kind of a player he is.”