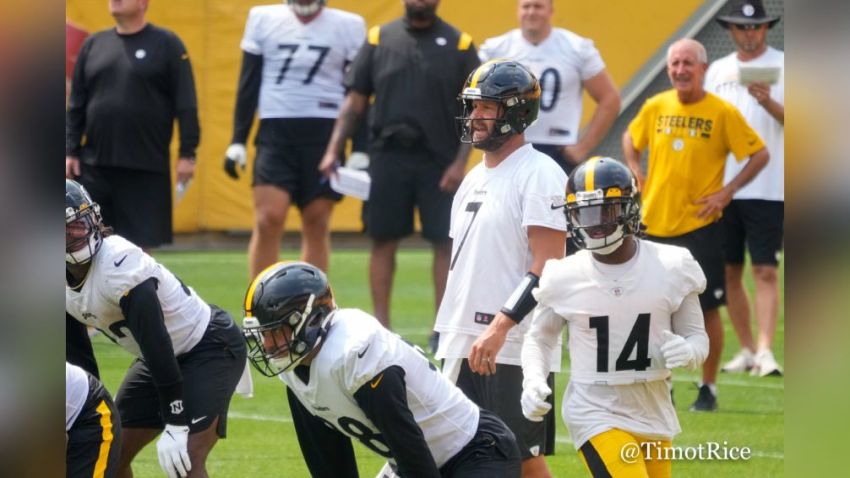 Remember Ben Roethlisberger’s nasty hip injury he dealt with early in the season? The one that caused him to basically stuff a pillow into his hip and led to some of the most uncomfortable camera zooms of the season? Speaking with reporters Thursday, WR Ray-Ray McCloud shared more information on Roethlisberger’s severe hip bruise, discussing exactly how bad it was.

“I remember one game, he was on the sideline and it looked like he had like four hip pads on,” McCloud said on a Zoom call via Steelers.com. “And the game before that, I think he had a bruise going from his knee all the way up to like almost his rib from his hip. And I remember he didn’t practice all week. He couldn’t tie his shoe. He went into the game and took every hit that came his way. Never complained. And he came to the sideline, ‘next series, next series.’ And just that mentality of do whatever it takes. And I think that makes him who he is.”

Roethlisberger suffered the injury early in the season, first listed on the injury report with a hip injury prior to the team’s Week 5 game against the Green Bay Packers. The injury, however, may have occurred during the beating he took in Week 2 against the Las Vegas Raiders. It greatly impacted his play, leading to mechanical and accuracy issues he tried to overcome.

In his video series Different, Roethlisberger discussed how much the injury hindered his play.

“Because my legs and my leg specifically have been hurting so bad, he said, “it’s really affecting my mobility, throwing, subtle movements in the pocket. Feeling like I can step in and make a throw has really been affected by how much it hurts.”

Despite what sounded like a nasty hip bruise, Roethlisberger did not miss a start and powered through the regular season. The only time he’s missed this season came in Week 10 when a last-minute COVID diagnosis shelved him for the Steelers’ tie to the Detroit Lions. Playing through the pain, he helped right a 1-3 start with wins over Denver in Week 5 and Seattle in Week 6. Roethlisberger played relatively well in both, throwing three touchdowns with no interceptions. Not bad for a guy who couldn’t reach down and tie his shoes.

As McCloud tells it, Roethlisberger never complained about the injury. True to form, he toughed it out, just one of many injuries he’s played through over his lengthy career. The injury seemed to subside, a bye week helped, and Roethlisberger hasn’t been under siege quite as often as he was to begin the year.

Roethlisberger told reporters today he has enough left in the tank to finish out these last two weeks and hopefully more should the Steelers sneak into the playoffs. He did, however, fail to practice Thursday due to a pectoral injury that’s lingered almost the entire year in addition to a right shoulder injury, which he referred to as general soreness weeks ago.