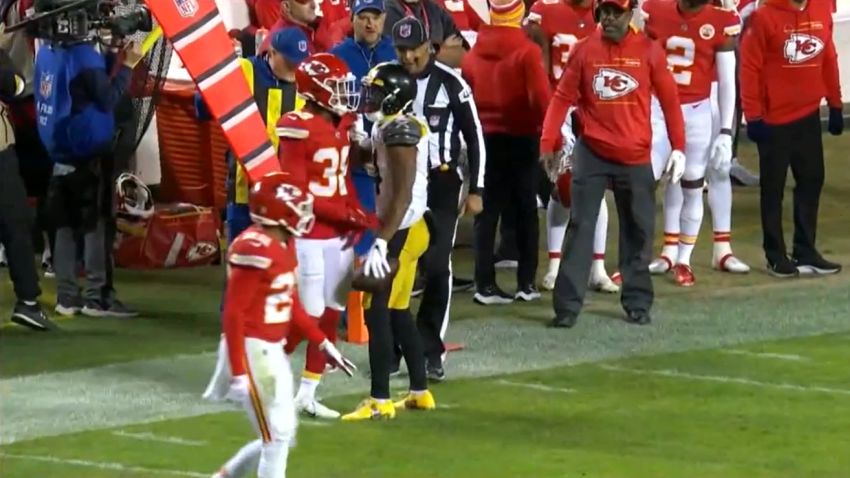 The 2021 NFL season has certainly been an interesting one, like any other, but every year has its own narratives to follow. This year, one of the storylines that ran as an undercurrent in many games was the point of emphasis officiating of taunting penalties.

I’m not sure if we could go so far as to say that it had a direct hand in deciding any games—though perhaps it had, as the Pittsburgh Steelers benefited from it against the Chicago Bears, for example—but in general, it hadn’t been a huge issue for the 7-7-1 squad.

In fact, head coach Mike Tomlin was asked about the taunting officiating at one point earlier in the season, and made it very clear that he was in favor of it. This past week, however, he did take issue with one penalty handed out to Ray-Ray McCloud, his own receiver, who was flagged after signaling a first down off of a third-down conversion, which happened to be in the face of Kansas City Chiefs cornerback L’Jarius Sneed.

Tomlin defended his player when asked about it later on, saying that he categorically disagrees with that particular flag. “I thought that Ray-Ray was signaling first down and he turned around to do so and the guy just happened to be there”, he said. “I think we’ve got to exercise some common sense”.

McCloud was asked about it yesterday, and gave his own account, setting up the background of how Tomlin put it on the receivers coming out of the half that they would be the reason they would get back into the game.

“As we went down and drove, me and Sneed were kind of competing, a healthy competition. Nothing crazy”, he recalled. “I remember him saying something to me in the first half on third down. When I caught it, I was going to point, by myself, and he kind of walked into it”.

“For me, unfortunately it was a flag, and maybe I learned my lesson for me not to celebrate and give the ball back to the ref”, he went on. “But for me, it was just more of, lock in, play ball, and [take it] play by play. It kind of bothered me, it pushed us back that drive. I don’t know if it harmed us or not, but just losing yards and in general flags are definitely not acceptable”.

When asked if the penalty had been addressed with him in any way, either on the sideline or after the game, he said that it hadn’t, but rather that he owned up to it on his own. “From my personal standpoint, I was just celebrating this first down and we walked into each other, and I think that’s what the refs had seen. I’m not gonna argue with the ref and then get another flag on the other side of the field. I took it for what it was, learned my lesson, and I appreciate Coach Tomlin having my back”.

The play in question occurred in the middle of the third quarter, converting a 3rd and 6. It would have put them on the Chiefs’ 23-yard line, but with the 15-yard penalty from the spot of the foul, the eight-yard reception pushed them back to the 38, seven yards beyond where the play began. They did end up with a field goal, their first points of the game.