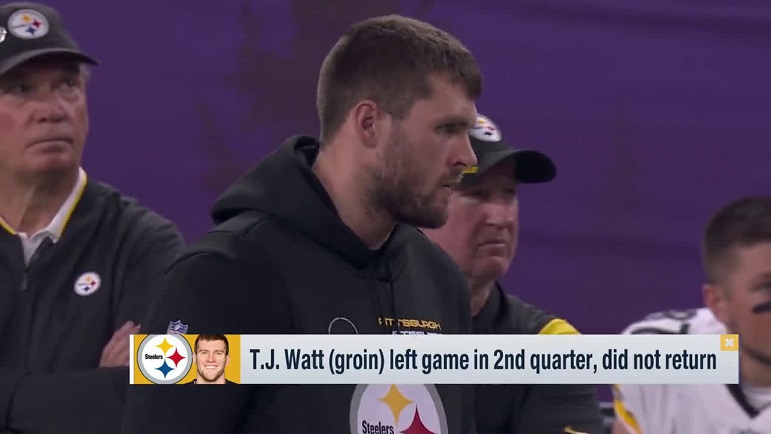 Will Pittsburgh Steelers outside linebacker T.J. Watt be healthy enough to play in the team’s Week 15 Sunday home game against the Tennessee Titans after suffering another groin injury during the Thursday night loss to the Minnesota Vikings? It’s certainly hard to say for sure as we sit here on this Week 14 Friday but Ian Rapoport of the NFL Network did provide some sort of an update on Watt during a morning segment on Good Morning Football.

That’s obviously not much to go on at this point but it’s likely all we will get for at least the next 24 hours. Watt did leave the Steelers Week 2 game against the Las Vegas Raiders midway through it with a groin injury and then ultimately sat out the Week 3 game against the Cincinnati Bengals due it. He left the Thursday night game against the Vikings in the first half and never returned to the contest.

Fortunately, Watt has more than a week now to get back from his latest groin injury as the Steelers next game isn’t until a week from Sunday. Steelers head coach Mike Tomlin won’t update the status of Watt until Tuesday so unless there’s another local ort national update on the prognosis of the Steelers outside linebacker, we’ll be waiting a few days.

UPDATE: Per Rapoport, Watt is believed to have suffered just a tweak to his groin Thursday night, source said. With extra time before they return to the field against the Titans on Dec. 19, Watt has a chance to be ready to go.