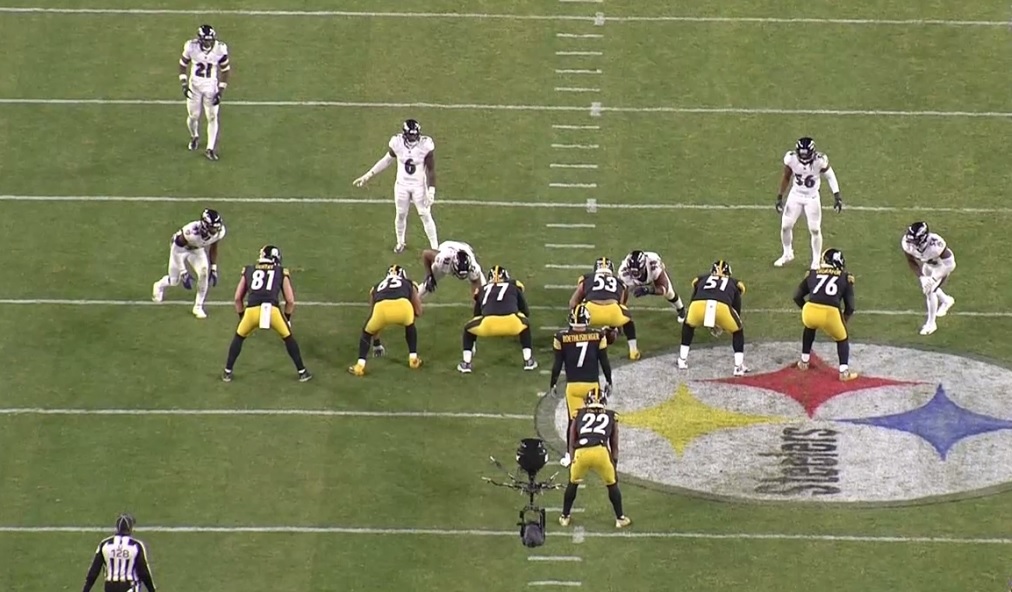 In his first year as Pittsburgh Steelers’ OC, Matt Canada’s #1 job has been all about finding the right fit between him and QB Ben Roethlisberger, entering his last season in the NFL. That happy medium between what Canada likes to run and what Roethlisberger is capable of doing. It’s the reason why shortly after Canada was promoted, we talked about the use of pistol in the Steelers’ offense as something the team should and could do more of in 2021.

For much of the season, it’s been largely an afterthought. Used occasionally, more than it had been in years past, but a small percentage of the Steelers’ plays. But on Sunday against the Ravens, pistol became a bigger part of Pittsburgh’s offense. Speaking with reporters Tuesday, Canada described its benefits.

“The pistol’s kind of a combination of both,” he told reporters in audio provided by the team. “It gets you in the gun but it still gives you kind of a downhill run versus a sideways. There are certain plays we like better out of it..”

Against the Ravens, Pittsburgh used pistol on eight of 58 snaps or 13.8 percent of the time. Two of those plays were passes, including Ben Roethlisberger’s 29-yard touchdown to Diontae Johnson. The other six were runs, averaging a whopping 7.2 YPC and 83.3 percent run success rate. In all, a highly successful formation.

Back in February, we wrote an article saying 2021 should be year of the pistol for Pittsburgh’s offense. The benefits of being able to use playaction while getting Roethlisberger away from center while preserving the downhill run game for Najee Harris. It’s something Canada himself has talked about and coached during his college stops.

Here’s how we concluded things.

“It’s the best way to mesh Roethlisberger’s strengths with Canada’s fingerprints on the offense. Everyone wins. Quarterback doesn’t hate how he’s used. Canada gets to run what he thinks works. And the run game will hopefully improve.”

Prior to the Ravens game, Roethlisberger had used pistol on just 19 total snaps, 2.9 percent of the time. Given its success against Baltimore, it’s something the Steelers need to strongly consider using the rest of the season. It doesn’t need to be the staple of the offense, the way it’s been for Baltimore with Lamar Jackson, but using it in that 15-20 percent range as we’ve suggested all year would be beneficial to an offense still struggling to produce.