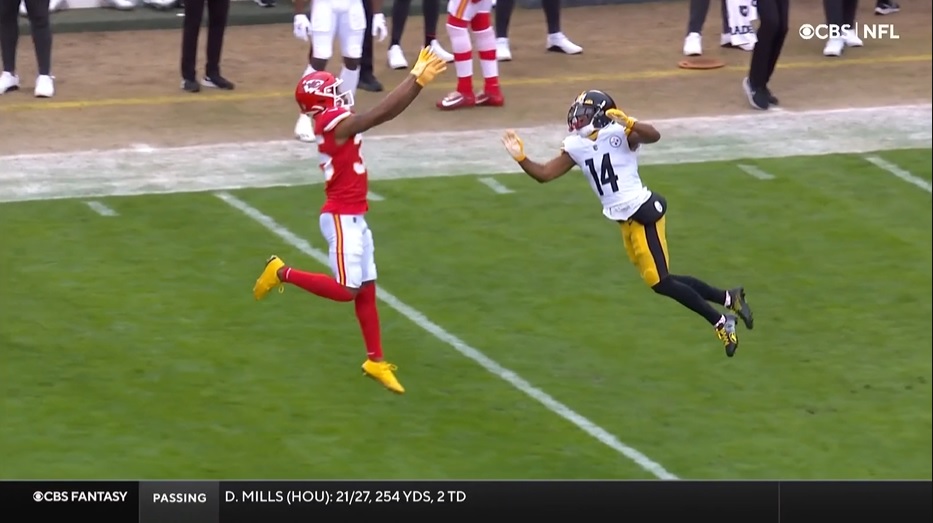 I completed writing 110 Holiday cards to Pittsburgh Steelers players, coaches, and staff on Christmas Day. Just something I do every season with notes to the owner Art Rooney II all the way to some hourly employees that I interact with during the season. Mostly just to greet the holiday season. This year one theme the desire to see the Steelers back in Latrobe for training camp this summer. But the immediate message was the team had three more games to make the playoffs in 2021.

As an average fan, my hopes remained that the team could do it. But realistically, I knew the chances of the Steelers winning three straight games were slim. What I did not expect was a performance so bad, that CBS switched their coverage to another game.

Humiliation has many synonyms. Here are a few: embarrassment, Ignominy, shame, disgrace, abasement, degradation …. I’m sure you can produce many more and could use them in a sentence to describe the quality of the Steelers performance in an important game. 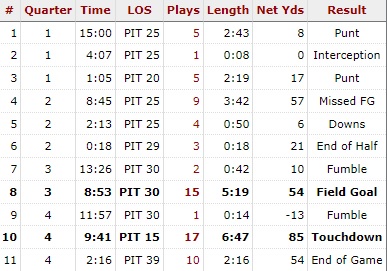 The Steelers had 11 offensive possessions. Seven of their possessions started after a kickoff from a Chief’s score. The Steelers tried a couple trick plays both resulting in a turnover. First, a flea flicker on the opening play of the second drive. Ben Roethlisberger threw a wounded duck that Kansas City converted into a 14-0 lead early in the game. Then on the first play in the fourth quarter, the Steelers tried a fake reverse. Kendrick Green missed his man who stormed in strip-sacking Ben. Green did save a touchdown by tackling the defender but the seven-yard line.

Then an unforced error when Diontae Johnson lost the ball as he switched hands. That was the second offensive play of the second half. Add a turnover on downs when Najee Harris ran wide on fourth and one. The play calling and the execution very inept.

Your very own Walter Payton Man of the Year nominee recovered the fumble 😏#WPMOYChallenge + @Mathieu_Era pic.twitter.com/ygVkRhORbd

Folks ask why Ray-Ray McCloud gets so many targets. More than Chase Claypool and James Washington. I believe it is because his skillset fits better within Matt Canada’s offensive scheme. And that is the problem with Canada in my opinion. He should be adjusting his gameplans to better highlight the skills of the best offensive players and to mitigate the weaknesses of an inexperienced offensive line. Instead, players forced to adapt to his schemes that they may not have the talent to execute. No one thought that Najee Harris had the burst of speed to outrace defenders to the corner when drafted. He’s a big powerful back designed to plunge ahead not a scat-back.

Breaking down the Steelers' failed 4th and 1 toss and why running the ball – inside or outside – was a bad idea.

For a RB, you never want to see 5v1 like you see below. Yikes. #Steelers https://t.co/PYBHv517O0 pic.twitter.com/kAiY6OlBBn 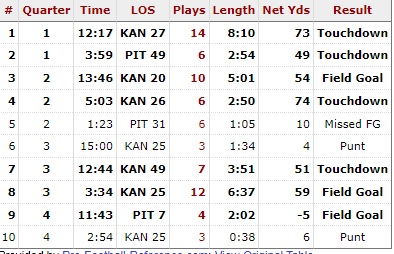 The Kansas City Chiefs scored 23 first half points. The Chiefs would have been perfect scoring on every possession in the first half but missed a field goal with 18 seconds left in the half. The Steelers defense did hold the Chiefs to a three and out to open the second half. But gave up a touchdown and two field goals on the next three. It’s hard to find bright spots in the defense when the opponent scores seven times in ten possessions.

T.J. Watt playing hurt. Cam Heyward and Alex Highsmith both sacked the quarterback. But could not takeaway the ball. Minkah Fitzpatrick racking up the tackles. But is that a good thing? I’d rather see linebackers doing that. Robert Spillane did record 13 tackles. The Steelers did limit the Chiefs third down efficiency to 36.4% by stopping them seven of 11 times on third down. But overall, Pat Mahomes and the Chiefs offense just took what the Steelers defense gave them.

Chris Boswell kicked off three times. Elliot Fry already kicked off five times by the Boswell opened the second half with a touchback. He did kick a short one in the fourth quarter, but Mecole Hardman returned the ball 20 yards. Chief’s average starting position was their own 25-yard line.

Relief kicker Elliott Fry kicked off eight times. Five kickoffs reached the end zone for touchbacks. One just inside the cone to miss going out of bounds by less than a yard. The Chiefs caught offsides on another giving the Steelers a start at the 30. Ray-Ray McCloud returned three. His best return 29 yards to the 30. His last only 13 yards to the 15. The Steelers average starting position was just shy of the 25.

I give the Chiefs a slight edge due to two kickoffs giving the Steelers starting position inside the 25-yard line.

*Penalty for offside on a touchback giving Steelers ball at 30

Corliss Waitman replaced Pressley Harvin III whose father passed away Christmas morning. Waitman punted twice. Both punts early in first half. The first went 58 yards to the nine-yard line. But Mecole Hardman returned the ball 18 yards before Derek Tuszka forced him out of bounds. The second went 63 yards for a touch back. Nice punts on a windy day.

Johnny Townsend punted twice. The first at the start of the second half went 41 yards and out of bounds at the Steelers 30. The second late in the game went 50 yards with Ray-Ray returning the ball 20 yards.

We should find out early this week what the Steelers plan to do. Harvin has been disappointing in his rookie year as a punter but his holding exceptionally good. Waitman boomed the ball but not sure how much the wind played a factor. Townsend also a replacement punter after punting a few games for the Titans earlier this season. Edge to Pittsburgh since Waitman’s boots gave Chiefs starting position further downfield than Townsend’s.

Chris Boswell missed a 39-yard attempt in the first half. Boswell kicked a 44-yard field goal when the Steelers already down 30-0.

Elliott Fry kicked well in relief of Harrison Butker. He missed one of four points after touchdown attempts. Plus hit three of four field goals in windy conditions.

Thank you, Ross McCorkle, for keeping us up to date on the game’s first half Live Update and Discussion Thread. Steelers Depot respondents contributed 1476 first half comments.

Daryl Bennett sounded optimism with the “best” comment of the first half. “KC missed XP. The spark we were looking for.” The Steelers only down 23-0 at that point.

Reader783 saw talent but concerned what coaching may wrought. “Waitman is better than Harvin right now, but just give Danny Smith a few weeks to poison his mind with BS about coffin corners and hang time and he’ll be hitting 38 yarders in no time.”

Folks not happy with play calling. The failed fourth and one play caught particular attention: “How in the hell are these guys coaches in the NFL!!! A f***ing sweep are you serious I can’t believe that was your 4th down play when you needed 1 yard!!!!” said Afrazier9. The Bus36 added, “I’m sorry. A fing sweep on 4th?” And Jay Clam concluded, “LOL that is the season in a microcosm.”

Meanwhile, Kansas City makes it look easy against the Steelers defense. Zhan 使美国再次伟大   got a lot of laughs from his quoting Steelers Nation Radio announcer Bill Hillgrove. “Hillgrove on the radio: ‘He winds his watch; he shines his shoes… touchdown!’ LOL!”

CraigM says “What’s the odds Tomlin changes his outfit to a different color, so it looks like he made some adjustment at halftime?” But Reader783 wants bigger change. “The Steelers have gotten flat out RUN OUT OF THE BUILDING in 4 games this December and some folks will STILL never ever think to look at the HEAD COACH of the football team for blame. It’s never ever his fault.”

Steelers Depot respondents delivered 1208 comments during the second half live discussion despite being down 23-0 at the half.

Joshwa frustrated with Najee Harris running sideways. “Why does Harris constantly try to get the edge? Get up field my dude.” But is that Najee avoiding contact or executing the play call?

Chris92021 looking for answers for kicking three points when down 30-0. “I wonder what Coach Euphemism is gonna say when asked about that field goal. The mental gymnastics is gonna be so good that Simone Biles will be proud lol.”

Sunny Sands has a cloudy outlook on the team. “My faith in the team’s organization and leadership has been shattered by their failure to build a minimally functional offensive line during the offseason.”

MB described it more succinctly, “This team is garbage” While I allowed the Steelers performance to disrupt my personal improvement plans, “Picked the wrong day to quit huffing glue.” RJMcReady noted, “You’ve had to say that too many times this season.”

The Bornloser admires the players going down swinging. “Snell just turned up field and smacked that defender, chief looked shocked. Forget celebrating and taunting THAT is how you show attitude when you are down!”

The Steelers already cut ties with offensive line coach Adrian Klemm. I’ve concluded that Matt Canada should be next. My view is that the offense is not much different than last year. But the offensive line has taken a step backward talentwise.

Likewise, player wise, it’s time for Kendrick Green to heal his calf and let J.C. Hassenauer man the center position. Wait for training camp to reset his career progression because right now he is in regression.

I do not know how the Steelers recover from such a humiliating loss. Maybe let Ben call his own plays. On defense, just must grit the teeth and keep grinding. Robert Spillane performed adequately as a replacement for Devin Bush. T.J. Watt playing in obvious pain. How much can he recover in one week’s time.

The Steelers play two more games. I want to enjoy what could be Ben Roethlisberger’s final home game at Heinz Field Monday night against the Cleveland Browns. I just hope he throws a show for the fans.

I always like to offer a music selection. Earlier this season, the Steelers’ said time was on our side while the young offensive line jelled. Here we are with two games to go, and playoff hopes still a possibility. Is it really, is time on our side? I’ve aged like Ed Sullivan this season. Here is Time is on My Side by the Rolling Stones.