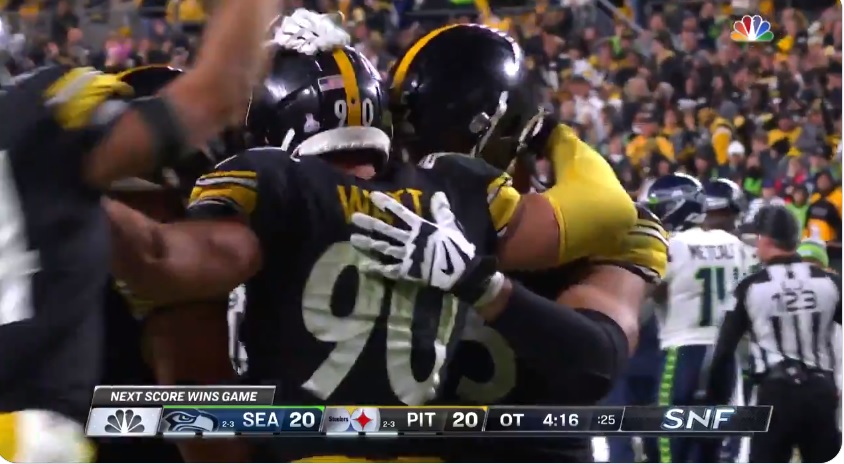 As the 2021 season winds down, awards season starts to heat up across the NFL, from the tightly-contested MVP race, to discussions surrounding the league’s First and Second Team All-Pro honors.

The All-Pro honors will be the largest debate coming out of the regular season as many players are deserving for just a limited number of spots, but fortunately for a pair of Pittsburgh Steelers,  they land comfortably inside the First and Second Team All-Pro picks by ESPN’s Bill Barnwell, who took a crack at naming his own set of All-Pro teams Thursday (subscription required).

According to Barnwell, Watt was an absolute lock for one of the two first-team edge positions with Garrett — a man he is battling against to claim the 2021 NFL’s Defensive Player of the Year Award.

“Watt has missed two games and been a part-time player in four others this season, and while that should matter when you’re being compared with guys who haven’t missed time, he has been productive enough on limited snaps to win those battles anyway,” Barnwell writes. “Watt’s 17.5 sacks and 31 quarterback knockdowns lead all players. He has also thrown in four forced fumbles, three fumble recoveries, four pass deflections and five tackles for loss against the run for good measure.”

While it is fair to question Watt’s case for DPOY due to some of the time missed on the field, questioning his fit for First Team All-Pro due to it feels pretty silly. He’s missed just two games, is on pace to set the NFL’s all-time single-season sack record, and has been a game-changer in the biggest of situations week after week for the Steelers, willing Pittsburgh to at least a pair of wins down the stretch thanks to pivotal turnovers.

It’s remarkable that he leads the league in sacks and quarterback knockdowns while playing two less games than another other pass rusher in the same class as him.

As for Boswell, it shouldn’t be much of a surprise that he’s in the All-Pro discussion. Aside from a rough 2018 season, Boswell has been every bit as good as Baltimore’s Justin Tucker, giving the AFC North two of the very best kickers in football, which is quite remarkable to read considering the conditions in which the two play in year after year in divisional play.

Though Tucker is the clear frontrunner for First Team All-Pro this season, Boswell slots in as the second-teamer for Barnwell, edging out Los Angeles Rams’ kicker Matt Gay.

“I give Boswell, third in value on scoring plays, the nod over Gay by virtue of playing in a more difficult kicking environment,” Barnwell writes.

That’s certainly an interesting reasoning behind why Barnwell takes Boswell over Gay for second team, but to each his own, I guess.

Boswell is attempting longer kickers in bigger situations, while the Rams are more aggressive offensively and tend to go for things, rather than relying on Gay, who has been automatic, from range.