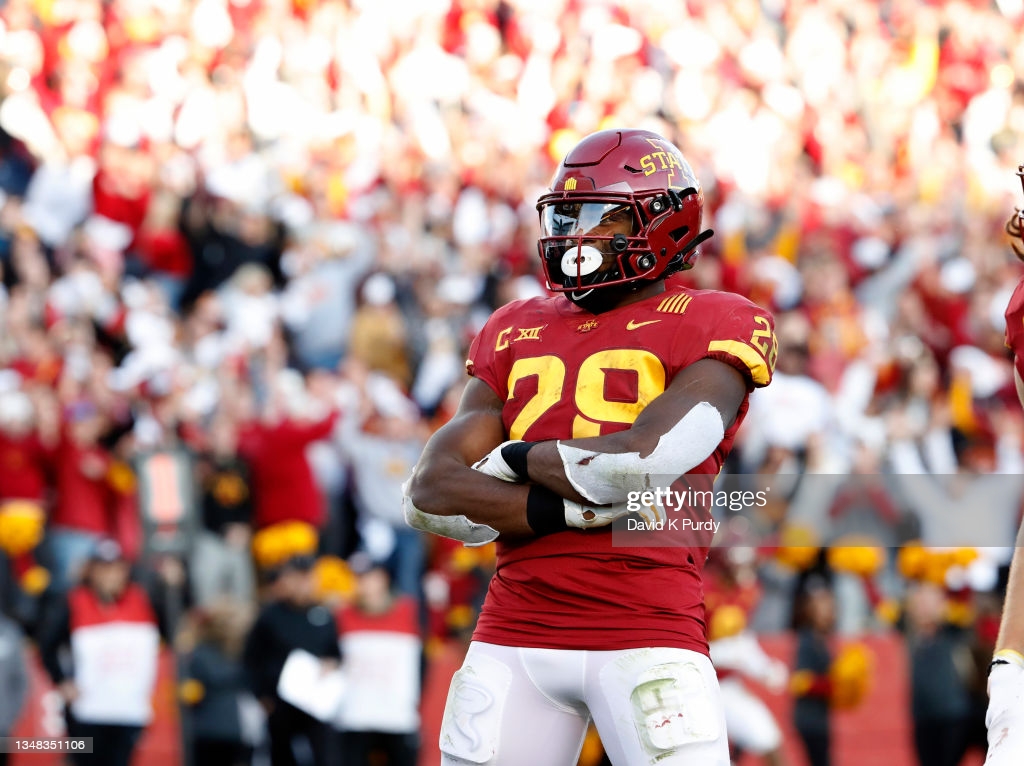 The Hokies will face the Terrapins in Yankee Stadium Wednesday afternoon to kick off the midweek bowl game slate. For the Hokies, their highest profile draft prospect OG #54 Lectius Smith has already opted out of the bowl game as a likely Late Day Two/ Early Day Three selection this spring, getting a chance to play one more time in front of scouts at the Senior Bowl. Fellow teammates CB #2 Jermaine Waller and EDGE #11 Amare Barno have also decided to opt out of the Pinstripe Bowl, electing to play is safe as likely late-round draft prospects.

For the Terps, the most likely draft prospect WR #7 Dontay Demus Jr. injured his leg back in October and has announced that he will return to Maryland to rehab and regain his draft stock for 2023.

The Tigers square off against the Iowa State Cyclones later in the afternoon down south in Orlando, Florida. For Clemson, this marks the sixth-straight season where the Tigers have had no bowl game opt outs, speaking highly of the culture built there by HC Dabo Swinney.

For this reason, we get the opportunity to watch CB #1 Andrew Booth Jr. The 6’0, 200lb junior has good size paired with impressive speed and quickness to round out the full package scouts are looking for in an NFL defensive back. A willing tackler, Booth excels in man coverage situations, having the length and athleticism to challenge WRs at the catch point and possesses the ball skills to take the ball away. A favorite to be a first round selection, look for Booth to solidify his Day One draft status in this one.

Clemson CB Andrew Booth Jr. (5116, 195, Jr.) is a super twitchy and quick footed corner. Outstanding body control, and special with attacking the ball out of the air. Should be atop every list as a prime 2021 breakout candidate.https://t.co/zmSVeGB61j pic.twitter.com/WPJmOtbu81

Another defender the Tigers may send to the league is DL #13 Tyler Davis. The 6’2, 300lb junior was a highly-touted recruit coming out of high school but has struggled with various injuries the last two seasons. However, when he’s on the field, Davis flashes on tape with his athleticism and pursuit for a man of his size. He moves fluidly as a pass rusher and has the strength and anchor to hold his own in stopping the run. His medicals will need to be cleared by NFL doctors, but Davis has been productive in his limited time at Clemson and could be a great value pick in the middle rounds on the 2022 NFL Draft.

Rising Soph Tyler Davis (13) is going to be the next great Clemson DL prospect in due time pic.twitter.com/FN78MEWfq1

WR #8 Justyn Ross will miss the bowl game due to injury, and other prospects that may have a chance to late in the draft or undrafted for Clemson to watch for include EDGE #3 Xavier Thomas, LB #47 James Skalski, and S #24 Nolan Turner.

For the Cyclones, their biggest star, RB #28 Breece Hall, has already opted out of the bowl game to go pro and start preparing for the NFL. Hall amassed a spectacular career at Iowa State, and figures to be the favorite to be RB1 in this draft class when it’s all said-and-done as a prototypical feature back at the next level.

Breece Hall uses his vision and burst to break off a monster run, finishing with physicality!

The other notable weapon for the Cyclone offense, TE #88 Charlie Kolar, intends to play in the bowl game at the moment. The 6’6, 260lb senior has enjoyed a stellar career in Ames, improving each season as a blocker while dominating in the receiving game both as a traditional TE as well as split out in the slot or out on the perimeter. Kolar has amassed 2,148 yards and 22 TDs in four seasons, being a reliable target on possession down to move the chains as well as a viable steam stretcher up the middle that excels in contested catch situations. Kolar doesn’t possess elite speed or quickness but will be a reliable target in the league that could develop into a red zone specialist.

Other draftable players for Iowa State to watch out for include LB #23 Mike Rose, S #12 Greg Eisworth, and QB #15 Brock Purdy.

The Ducks take on the Sooners in a battle of well-respected football programs in the college game Wednesday night in San Antonio, Texas. For the Ducks, it was a forgone conclusion that EDGE #5 Kayvon Thibodeaux would skip the bowl game as potentially the #1 Overall Pick in the 2022 NFL Draft. Along with Thibodeaux, CB #2 Mykael Wright, and WR #2 Devon Williams have all opted out of playing in the bowl game.

Currently, we do expect S #23 Verone McKinley III to play in the bowl game for the Ducks. The 5’11, 194lb redshirt sophomore hasn’t decided whether or not to return with a new coaching regime in Eugene for next season, but should he declare, McKinley III figures to be a sought-after defensive back in the draft. A natural ball magnet, McKinley III has the ball skills and instincts to be in the right place at the right time in coverage, having picked off 11 passes in his time in college, including six this season. A natural fit as a single high/split zone safety, McKinley could provide an NFL defense with an opportunistic playmaker who has a knack for taking the football away.

Verone McKinley III INT was a chess match play. Jayden de Laura moved the safety with his eyes on earlier 70-yard throw. Here McKinley moves inside pre-snap and de Laura aims wide to the field with too much air underneath and not far enough to sideline. pic.twitter.com/67jEkBV3zf

RB #7 CJ Verdell will also miss the bowl game due to an injury suffered back in October. It isn’t clear if he will declare or go back for another season, but should he be healthy, Verdell figures to be a late-round draft prospect this spring.

For the Sooners, they too are dealing with a bevy of notable opt outs, including stud pass rusher EDGE #11 Nik Bonitto, DL #95 Isaiah Thomas, DL #8 Perrion Winfrey, and LB #24 Brian Asamoah. One name for Oklahoma who has committed to play in the game is TE/FB #27 Jeremiah Hall. The senior is undersized for the TE position, standing 6’2, 248lb, and will likely have to make the transition to FB/H-Back at the next level. However, Hall is a great weapon in the passing game in the short and intermediate quadrants of the field as well as being a willing and capable blocker. Hall figures to be a late-round pick who can contribute on special teams and provide support in the run game.

Oklahoma will also have OG #54 Maquis Hayes also playing in this game along with RBs #0 Eric Gray and #26 Kennedy Brooks who haven’t yet decided on their NFL futures. Ss #32 Delarrin Turner-Yell and #10 Pat Fields also look to play in this game as likely late-round draft selections if not UDFAs.