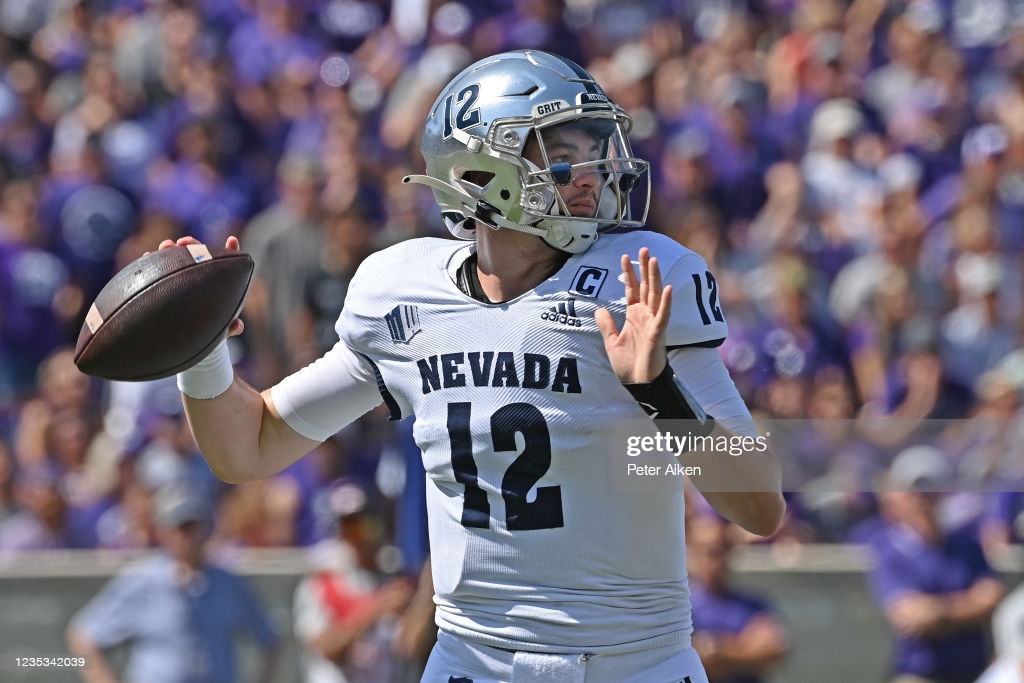 The Broncos square off against the Wolfpack at Ford Field in Detroit, Michigan Monday morning. For Western Michigan, the name to watch is WR #24 Skyy Moore. The 5’10″, 195 lb. redshirt sophomore could easily decide to come back for his next two years of eligibility, but Moore has enjoyed a stellar campaign for the Broncos, catching 91 passes for 1,256 yards (13.8 YPR) and 10 TDs. Moore is coming off two impressive back-to-back performances against Eastern Michigan and Northern Illinois, having a field day against the Huskies to the tune of 206 yard and four scores on 12 receptions. Likely a Day 3 selection, Moore can win multiple ways down the field and over the middle in the passing game.

For the Wolfpack, there are plenty more of draftable options that the members of Steelers Depot are aware of given Dave Bryan’s fandom with the team. The priority guy is QB #12 Carson Strong. The 6’4″, 215 lb. junior has put together an impressive 2021 season, completing 70% of his passes for 4,186 yards and 36 TDs compared to only eight INTs. Strong has the arm talent to air it out down the field and can make nearly any throw in the playbook in all quadrants of the field. Still, his turnover-worthy plays are cause for concern at times and his lack of mobility limits his upside as a pocket passer at the next level. Sadly, both Strong and TE #19 Cole Turner have opted out.

One player that is currently on the fence in terms of playing Monday for Nevada is WR #7 Romeo Doubs. It has been reported that he may opt out right before the game, but at this point he is on the team ready to go. The 6’2″, 200 lb. senior has been Strong’s top target the last two seasons, cracking the 1,000-yard mark in 2020 and 2021 and scoring 20 TDs in that time frame. Doubs is a vertical threat that challenges opposing defenses with his ability to win down the field. A likely Day 2 selection, Doubs is dangerous after the catch and can stack defenders on vertical concepts as a deep threat.

While not a burner, Doubs has plenty of speed to make defenses play him honest and open up the rest of the passing game for options underneath. He also has proven to be a viable intermediate target, making him a potential value selection in the middle rounds of the draft should a team not want to pay a premium for one of the top options at the position.

The Pirates take on the Eagles Monday afternoon in Annapolis. For Eastern Carolina, you should be turning your attention to S #9 D.J. Ford and #0 Jireh Wilson. Ford is the HWS specimen you love to see at defensive back, standing 6’3″, 215 lb. While the frame is there, the ball production isn’t having one career INT in his college career. He does have a couple fumble recoveries and a sack in his career, but likely will have to fight for a special teams role to get a spot on an NFL roster. Wilson is only a redshirt sophomore and may likely come back, but he too has great size (6’3″, 211 lb.) and has been productive in coverage as well as a blitzer for ECU.

For the Eagles, the name to watch is OL #77 Zion Johnson. The 6’3″, 316 lb. senior was a First Team All-ACC selection this season and has been a dominant run blocker for Boston College’s run heavy offensive attack, logging starts at both LG at LT the last three seasons. Johnson plays with great leverage given his size and has the strength to move defenders off the point of attack. He also is a capable pass protector, being a decent athlete that stays in front of his man. Johnson will look to boost his stock in this game as well as at the Senior Bowl to cement his status as one of the first iOL drafted this spring.

In honor of the #ACCKickoff, one player worth keeping tabs on is Zion Johnson (Boston College LT 77). Before arriving to BC, he had played two seasons at Davidson. Since then, he's played in 24 games (11 starts at LT and 7 starts at LG). pic.twitter.com/cT3hloNSXY

Johnson’s running mate along the OL will also be a key player to watch in this game: OL #72 Alec Lindstrom. The 6’3″, 298 lb. senior is a three-year starter at center with some experience at guard during his redshirt freshman campaign. The younger brother of former first-round pick and current Atlanta Falcons OL Chris Lindstrom, Alec is a great run blocker that constantly is looking for work in pass protection, having his head on a swivel. Adding extra mass and strength would benefit his transition to the league, but Lindstrom plays with good pad level as a blocker, looking to finish his opponents to the turf. He projects as a Day 2 selection that can elevate his draft stock with strong testing this spring.

Boston College C Alec Lindstrom (Chris Lindstrom’s little brother) has some nasty to him. Flattens the linebacker and gives him a little extra. pic.twitter.com/E51oAleljX