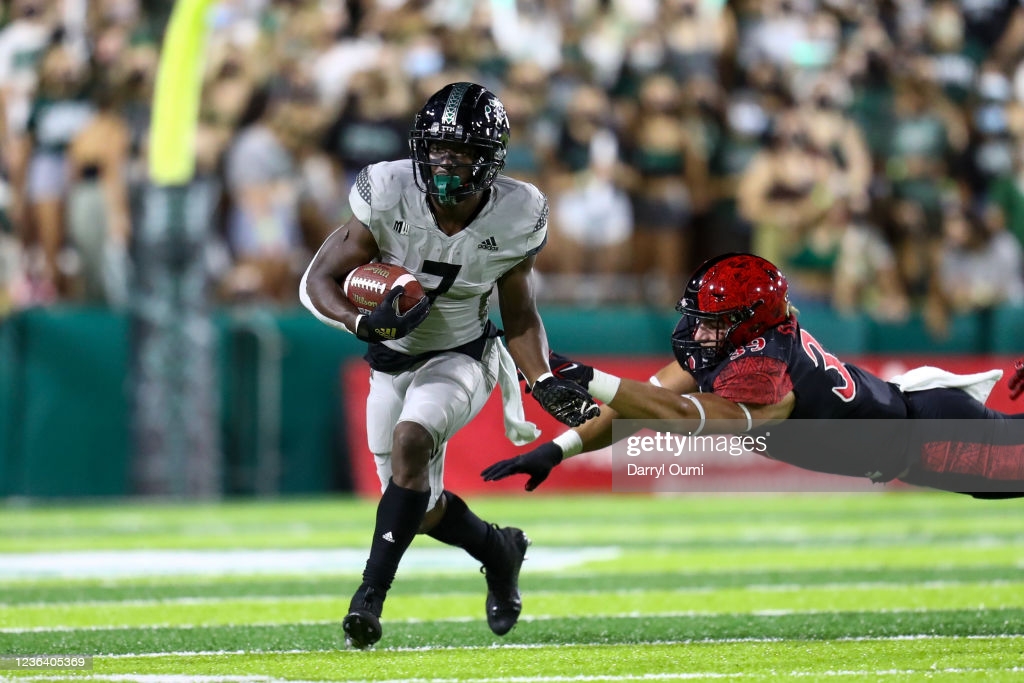 The Tigers travel across the Pacific to take on the Rainbow Warriors Friday night on Christmas Eve. For Memphis, make sure to keep your eyes on DB #1 Quindell Johnson. The 6’1″, 195 lb. junior patrols the back end for the Memphis defense, having the length and range to make plays on the football in the air. In three seasons, Johnson has 20 PBUs and six INTs while also being a capable run defender, having gone over the century mark in stops (104) this season. His versatility and size make him an intriguing Day 3 prospect should he declare early, having the flexibility to play deep or in the box while also contributing on special teams right away.

The player to watch for Memphis, WR #4 Calvin Austin III opted out of the bowl game to begin his draft prep. However, as a Senior Bowl invite, he should be a name to keep tabs on during that week of practices in Mobile. Also watch for TE/FB #5 Sean Dykes who is undersized for TE standards in the NFL (6’2″, 224 lb.), but projects to fit that FB/H-Back role as a skilled receiver (seven TDs in back-to-back seasons) that can be a chess piece for creative OCs at the next level.

For the Rainbow Warriors, be sure to direct your attention to WR/RB #7 Calvin Turner. The 5’11″, 195 lb. senior has been quite the offensive weapon for Hawaii during his college career, being utilized both as a running back and wide receiver as the offense schemes to get the ball into his hands. Turner rushed for 1,437 yards in 2018 and 1,355 yards in 2019, but saw his rushing totals drop to 316 yards this season as he was more featured as a receiver, catching 73 passes for 876 yards in 2021. Turner is a big play waiting to happen, having scored 45 TDs in his college career. The East-West Shrine game invitee can be special in space and has a chance to impress scouts tonight.

#Hawaii Swiss Army knife Calvin Turner did it all for the Rainbows, from wildcat QB, to RB, slot receiver and returner. An explosive and dynamic talent player who should be used all over the field in the NFL.

Awesome get for the Shrine Bowl!

On the defensive side of the football, CB #18 Cortez Davis is the name to watch for Hawaii in this game. The 5’11″, 180 lb. senior doesn’t have great size and can stand to get stronger. But Davis holds his own in coverage, playing well in the MWC against some notable WRs. He has racked up 18 PBUs this season along with an INT, having a knack for playing the football in the air to force the incomplete pass. A likely Day 3 selection or UDFA, Davis can do a lot for his draft stock with a strong performance Christmas Eve to catch the eyes of scouts and get his name generating buzz during the pre-draft process.

What a play by Cortez Davis to get his first INT of the season! 👀 #WinEveryDay pic.twitter.com/IXdYf3NPTa