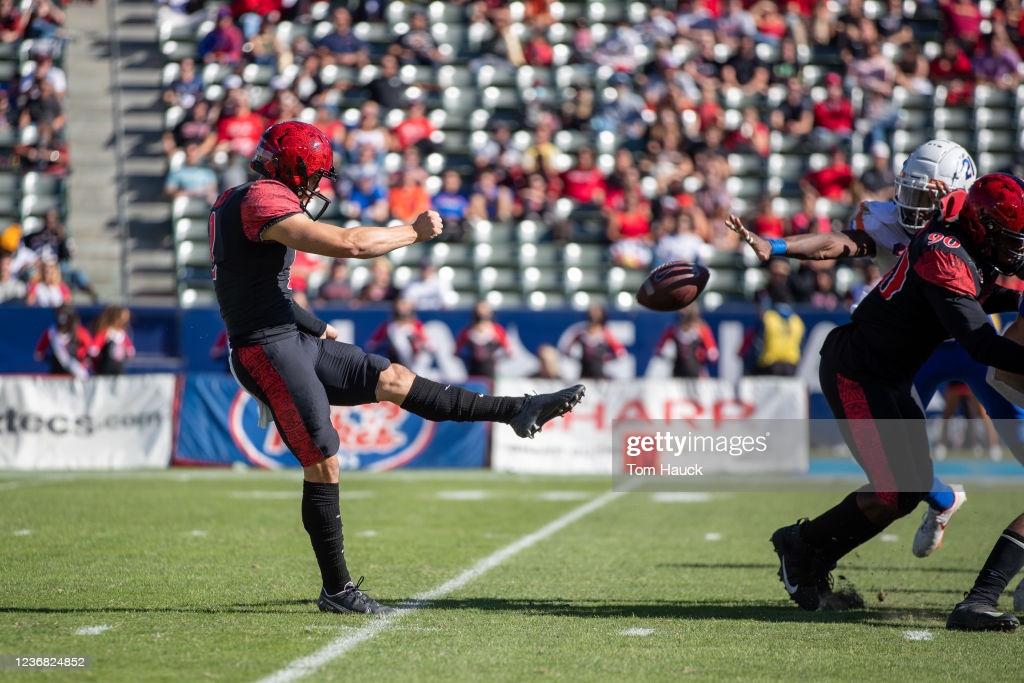 The Kent State Golden Flashes take on the Wyoming Cowboys on the blue turf in Boise, Idaho Tuesday afternoon. For Kent State, the name to watch is QB #7 Dustin Crum. The 6’3″, 207 lb. senior has had a successful career at the helm of the Golden Flashes offense, throwing for 7,133 yards with a career completion percentage of 66.3% and a TD-to-INT ratio of 51:12. Crum also brings a fair amount of mobility to the QB position, having rushed for 633 yards in 2021 and over 2,000 during his college career. Likely a late Day 3 prospect or UFDA, Crum will have to show scouts he can be a capable backup at the next level to likely receive draft consideration this spring.

Dustin Crum with the impressive touchdown run for @KentStFootball! 😤 pic.twitter.com/C2kNmx9yXb

For Wyoming, the main attraction is LB #48 Chad Muma. The 6’3″, 242 lb. junior has good size and length for the off-ball linebacker spot paired with the instincts and athleticism to be a tackling machine. Senior Bowl director Jim Nagy and Bruce Feldman for The Athletic have touted Muma as the next great Cowboys linebacker destined for the league following in the footsteps of current Bengals LB Logan Wilson, going so far as to say that Muma will be an even better pro player. Muma shows great pursuit as a sideline-to-sideline linebacker while also having the skillset to run with backs at TEs in coverage. Look for Muma’s name to gain more seam throughout the spring, and his testing to vault him up boards.

He also has 2 INTs returned for TDs and a blocked FG this season. Over 400 special teams snaps in career. Big, tough, athletic & can run! @seniorbowl 👀 pic.twitter.com/Iw0ZFHzwto

Other names to watch in this game include Wyoming RB #6 Xazavian Valladay and Kent State WR #80 Keshun Abram both playmakers are currently on the fringe of being drafted or being picked up after the drafts as UDFAs, but a good showing in this game could get them recognized by scouts, promoting more eyes to be directed their way when the Pro Day circuit kicks off this spring.

When the Aztecs take on the Roadrunners Tuesday night, the main attraction from a scouting perspective will be SDSU DL #99 Cameron Thomas. The 6’5″, 270 lb. junior primarily plays with his hand in the dirt as a typical 4-3 DE, but has the athleticism and burst to potentially play on his feet at the next level. Draft enthusiasts consider Thomas an extremely underrated prospect in this draft class, having posted 10.5 sacks and 20.5 TFLs this season for a stout Aztec defense with respectable sack production two years prior to his breakout 2021 campaign. Todd McShay and Mel Kiper Jr. both rank Thomas inside their top five DE prospects, and a strong performance on national television could boost his draft stock going into the spring.

Once again #SDSU DL Cameron Thomas wrecking games with his athleticism and hand usage tonight, up to 5 tackles, 2 TFLs and 1 sack in the first half against San Jose State.

Is quietly becoming one of the most dynamic defensive lineman in the country. pic.twitter.com/DLG8c04Zdv

To appease Alex Kozora and his affinity with punters, P #2 Matt Araiza is another name for the Aztecs looking to transition from college to the pros this spring. Araiza has been one of the best punters in the country this season, averaging 51.3 yards per punt for his career at San Diego State, leading to him winning the Ray Guy Award this season. The 6’2″, 200 lb. junior has also played a fair amount as a place kicker, having a career long of 53 yards under his belt. For the man nicknamed “Punt God” in college football, Araiza has the skillset to provide a top-tier option at flipping field position, and a suitable backup kicker should an injury occur to the starter.

Bro Matt Araiza punted this from the 12 to the opposite end zone what in the WORLD.pic.twitter.com/H3T1xbjZMT

For the Roadrunners, DB #3 Tariq Woolen is a name to watch. The Senior Bowl invitee has fantastic size and length, standing 6’4″, 205 lb. with the long arms and wingspan to contest passes over the middle and effectively battle bigger receivers on contested catches. His ball production is fairly limited (two INTs in his career), but he is aggressive at challenging receivers at the catch point and coming downhill in run defense. His fluidity against smaller receivers may make him a candidate to move to safety, but Woolen has impressive athleticism and the rare measurables to make him an intriguing Day 3 prospect this spring.

Another name to watch for the Roadrunners is OT #74 Spencer Buford. The 6’5″, 295 lb. senior needs to add a little more size and strength to his frame to hold up against powerful edge defenders at the next level, but he is an aggressive run blocker who takes pride in putting his man on his back. Pass protection and overall technique are things that Buford will have to improve to be more than a backup-caliber player at the next level, but he is a potential target for OL-needy teams to target and groom this spring.

Which of the names listed above will you be specifically watching this weekend? Do you think any of the prospects would be a good fit for the Pittsburgh Steelers? Please leave your thoughts in the comments section below, and thanks again for reading!