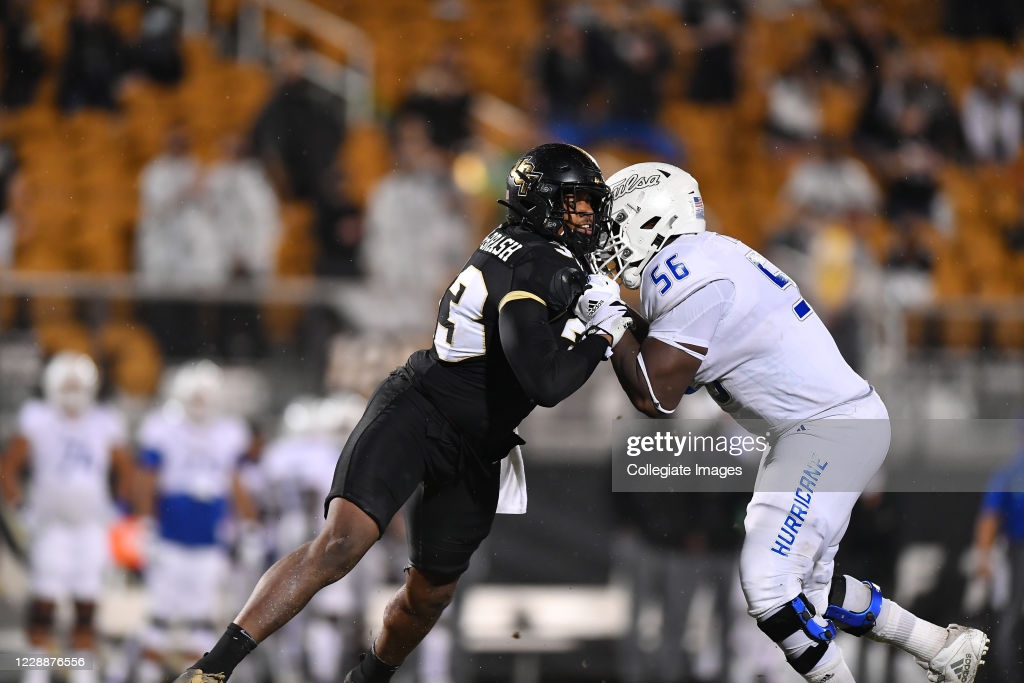 When watching the Golden Hurricanes square off against the Monarchs Monday afternoon, all eyes should be in the trenches for Tulsa. The headliner along the offensive line is OT #56 Tyler Smith. The 6’6″, 332 lb. redshirt sophomore was a Freshman All-American selection last season and has made huge strides since then, garnering the interest of scouts due to his massive frame and physical play style. Smith is highly regarded amongst the top OTs at the FBS level based on analytics via Pro Football Focus, and his improved play in pass protection paired with the fact that he is still young and developing make him an enticing Day 3 selection.

Watching some Group of 5 offensive tackles today. Tulsa's Tyler Smith (LT#56) with an awesome rep here in pass pro. Suffocates the rush with strong hands, and throws his man into the dirt. Great knee bend, too. pic.twitter.com/wNIACusD5l

On the opposite side of the line for Tulsa aligns another draft hopeful: OL #71 Chris Paul. The 6’4″, 324 lb. redshirt senior prospect is a Senior Bowl invitee and has experience playing both inside and outside during his time in college, racking up starts at LG and RG before kicking out to RT for the start of the 2020 campaign. A physical run blocker, Paul has instances where he shows quickness in his vertical set in pass protection, but needs to work on his consistency against pass rushers to be considered more than a high-level backup. His strength and power make him a player that can play both at guard and at tackle at the next level, providing that versatility teams are looking for.

For Old Dominion, the guys to be looking at are TE #80 Zack Kuntz and LB #3 Jordan Young. Young is a 6’3″, 230 lb. senior that had good production during his time with the Monarchs, racking up 325 total stops (137 solo), eight PBUs, two sacks, two INTs, and a forced fumble. A tackling machine, Young can make plays against the run, but hasn’t made an impact in the splash play department in four seasons, raising questions whether he can somehow get that going in the pros. Look for Young to likely be signed after the draft and be a guy that cuts his teeth on special teams first to make a roster.

Kuntz has fantastic length, standing 6’8″, but only weighs 245 lbs., needing to add more mass to hold his own given his lanky frame. Given this is Kuntz’s first actual year of production, I expect him to return to Old Dominion to develop physically and put more tape out there for 2023.