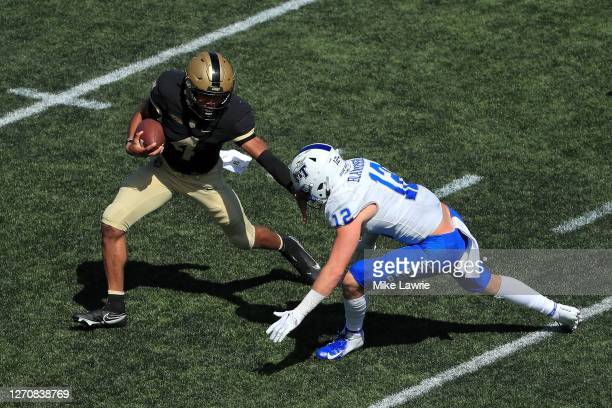 The Bahamas Bowl kicks off College Football Bowl Season where sports betting will be at an all-time high and college scouts will have their last chance to see several draft prospects in pads before the 2022 NFL Draft in April. For several prospects, however, they will get one more opportunity to play live contact football in one of the designated college all-star games that occur after the college football season has concluded. Probably the most high-profile of these showcases is the Reece’s Senior Bowl in Mobile, Alabama. Several of the Steelers Depot crew, including myself, will have the opportunity to travel South to evaluate many of these draft-hopefuls as they attempt to make a good impression on scouts to boost their draft stock.

One player in this games that has already accepting an invite to Mobile is Toledo S #1 Tycen Anderson. The defensive back has the size and length you love to see at the position, standing 6’2, 210lb and plays to that size in the box. Fellow Steelers Depot contributor Devin Jackson highlighted Anderson earlier this season when he accepted his invite, praising his length and extensive background on special teams.

Over 800 special team snaps in his career, has some of the longest arms for a secondary player, #Toledo DB Tycen Anderson has a chance to be an immediate contributor at the NFL level.

Anderson has the length to get his hands up into passing lanes and combines his frame with athleticism to show good range in pursuit of the ball whether in run defense or in pass coverage.

#MACtion starts tonight, and one #NFLDraft prospect to get to know this MACtion November is @ToledoFB SAF Tycen Anderson (@MrToledo01).

While a natural fit as a box safety, Anderson has some versatility, having experience playing deep split zone as well as in the slot as the nickel/dime defender. The physical tools are there, but the production has been modest as a redshirt senior, having two sacks, two forced fumbles, and two INTs in five seasons of play. Still, the physical tools are there for Anderson to be drafted as a key special teams’ contributor as he continues to develop to earn a role as a rotational defensive back.

One of the most interesting prospects in the MAC has to be Toledo DB Tycen Anderson. Lines up over the slot here and basically runs the route for him. Long and smooth. pic.twitter.com/s5EC3UEiUy

For the Rockets, RB #22 Bryant Koback is the name to watch on the offensive side of the football. The redshirt junior has average side (6’0, 210lb) but has been productive for the Toledo offense, tallying 1,274 yards on only 190 carries (6.7 YPC) and 15 TDs while chipping in 29 receptions for 333 yards (11.5 YPR) and three scores. He likely won’t hear his name called until late Day Three if he doesn’t go undrafted, but Koback has the skillset to contribute in all facets of the game as a runner, receiver, and pass protector with the vision to be a capable backup in the league.

For Middle Tennessee, the main prospect to watch is S #12 Reed Blankenship. The 6’1, 204lb senior has had quite the productive career for the Blue Raiders, totaling 415 total stops (261 solo), 19 PBUs, three sacks, three forced fumbles, and nine interceptions including this 100-yard pick six.

Blankenship was named to “Feldman’s Freaks List” for The Athletic back in 2020, having impressive speed and quickness to roam the secondary and make plays on the football. He has a knack for getting his hands on plenty of passes and is an under-the-radar prospect draft knits need to keep an eye on through the spring as a great fit at deep zone/single high safety at the next level. Blankenship has accepted an invite to the East-West Shrine Bowl which will be in the backyard of the great Dave Bryan for several members of the Steelers Depot crew to watch in-person.

He'll be a 3-year captain and started almost every game he's been healthy at #MTSU. Explosive, fluid athlete at safety. pic.twitter.com/vvvYIgcTWV

When the Chanticleers take on the Huskies down in Orlando, Florida, fans and scouts alike will be wise to direct their eyes to the Coastal Carolina side of the field from a draft prospect perspective. Coastal is coming off another double-digit win season and has a few star players that will be taking their talents to the league and begin playing on Sundays this next fall. One player that sticks out on tape is EDGE #94 Jeffery Gunter. The 6’4, 260lb senior is a prototypical 3-4 OLB at the next level with the strength and explosiveness to cause problems for opposing offensive tackles coming off the edge. He has three-straight seasons with 5+ sacks and has nine forced fumbles to his credit in college.

2022 NFL Draft Prospect Jeffrey Gunter Coastal Carolina plays with an Edge look for him to make a name for himself!! @jgunter94 pic.twitter.com/WsIqNd7Iq2

Gunter is a plus-athlete as the position, quick on his feet and can be used on twists and stunts inside as well as win around the corner. He also does a good job getting his hands up in passing lanes knock down balls at the LOS. The running mate of current Eagles DE Tarron Jackson, Senior Bowl director Jim Nagy and his staff have graded Gunter in a similar range as Jackson coming out. A likely Day Three selection, Gunter can really help boost his stock with a strong performance in this one.

The other name for Coastal Carolina you should keep your eyes on is TE #4 Isaiah Likely. The 6’4, 240lb senior profiles more as a Y-receiver, doing most of his work as a pumped-up wide receiver in the passing game, working against linebackers and safeties in coverage. Likely is a mismatch nightmare in these situations, having the size, leaping ability, and athleticism to separate from coverage and climb the ladder to win contested jump balls in the red zone.

What was the likelihood of Isaiah Likely making this TD catch? #CFB pic.twitter.com/m3tGQlYcJG

While not the most established blocker, Likely will put his face in the fan and attempt to contribute in the run game. He will need to continue to develop physically, getting stronger to play as a traditional in-line tight end at the next level, but Likely’s calling card is his prowess as a receiver, having nearly 2,000 yards and 25 TDs in four seasons while averaging a healthy 15.5 YPR. He is a legit weapon down the seam, having the speed and explosiveness to break open for chunk plays. Likely will “likely” hear his name called in the middle rounds come April with the change to go early on Day Two.

For Northern Illinois, FB #25 Clint Ratkovich is the name to keep an eye on. The 6’1, 220lb senior is a Swiss Army Knife of sorts for the Husky offense, contributing both as a runner and a receiver while playing the role of running back, H-Back, fullback, and even wildcat QB. Ratkovich especially has enjoyed a great 2021 campaign, toting the rock 98 times for 448 yards (4.6 YPC) and 12 TDs while catching 13 passes for 113 yards and two scores.

If you’re looking for a fun player to watch in today’s early college games, check out NIU “superback” Clint Ratkovich.

Versatile weapon who could be a FB at the next level but has RB fluidity and TE hands. Some have compared him to Kyle Juszczyk. pic.twitter.com/wmsQupSIkn

As mentioned in the tweet above, Ratkovich’s diverse skillset has had him compared at times to do-it-all offensive weapon Kyle Juszczyk for the 49ers. Being nearly identical size to “Juice” (6’1, 235lb), Ratkovich could stand to add 10-15lb to better hold his own as a lead blocker at the next level, but he has been an effective run blocker when called upon and his versatile skill set as an offensive weapon make him a potential intriguing piece for creative offensive coordinators who still value the fullback position in the league. A Shrine Bowl invitee, Ratkovich will have a couple chances to impress scouts in the coming weeks.

Clint Ratkovich uses his running ability to take this one to the end zone for NIU.

Ratkovich accepted an invite to the Shrine Bowl, and will get a chance to showcase his skills there.