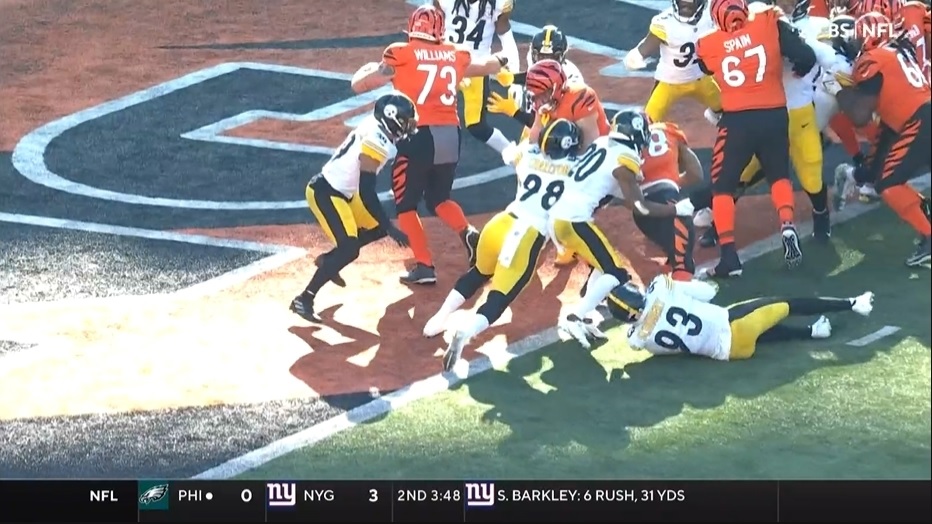 Just three days removed from Sunday’s debacle at Paul Brown Stadium in Cincinnati, the rewatch and charting doesn’t get any easier, especially when having to go back through the game and the tape repeatedly to watch the Pittsburgh Steelers get absolutely dismantled in all phases by the Cincinnati Bengals.

Top to bottom, it was a pathetic display of professional football from one of the proudest organizations in the NFL.

Arguably none bigger than in the tackling department, which is consistently a major flaw with this version of the Steelers under veteran head coach Mike Tomlin.

On Sunday, the Steelers turned in a lackluster performance in the tackling department, missing 13 total tackles as the Bengals’ offense did whatever it wanted to do against a Steelers’ defense that saw a couple of key guys in Minkah Fitzpatrick and T.J. Watt return. That didn’t help as Joe Burrow, Joe Mixon, and Tee Higgins lit up the Steelers to a tune of 34 offensive points, leading to the beatdown.

Let’s check out this week’s missed tackles report and move on to Baltimore.

Not too pretty with this one, right?

Once again, key defenders for the Steelers are missing tackles, and in big spots, resulting in a ton of successful plays for the opposition.

Will that change anytime soon? Maybe, considering the Steelers are going to be in pads this week and hitting, according to Tomlin. Some will say that should have happened already, but the league’s Collective Bargaining Agreement limits the number of padded practices allowed. Sounds like Tomlin is going to use up a bunch this week, and rightfully so.

Edmunds does a good job filling the run lane here, coming downhill to meet Joe Mixon head-on. What Edmunds doesn’t do is bring his feet and wrap up, allowing Mixon to power through the clash to gain three more yards, setting up a much more manageable second and short.

For a guy who has been so good in the box this season, Edmunds had a rough first half in the box as the Bengals ran all over the Steelers. He tends to not bring his feet in instances like this, which results in the miss.

Early in the second half, special teams issues popped up again for the Steelers in the tackling department.

Punting the football away after a sack of Ben Roethlisberger to give the Steelers a three-and-out after a mediocre first half, Arthur Maulet and Derrek Tuszka came up small on the return by Cincinnati’s Darius Phillips, allowing the returner to pick up a gain of 17 yards.

Maulet does a nice job working off of a double team to get a crack at Phillips, but he’s the first miss. From there, Tuszka is right there, but he whiffs head-up and inexplicably looks around for a call for a block in the back (it wasn’t) as Phillips goes sprinting past him.

When you’re getting crushed in the trenches all day long, you can’t add to the mess by giving up good field position on special teams due to missed tackles like Maulet and Tuszka recorded.

Finally, the last miss I wanted to look at was the miss on third and nine in the fourth quarter by one T.J. Watt.

The Bengals have their backups in the game and the Steelers still have the first-team defense out on the field.

Cincinnati calls a draw play for rookie running back Chris Evans in an effort to burn time and create some room for a punt. Watt plays this very well, working inside out, getting free with a club over to get a crack at Evans. He whiffs badly though, allowing the rookie running back to turn the corner and move the chains up 41-3.

Watt’s miss just about summed up the Steelers’ day defensively.

Offensively, the Steelers were rather putrid as well. However, they did force 10 missed tackles by the Bengals. However, that means they lost the battle with a mark of -3.

Even in a blowout, it’s great to see the Steelers’ two key rookies in Najee Harris and Pat Freiermuth playing hard to the bitter end.

Harris and Freiermuth recorded five of the 10 forced missed tackles on the day, which is quite impressive.

Freiermuth was up first, forcing a key miss on Cincinnati safety Von Bell in the open field on a third-down checkdown from Ben Roethlisberger, allowing the Steelers to move the chains.

There’s nothing fancy about it from Freiermuth. He sees Bell pursuing, slams on the breaks to let the veteran safety slide by, slips inside and moves the chains. He’s a heady player, definitely looks a lot like Heath Miller here.

As for Harris, he’s like a Maserati in a trailer park right now. Fortunately for the Steelers he keeps making plays.

There’s no way he should take this checkdown 12 yards, but he makes two defenders miss right away and has the burst to get upfield and lower his shoulder to move the chains.

He’s such a special talent overall. Hopefully the Steelers can get things fixed quickly offensively to not waste his prime years. He’s a real weapon that should be the focal point for a great offense, not a league-basement one.