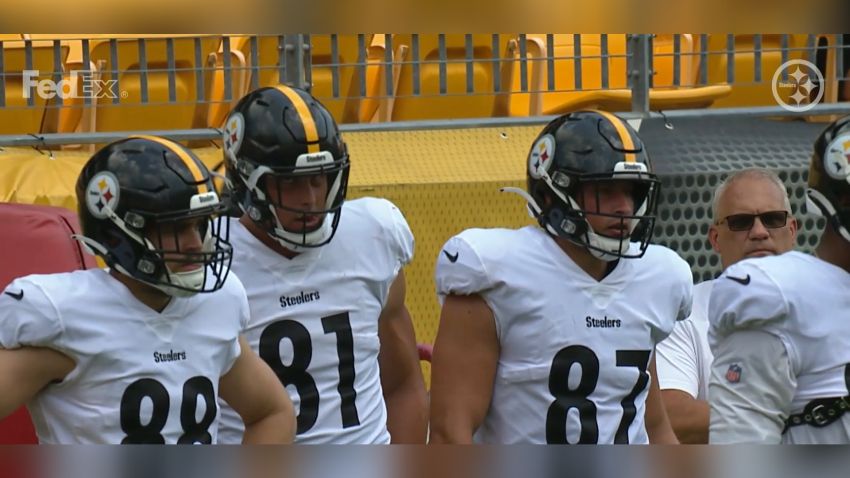 Pittsburgh Steelers rookie tight end Pat Freiermuth is currently in the concussion protocol, having presumably suffered his second diagnosed concussion of the season, which obviously puts his status for the team’s next game in jeopardy.

With Eric Ebron already on the Reserve/Injured List, that would seemingly make the team’s tight end depth chart perilously thin, with third-year Zach Gentry now on the top of the food chain. A former fifth-round pick—and former quarterback—Gentry spent the majority of his first two seasons on the bench as a healthy scratch, as the Steelers opted to dress only two tight ends with him as the third option.

Yet they’ve consistently dressed him, and three tight ends, all season when available, and Gentry has had a regular role, albeit in a blocking capacity primarily. Behind him, Kevin Rader would be their second tight end, who has been on the 53-man roster, called up from the practice squad, roughly since Ebron’s injury.

Head coach Mike Tomlin was asked how the Steelers would address the depth of the tight end position in the event that Freiermuth is indeed unavailable. “I haven’t spent a lot of time pondering the hypotheticals”, he told reporters yesterday. “You guys got our roster, not only our active roster but our practice squad. Our answers are in-house if he’s unavailable”.

Not the most shocking answer of all time, and also the most sensible. After all, Rader has been with the team for some time now, first joining the Steelers’ practice squad in December of 2019. He has already played in a few games this season—catching all of one pass for one yard. But with three yards after the catch, so there is that.

Gentry and Rader have been on the team longer than anybody else at the tight end position right now, and have naturally forged a bond over the years. He recently talked about Rader, calling him a guy who has basically just been waiting for his turn for a long time now, and believing that he is capable of stepping up.

The third tight end, should the team decide that one is needed, would be Jace Sternberger, who is on the practice squad, and has been since the Ebron injury. He is a third-year veteran and a former draft pick of the Green Bay Packers, where he spent his first two seasons.

The Steelers have had situations earlier in the season in which they had to decide whether or not to call up another tight end for a game. They haven’t always made the same decision, sometimes deciding to play with two. In fact, Rader was not available for the last game, and they did not activate Sternberger.

I’m guessing that if Freiermuth is unavailable, but Rader is, then only Gentry and Rader will dress. They can use Derek Watt and Zach Banner in tight end-like roles, and have been known to do so, should they need a third.