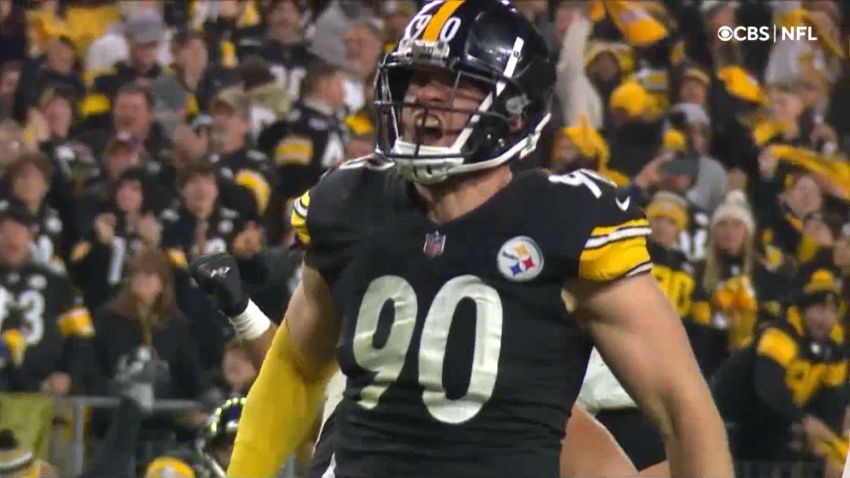 It felt as though he had a very good shot at it in 2019. Last year, it seemed as though he was the favorite. Now in 2021, albeit with five weeks left to play, the Pittsburgh Steelers’ T.J. Watt has to be the unquestioned frontrunner to finally earn the Defensive Player of the Year Award, for the first time in his fifth season—which would still leave him two behind his older brother, J.J.

The two-time first-team All-Pro is coming off of a career game on Sunday against the Baltimore Ravens, posting 3.5 sacks, which gives him 16 on the season in just 10 games played, tying James Harrison’s franchise record, who in 2008 recorded the record-breaking sack number 16 in week 16 (he did not play in week 17 because the game held no playoff implications for that year’s eventual Super Bowl-champion team).

Harrison won the Defensive Player of the Year Award that year. In addition to the 16 sacks, he also had a league-high seven forced fumbles with one recovery, an interception, three passes defensed, 101 tackles, 16 tackles for loss, 19 quarterback hits, and one safety. Can Watt complete his own DPOY statline over the final five games?

“Well, you know, I thought T.J. was the Defensive Player of the Year last year”, Steelers head coach Mike Tomlin acknowledged in an airing yesterday of the Mike Tomlin Show. “I think he’s at that type of a level where he’s in the conversation in a very serious way every year. This year is no different. He’s making those necessary plays. He really is, in the timely moments, and they’re very much appreciated”.

Watt currently has 47 tackles after 10 games played, with a league-leading 16 tackles for loss, 26 quarterback hits, four forced fumbles, two recoveries, and four passes defensed. If he were to keep up his per-game sack performance over the final five weeks, he would set a new NFL single-season record, hitting 24. The current record is 22.5.

Yet he led the NFL in sacks, tackles for loss, and quarterback hits last season, with two forced fumbles, an interception, and seven passes defensed, and he still finished at the runner-up behind the Los Angeles Rams’ Aaron Donald, who won the award for the third time.

One thing that might help Watt’s cause this year is a comparison of how the Steelers’ defense has played with and without him this season, since he has missed two games, demonstrating how much of a difference he makes. Yet the fact that the defense overall has not been very good this year will also work against him.

Meanwhile, you have a guy like the Dallas Cowboys’ Trevon Diggs, who has nine interceptions on the season with two pick-sixes and 14 passes defensed. The New England Patriots’ Stephon Gilmore won the DPOY Award over Watt in 2019 with six interceptions and 20 passes defensed with two touchdowns. Are we in danger of seeing a situation like that play out again?