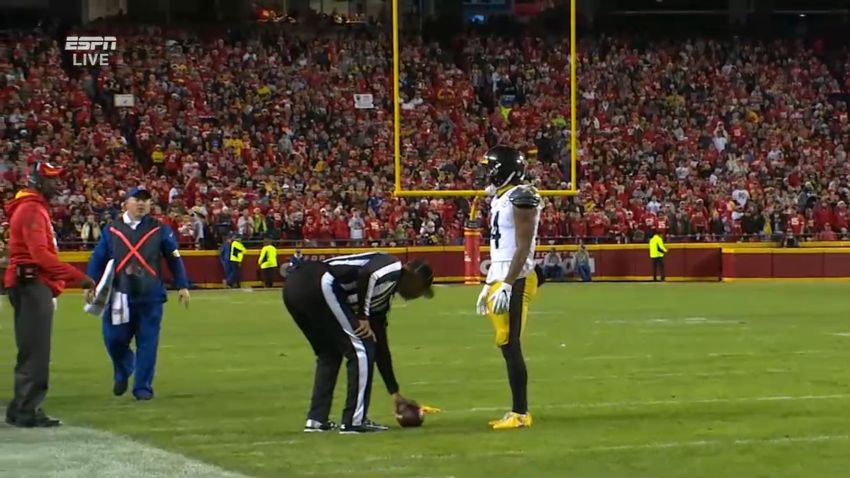 One of the NFL’s points of emphasis in officiating this season was to crack down on taunting behavior in games. The league’s efforts have been highly visible throughout the season, and the source of much consternation and controversy, whether debating the rule itself or its application.

Pittsburgh Steelers head coach Mike Tomlin has been an advocate in favor of the rule; today, however, he found himself on the opposite side of the league, or at least the in-game officiating, when it comes to the application of the rule, when his wide receiver, Ray-Ray McCloud, was flagged for taunting during the third quarter.

Ben Roethlisberger just completed a 3rd-and-6 pass to the fourth-year pro, who was able to get past Kansas City cornerback L’Jarius Sneed for eight. He spun around toward the official, and in the face of Sneed, made a gesture with his hand to indicate that he had gotten the first down. He may or may not have said something, as well, though it seemed as though it was the gesture that drew the flag.

Tomlin was asked about the taunting penalty, framed in the context of Chase Claypool’s taunting penalty weeks ago that briefly got him benched, but the head coach didn’t see the two as nearly comparable. “I categorically disagreed with it”, he said of McCloud’s penalty. “I thought that Ray-Ray was signaling first down and he turned around to do so and the guy just happened to be there. I think we’ve got to exercise some common sense”.

Tomlin, of course, has been around long enough to understand that the league is not going to apply ‘common sense’ to its rules; whatever looks like a violation is going to get flagged. There is no disputing that McCloud gestured a first down directly in Sneed’s face; whether that was because he was doing it as Sneed suddenly appeared in front of him or otherwise is immaterial as far as the officiating is concerned, at least on this day.

Despite giving them the first down, the play actually pushed the offense back from the Chiefs’ 31 to the 38, on a drive that ultimately stalled inside the red zone. Tomlin was going to run a play on 4th and 10 before John Leglue at left guard was flagged for a false start, after which they settled for a field goal, cutting the deficit to 30-3.

In other words, it really didn’t make a damn bit of difference.  But it was at least a reminder about how cautious one must be. It’s easy to imagine that foul occurring in a much more significant point of a closer game.

Despite falling to 7-7-1 on the season, the Steelers are still in contention—theoretically—for not just a playoff spot, but even the division title, though the latter would require that the Cincinnati Bengals lose to Chiefs and the Cleveland Browns. And they themselves must beat the Baltimore Ravens and the Browns.