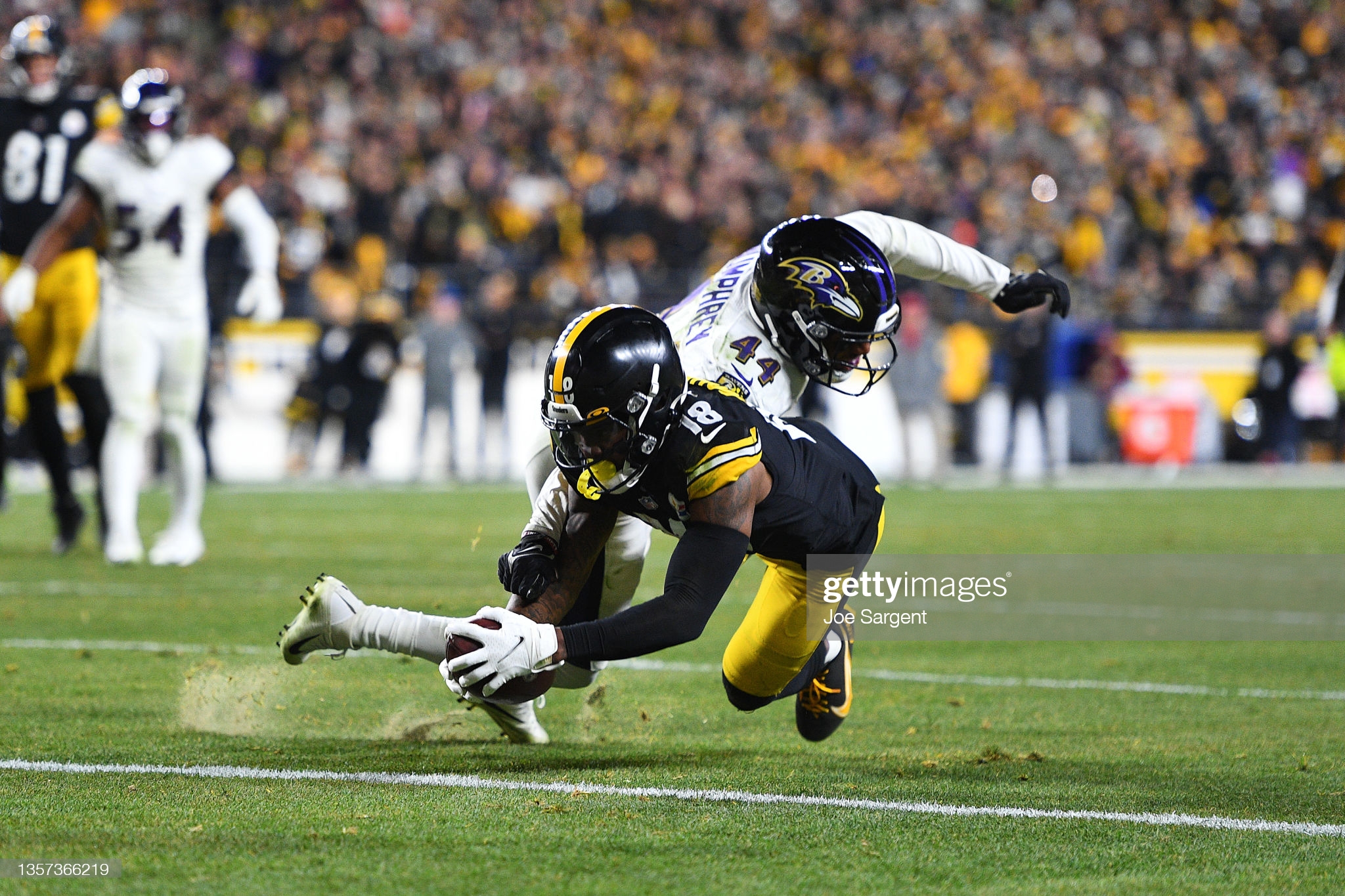 With 48 seconds left in the first half of Sunday’s AFC North matchup against the Baltimore Ravens, it looked like the ugly 2020 version of Pittsburgh Steelers’ wide receiver Diontae Johnson was emerging at the worst possible time.

On the play, Johnson found himself open deep downfield. Steelers’ quarterback Ben Roethlisberger dropped a nearly perfect ball to Johnson between two defenders for what should have been a touchdown. Instead, the ball clanged off of Johnson’s hands, causing flashbacks to his issues catching the football consistently just one season ago.

Another look at deep pass from Ben to Diontae that was dropped #Steelers pic.twitter.com/R54dVjABwz

That should have been a crushing blow to a Steelers’ offense that hadn’t had the football much up to that point, but it wasn’t a death sentence. Instead, it galvanized Johnson, who responded in a big way at Heinz Field, hauling in two touchdowns in the fourth quarter to help lead the Steelers to a surprising 20-19 upset win over the top-seeded Ravens in yet another classic rivalry matchup on the North Shore.

Johnson finished the game with a game-high eight catches for 105 yards and the two pivotal touchdowns, showing a national audience once again that he’s a true No. 1-type wide receiver. His response to the drop was so strong that Steelers’ head coach Mike Tomlin was asked after the game about his mental toughness.

“Diontae has been unbelievable all year, in terms of his approach to business,” Tomlin said to reporters following the win, according to video via the Steelers’ official YouTube page. “And that’s why he’s playing well. And so I don’t think any of us are surprised. I think we were just surprised by the drop, probably more than anything because of what we see him do day to day. He’s the first to the field. He’s the last off the field, just about any day we work.”

That’s been the case dating back to training camp with Johnson, who typically hit the field first, roughly half an hour before any other Steeler, getting in as much work with his hands as possible. That work and that overall mentality has paid off in a big way as Johnson is on pace for 109 catches, 1,293 yards and nine touchdowns.

The drop was rather shocking from Johnson late in the first half, considering how sure-handed he’s been all season long, nearly erasing his drops issues in just one season.

Credit to the third-year receiver though for bouncing back in a massive way, making pivotal plays down the stretch to help lead the Steelers to a much-needed victory, keeping the black and gold alive in the AFC playoff picture.