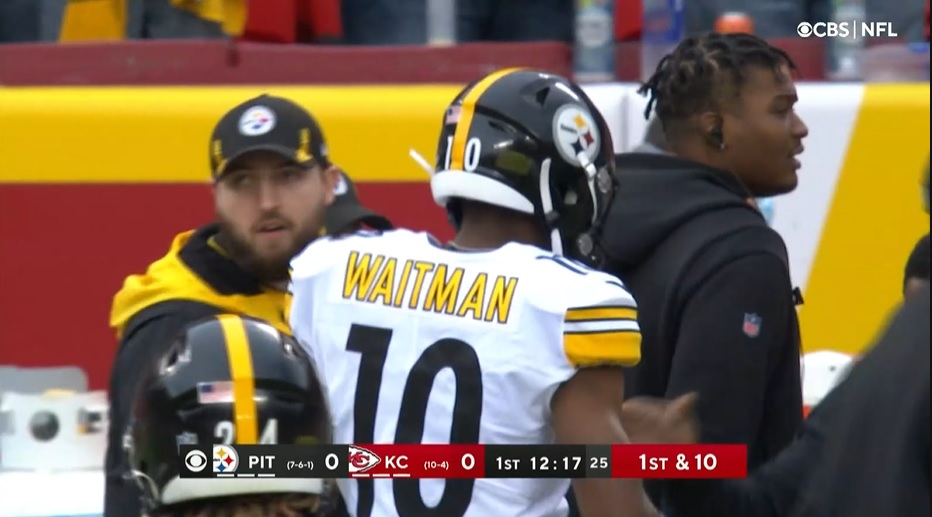 It’s usually a bad sign when the first thing to talk about post-game is how well the punter played. That’s where the Pittsburgh Steelers find themselves fresh off a 36-10 loss to the Kansas City Chiefs Sunday. Bright spots were few but included punter Corliss Waitman, impressing in his NFL debut.

Signed to the team Saturday afternoon after Pressley Harvin III was ruled out, Waitman punted twice with 58 and 63 yard boots, the latter only nerfed by a touchback that led to just a 43-yard net. For a guy brought back to the team barely more than 24 hours ago, it was an impressive showing, and Mike Tomlin said as much in his post-game presser.

“We had exposure to Corliss,” Tomlin said via the team’s YouTube channel of why Waitman was the punter they chose to play.”He’s been part of our program. He’s got a relationship with Boz. And so the holding component of it was a component of the decision-making as well. I thought Corliss did a solid job. We’re appreciative of his efforts.”

Waitman’s first NFL stop was with the Pittsburgh Steelers, signed by the team as a rookie out of South Alabama after the 2020 NFL Draft. He had a solid college career and nearly played another year at Mississippi State but was ruled ineligible, leading him to enter the draft. He never punted for the Steelers in a game, the 2020 preseason wiped out due to COVID and he spent last season on the practice squad. Even when the team released Dustin Colquitt, they turned back to veteran Jordan Berry instead of Waitman.

Waitman was carried through the beginning stages of the 2021 offseason. But after Pressley Harvin III was drafted and with Berry still on the roster, there was no need for a third punter and Waitman was waived.

Now, funny enough, the team has three punters on their roster. After Harvin was ruled out following the death of his father on Christmas morning, the Steelers signed two punters Saturday, Waitman and Cameron Nizialek. Waitman was given the nod and made active Sunday afternoon, beating out Nizialek.

Chris Boswell did miss a 36-yard field goal but it’s unclear if there was an issue with the hold or if wind simply played a part in pushing his kick left. Overall, on such short notice and for an NFL debut, Waitman was solid. Because he was signed off the Patriots’ practice squad, the Steelers will be required to pay him a salary over the next three weeks. Harvin is likely to return for Monday night’s game against the Cleveland Browns but if not, Waitman should again be their Plan B.