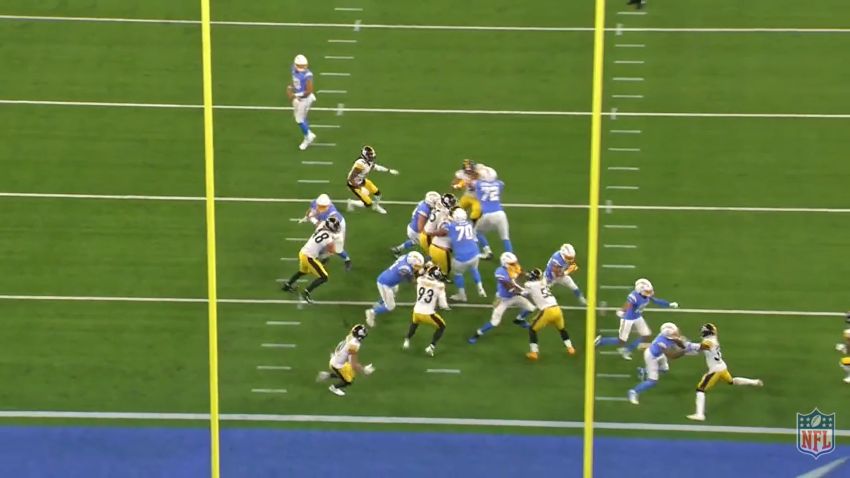 Pittsburgh Steelers inside linebacker Devin Bush certainly isn’t having a great third season and because of that, the former first round draft pick has been receiving his fair share of criticism. A few days ago, in an interview on DVE Radio, former Steelers running back Merril Hoge really let loose on Bush when talking about the multitude of problems the Pittsburgh defense has had so far this season.

After Hoge dumped on Bush, he was then told what the Steelers linebacker had said earlier this week as it relates to him dealing with the metal aspects of coming off a season-ending knee injury in 2020 that required him undergoing ACL surgery. In case you missed it, here is what Bush said.

“The biggest part is mental,” Bush first explained. “I mean, if I had to make a good example, it would be like, you know, if you get bit by a dog, who’s to say the next time you go pet a dog.”

So, what did Hoge think about that quote?

“He said, what?” Hoge first asked.

After getting more clarification as to what Bush said, Hoge gave an extended response.

“Well, I think we understand the problem,” Hoge said. “I have no idea what getting bit by a dog has to do with being at the A-gap or C-gap when you’re supposed to be there. Listen, I delivered papers. I got bit by a lot of dogs. When I came to the next house that had a dog there, I was carrying something, and that dog was not going to bite me if he came out. And I was not going to get bit by that dog. I still had to deliver that paper. I still had things to do. And then if I called them and said, ‘Listen, can you keep your dog in so he doesn’t bite me anymore?’ and when they didn’t, I prepared myself for that. And then I played football and they have nothing to do with each other. Nothing to do with each other.”

Hoge wasn’t done talking about Bush after that. He went on to suggest that Bush might still be benched had fellow inside linebacker Robert Spillane not suffered a knee injury against the Cincinnati Bengals several games ago.

“It’s disappointing because he [Bush] is, from his rookie year, he looks like he’s a rookie still,” Hoge said. “And that is not even a joke. And actually, he’s worse. He’s worse than he was as a rookie. He was confused in the passing game, and I understood that as a rookie because a lot of rookies are confused. He’s still confused when you throw concepts at him. He overruns his run fits. He never gets off blocks. He makes very few tackles unless they run into him. And he’s killing that team.

“I mean, if Spillane doesn’t get hurt, he’s not playing. I mean, he was so bad against Cincinnati on the first drive, they pulled him. They put Spillane out there. Then Spillane got hurt so they had to put him back because of the depth. It’s just, it’s too bad that he sees himself like that, that he doesn’t realize his real problems and fix those because it’s not getting bit by a dog isn’t the problem.”

Well, how is that for getting blasted? If you think I have been blasting Bush so far this season, what Hoge said about the young linebacker a few days ago makes my comments look tame.

So, what’s next for Bush? Well, we will find out on Sunday against the Tennessee Titans and that’s because Spillane is expected to return from his knee injury this weekend. Spillane replaced Bush early in that Week 13 game against the Bengals and it does make you wonder if he would have played the lion’s share of the snaps moving forward in that contest had he not injured his knee late in the first quarter.

Steelers defensive coordinator Keith Butler said on Thursday that he was looking forward to getting Spillane back this week. He also hinted that Bush might start seeing less playing time once Spillane does return to action.

Regardless of what happens on Sunday at Heinz Field, Bush must start playing better. Its already pretty much a forgone conclusion that the Steelers won’t be picking up Bush’s fifth-year option during the offseason. At this point, one must really winder if Bush is a lock to even be a starter to open the 2022 season. Sunday’s game certainly will be interesting, and I bet Hoge certainly will be paying close attention to the snap distribution of the inside linebackers in that contest just like several of us will be doing.