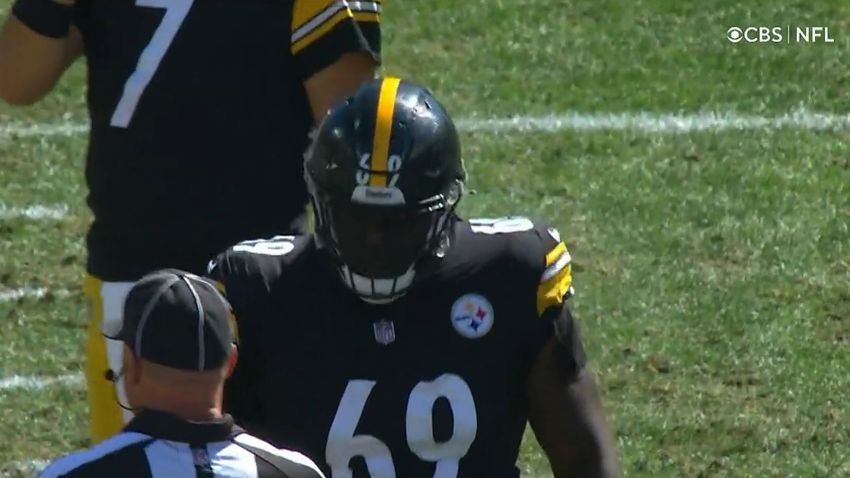 Pittsburgh Steelers head coach Mike Tomlin confirmed on Tuesday that second-year guard Kevin Dotson would begin practicing this week, thus beginning his 21-day window, at the end of which he must be activated to the 53-man roster from the Reserve/Injured List.

Dotson suffered an ankle injury four weeks ago, and has been on the reserve list since. J.C. Hassenauer started in his place…before he was injured. B.J. Finney followed…before he was injured. John Leglue, making his NFL debut this year due to the litany of injuries, has been the next man up. But they could use another man. And offensive coordinator Matt Canada believes Dotson was looking the part before he got hurt.

“It really thought Dot’ was coming”, he told reporters yesterday, via the team. “Early on in camp. he was nicked up and it took a while, and then here we go, and you really started to see him come on and make some plays. I can remember the touchdown against the Browns, he pulled and made a big block, and you started to see him playing with what we all remembered, with that energy and confidence”.

“It was really unfortunate that he got hurt”, he added. “Obviously, with him coming back, if he’s at full strength and ready to go, it would be awesome for us. But it’s been a process to get him there. We’re hopeful as we move forward, but we’ll see out here today and tomorrow how he moves in practice and where he’s at in comparison to our other guys”.

Dotson was the second-year player that a lot of people were highest on coming into this season, especially in light of the tremendous turnover along the offensive line, many believing that he would be the only lineman they wouldn’t have to worry about.

It hasn’t been quite that straightforward, and there was some consternation surrounding him—much of it unverified, mind you—but he was injured at the start of training camp, which delayed his return and also required him to work his way back into the starting lineup…over Rashaad Coward, who is now on the practice squad.

Canada wouldn’t say that Dotson would definitely play and start this week if he’s healthy enough, instead deferring to the notion of putting the best five on the field. “There’s still a rust factor. There’s nothing like experience. He hasn’t gotten any reps, so we’ll just have to see where he is”, he said. “I’m not gonna minimize that part. But it’s mostly just physical to see where he’s at”.

I don’t think there’s any doubt that he is the best option that they have available to them provided that he is healthy. Hassenauer, however, is also working his way back. Either one of them would be a boost to the offensive line at this point. Whether or not that’s saying very much is up to you, I suppose.