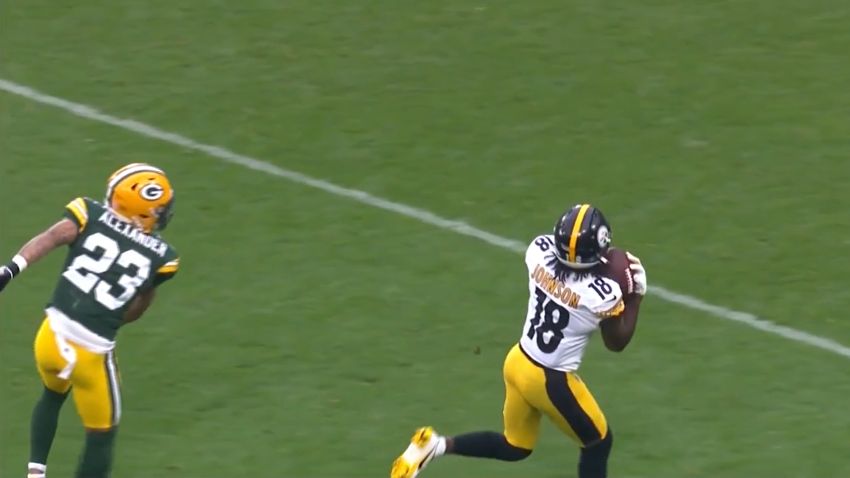 Earlier today, we noted the lack of “jump” in key second-year players. But one third-year guy has taken a massive leap. After a turbulent sophomore season, Diontae Johnson has come on strong as the Pittsburgh Steelers’ best and most consistent wide receiver. Offensive coordinator Matt Canada credits Johnson’s work ethic for getting him to this point. He spoke with reporters Thursday about Johnson’s performance.

“I think with Diontae, you look at the improvement he’s made this year,” Canada told reporters in audio provided by the team. “Everything he does, how hard he’s playing. I think his trajectory and how he’s worked as a real compliment to him and his work ethic. And obviously we use him as much as we can.”

Leading the league in drops a year ago, Johnson has shown consistent and reliable hands. He’s proven he can work all levels of the field. The quick/screen game, the three-step game, and he has a pair of long touchdowns on the season.

Johnson was one of the first players on the field at training camp and one of the last off it, going through a pre-practice catching routine with one of the assistant coaches. We noted that in our post-camp recap, giving him a “B” grade for his summer performance.

“He had a lot of volume, a team-high 30 receptions and to his credit, didn’t miss a single practice. He was also among this camp’s hardest workers, one of the first players on the field catching passes before practice and staying after to catch some more.”

If you’ve caught one of the night broadcasts, you probably saw his tennis ball routine he does before each game.

On the season, Johnson leads the Steelers in several key categories. His 68 receptions and 809 receiving yards are tops on the team while his four touchdowns are second, only behind Pat Freiermuth, and the most of any wide receiver. He’s by far the team’s best route runner and has been the highest volume receiver on the team. His 109 targets lap second place, Chase Claypool with 69.

With Claypool struggling this season, Johnson’s emergence has been key for the Steelers’ passing offense. He’s on track to finish the year with 105 receptions for over 1,200 yards and six touchdowns, a strong stat line as he goes into his fourth season and begins angling for a long-term contract extension.