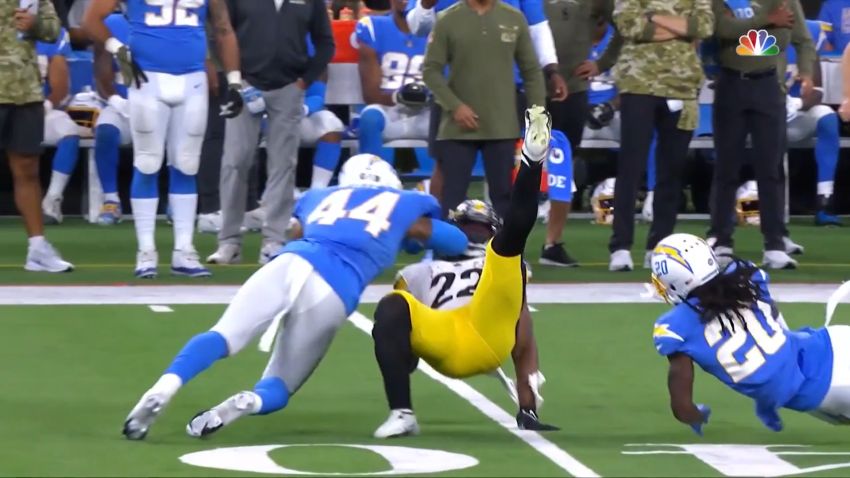 Professionally speaking, there is no doubt that Pittsburgh Steelers rookie running back Najee Harris is in a difficult position. That’s not to say you wouldn’t want to be him—who wouldn’t want to be a healthy, athletic, 23-year-old millionaire—but from a football point of view, he’s in a bind.

The Steelers drafted him more or less to be the face of their franchise, the sum of all their hopes of revitalizing their running game, something to which they have paid lip service for years. He has done everything he can to accomplish that almost single-handedly without a great deal in the way of support.

And sometimes that leads to pressing, and trying to do to much, ultimately failing to do your job. But it’s almost an inevitability under the circumstances.

Offensive coordinator Matt Canada acknowledged yesterday that “there’s probably fairness” in the insinuation that Harris is at times trying to do too much, and in the process not doing enough, whether it results in lost yardage or some other negative. But he certainly sounded as though he would gladly take that over the opposite.

“Najee’s such a great competitor. He’s done so much, and we’re giving him so many opportunities and so many touches because we have such belief in his ability”, he said of Harris, who leads the entire NFL in touches this season, and is third in rushing attempts. “He wants to win and he’s trying to do everything he can”.

“I think you could probably look at anybody when you get in a situation when you’re not having quite as much success as you hoped and you got to try to make sure you just do your job”, Canada added, referencing the need to try to limit Harris going outside of the play when nothing is there. “It’s certainly something we’re talking about. I’m never going to question his effort or how hard he cares. He’s doing all he can to help us win and we’ll continue to coach him”.

Head coach Mike Tomlin much earlier in the season also acknowledged that Harris had some work to do, though it was of a different sort. When addressing global issues with the run game, he mentioned that he had missed a hole or two, while at other times the holes aren’t there, or a penalty comes on the other side of it.

At this point in the season, the biggest issue is his simply dealing with an anemic run-game structure. The offensive line is poor in this area, particularly the interior, though one hopes the return of Kevin Dotson can help with that.

Not only has it been the quality of blocking, it’s also been scheme, which we have seen come home to roost in certain games more than others. It’s play calling, it’s play design. It’s the lack of an effective intermediate passing game.

It’s many, many, things, and Harris has the hardest job of all within it. It’s no surprise that he may find himself pressing at times, trying to create something that isn’t there just because the entire team is so desperate for something there, and understanding that that’s what he was brought in to do.

Maybe next season he won’t have to try so hard. Maybe.