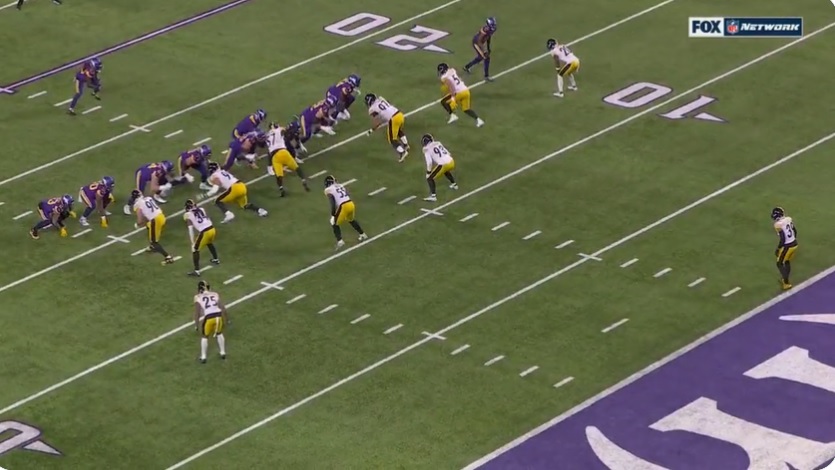 The Pittsburgh Steelers failed to complete an improbable 29-point comeback, falling to the Minnesota Vikings 36-28 on Thursday Night Football.

The Vikings drove to the Pittsburgh 35 on the opening drive of the game on the strength of a couple of catches by WR Justin Jefferson and a 20-yard run by RB Dalvin Cook. K Greg Joseph came out to attempt a 53-yard field goal, but he missed wide left and the Steelers took over at their own 43 with the game tied 0-0.

The Steelers looked to be driving after a first-and-ten pass in Minnesota territory gained six yards to WR Chase Claypool, but Claypool was flagged for unnecessary roughness after the play which set the Steelers back 15 yards. QB Ben Roethlisberger was incomplete to WR Ray-Ray McCloud on second down, but he hit WR Diontae Johnson for 15 yards on third down and scrambled for a first down gain of five on fourth-and-four. Roethlisberger was sacked on second-and-12, and on third-and-18 Johnson gained 6 to set up a 49-yard Boswell field goal, but he was no good.

Minnesota took over at their own 39, and on second down Cook gashed the Steelers defense for a 30-yard gain to the Pittsburgh 31. On the ensuing first down, RB Alexander Mattison ran for a 14-yard gain to give the Vikings another first down. On second-and-seven, QB Kirk Cousin hit a wide-open Jefferson in the end zone for a 14-yard touchdown. Joseph’s extra point was no good, but the Vikings led 6-0 with 3:31 left in the first quarter.

On second-and-three, Claypool reached for a first down and it was initially ruled a fumble, but he was ruled down by contact on review. On third-and-one, RB Najee Harris was stopped for a loss of one and P Pressley Harvin III came out to punt. WR Dede Westbrook returned the punt 17 yards to their own 43. On first down, Jefferson had another big play, picking up 18 yards and moving the Vikings to the Pittsburgh 39. On the last play before the end of the quarter, Cook picked up another 16 yards on a carry to give Minnesota a first down at the Pittsburgh 20. Three straight incompletions by Cousins brought out Joseph, and he made a 38-yard field goal and the Vikings took a 9-0 lead with 14:43 left in the first half.

After a touchback, Roethlisberger was sacked and lost nine yards and the Steelers went three-and-out. The Vikings took over at their own 22 following a holding penalty. On first down, Jefferson gained 22 and on second down Cook picked up 15 yards and the Vikings quickly entered Steelers’ territory at their 41. After a holding penalty wiped out a 6-yard gain by Mattison, TE Tyler Conklin gained 19 yards on a reception over the middle, and the Vikings got a first down on a three-yard gain by Mattison. Dalvin Cook ran for 29 yards and a touchdown on the next play, and the Vikings took a 16-0 lead after Joseph’s extra point.

Pittsburgh started their drive inside the 19 after a penalty on the kick return. The Steelers went three-and-out, and Harvin III’s punt went out of bounds at the Minnesota 40. The Vikings went for it on fourth-and-one from their own 49 and Cousins picked up three yards on a quarterback sneak to give Minnesota a first down. The Vikings picked up a first down at the Pittsburgh 28 on a 17-yard completion to TE Chris Herndon. On third-and-ten, Cousins connected with WR K.J. Osborn for 13 yards and a first down, and on third-and-one from inside the ten, Dalvin Cook rushed for a seven-yard touchdown and the Vikings went up 23-0 with 2:20 left in the half after Joseph’s made extra point.

The Steelers drove to their own 49, but that was the furthest they’d get as a holding penalty on Johnson brought the Steelers back to their own 42, and two plays later on third-and-11 Roethlisberger was sacked by LB Eric Kendricks. Harvin III’s punt pinned the Vikings at their 12 with 1:35 left in a first half the Steelers’ would like to forget. Minnesota went three-and-out, but the Steelers didn’t have enough time when they got the ball back and their drive ended at midfield with the halftime break, as the Vikings went into the half leading 23-0.

The Steelers started the opening possession of the second half at their own 12-yard line after a holding penalty by S Miles Killebrew on the kick return. The Steelers went three-and-out with yet another third down sack on Roethlisberger, with this one by DT Sheldon Richardson. The Vikings next drive started at the Pittsburgh 34 after a 41-yard punt by Harvin III was returned 15 yards by Westbrook. Minnesota drove to the Pittsburgh 24 before getting stopped on third-and-14, but Joseph converted a 42-yard field goal and the Vikings went up 26-0.

The Steelers drive started on their own 15, but a 23-yard run by Harris on second down moved Pittsburgh to their own 42. On first down, Roethlisberger was intercepted by CB Bashaud Breeland, and Breeland returned the pick to the Pittsburgh 30. The Vikings settled for another field goal after getting inside the Pittsburgh 10, and Joseph was good from 25 yards out and the Vikings took a 29-0 lead with 6:15 left in the third quarter.

The Steelers finally put together a scoring drive, as some strong runs by Harris and 29-yard and eight-yard receptions by WR James Washington moved the Steelers inside the Minnesota 5, and Harris caught a three-yard touchdown pass from Roethlisberger. Boswell’s extra point cut the Steelers’ deficit to 22 at 29-7 with under three minutes to go in the third quarter.

On first-and-ten from the Minnesota 25, CB Ahkello Witherspoon picked off a deflected ball and the Steelers took over at the Minnesota 42. Pittsburgh capitalized off the turnover, with Harris starting the drive off with a 13-yard carry and Claypool making an impressive catch for 14-yards and a first down later on in the drive. After a defensive pass interference penalty against CB Cameron Dantzler in the end zone, Harris ran in a one-yard touchdown and the Steelers made it a two-possession game at 29-14 after Boswell’s made extra point.

Pittsburgh forced a three-and-out on the Vikings first drive of the fourth quarter, and they started their drive at their own 31 after an eight-yard punt return by McCloud. After a two-yard run by Harris, Roethlisberger hit Johnson downfield for a 37-yard gain and on the next play, Roethlisberger threw a 30-yard touchdown pass to Washington over the middle of the field to make it a 29-20 game. The Steelers two-point conversion attempt was unsuccessful, and the game remained 29-20 with 12:11 to go in the fourth quarter. The momentum was short-lived, as the Vikings scored on their next drive after Cousins hooked up with Osborn for a 62-yard touchdown. The Vikings took a 36-20 lead with 10:51 to go in the game after Joseph’s extra point.

The Steelers ran the ball three straight times and couldn’t convert a third-and-one and they were forced to go for it on fourth-and-three, but they committed a delay of game penalty and had to punt. Harvin III’s punt went just 34 yards and the Vikings took over at their own 39 up by 16. On third-and-five with the Steelers needing a stop to stay in the game, Cousins scrambled for 11 yards and a first down. Two plays later, on third-and-four, Witherspoon got his second interception of the game and returned it 42 yards to the Minnesota 21. A six-yard completion to McCloud was followed by a 15-yard touchdown pass to TE Pat Freiermuth, and the Steelers had to go for two down 36-26. Roethlisberger found Johnson, and the Steelers made it a one possession game at 36-28.

A second down holding penalty against the Vikings forced them into a second-and-21 on their next drive, and the Steelers weren’t able to get off the field when Cousins floated a pass to a wide-open Dalvin Cook for 17 yards against Marcus Allen. The Steelers took their first timeout of the half with 2:38 left. The Steelers used their third and final timeout with 2:30 left and the Vikings facing third-and-eight from their own 45. Cousins was incomplete to Osborn, and the Vikings had to punt. Ex-Steelers P Jordan Berry pinned the Steelers at their 4, so Pittsburgh had to travel 96 yards in 2:16.

The Steelers return to Heinz Field on December 19th for a matchup with the Tennessee Titans at 1:00 p.m.