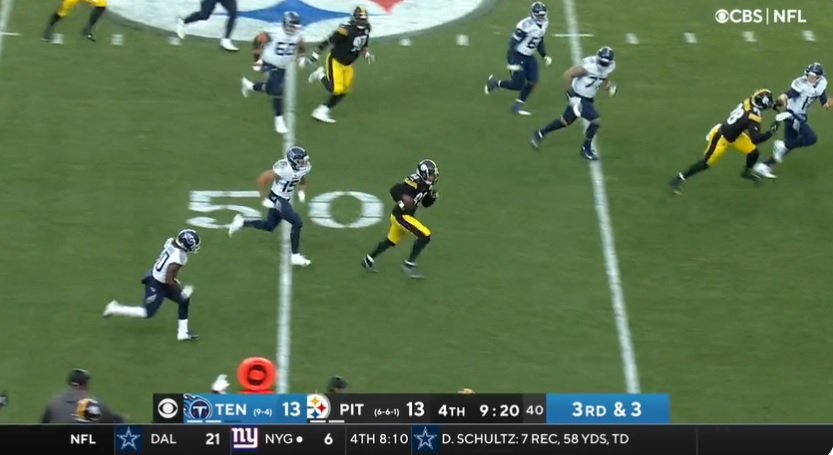 After days of talking about the Steelers needing to step up on the defensive side of the football, make some plays and get back on track, the Steelers’ defense did just that on Sunday, forcing four turnovers and holding the Tennessee Titans’ offense to just 13 points in a 19-13 win, keeping Pittsburgh alive in the AFC playoff picture.

Along with the four turnovers, a key stop late on fourth down late in the game by Joe Haden on a completion to Nick Westbrook-Ikhine won the game for the Steelers, which just so happened to be in his first game back after missing more than a month with a foot injury. Haden also recovered a key fumble in the second half, shutting down a Titans’ drive near midfield.

There was the forced fumble by Arthur Maulet that Minkah Fitzpatrick recovered in the first half, the Joe Schobert interception off of a tipped pass from Taco Charlton, a fumbled snap recovered by T.J. Watt and a forced fumble by Cameron Sutton that Haden recovered helping lead the Steelers to the win.

Following the six-point win over the Titans, Steelers’ defensive captain Cameron Heyward stated that the defensive performance was one that was needed, especially with contributions coming from many key players on the defensive side of the football.

“Man, we needed contributions by everybody,” Heyward said to reporters Sunday, according to audio provided by the team. “I know we had some pretty big plays, Taco [Charlton] batting the ball up and Joe Schobert catching it. Joe Haden making some unbelievable plays coming back to us; Derrek Tuszka playing well. This was a hard-fought game. Was it perfect? Nope.

“We gave up too much in the running game, but you know, we kept it in reach,” Heyward added. “Offense got a touchdown…we got some big turnovers in their side of the field; really shortened the field, and we were able to get the w because of it.”

The Steelers’ defense certainly had a number of guys step up on Sunday against the Titans, including the likes of Charlton, Schobert, Haden, Tuszka, not to mention Devin Bush, Maulet and Chris Wormley, pairing with key guys like Heyward, T.J. Watt and Minkah Fitzpatrick to do just enough to pick up a much-needed win.

While the Titans still had a ton of success on the ground rushing for 201 yards as a team and the Steelers needing a crucial fourth-down stop late, it’s hard to find any type of fault with the defense’s performance on Sunday, especially with the number of role players that stepped up in big spots to make plays.