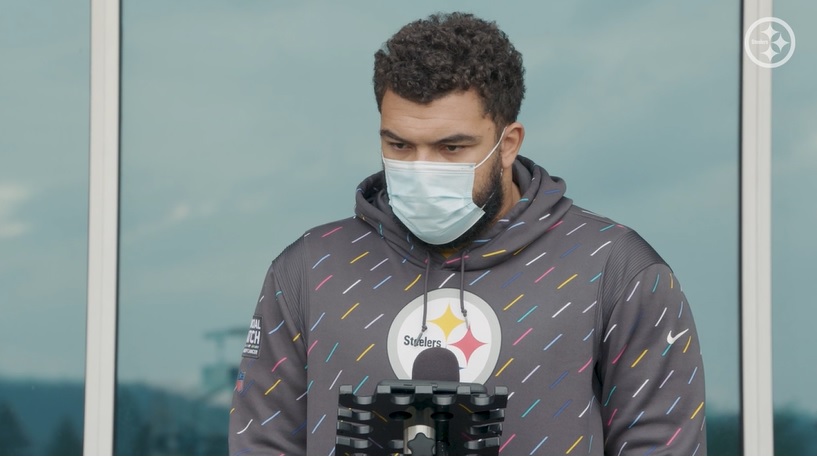 On Wednesday, Pittsburgh Steelers quarterback Ben Roethlisberger talked about how he is constantly trying to impart tradition and history of the organization to younger players on the roster. On the heels of Roethlisberger talking on that subject, Steelers defensive tackle Cameron Heyward, the leader of the defense, was asked what he views his role as when it comes to educating new players as they come in, and if it is similar to the way he was indoctrinated when he arrived as a rookie several years ago.

“You know, I think the tradition is winning,” Heyward said. “I think we’re all pissy and annoyed about it, but at the end of the day, the tradition to be upheld is to win the game. Play with a lot of effort. Everything else is beside the point.”

Heyward was then asked if it’s okay to kind of evolve and honor traditions, but at that same time understand that things are changing in today’s NFL such as playing music, or whatever else might be considered part of the game and landscape.

“Winning is never going to get evolved and that’s the bottom line,” Heyward said. “Everything else can change and just like the players change, but at the end of the day, we’re here to win a football game. And if it’s not about football, we’re not concerned with it. I know it’s been a big deal about freaking music, but honestly, I’m done talking about it because at the end of the day, I’m here to put my teammates, these coaches, everybody in the best position, and my job to lead everybody.”

After getting blown out by the Cincinnati Bengals last Sunday, a lot of former Steelers players have been vocal in various media outlets bemoaning the lack of physicality of the team right now, especially on the defensive side of the football. On Thursday, Heyward was asked if he agrees with the lack of physicality assessments that those former Steelers have come forward with recently.

“I don’t really care, you know,” Heyward said. “At the end of the day, it’s 11 guys and this team getting it done. You know, I appreciate their comments, but we need to get it done. If we start worrying about what’s said elsewhere, you know, shame on us.”

While on the topic of defensive physicality, especially when it comes to the Steelers’ defense being unable to stop the opposing team’s running game this season, Heyward was asked if there is any substitute for physicality, and if so, how does he go about helping instill that this far along in the regular season.

“It comes down to technique and getting off blocks, being physical at the point of attack,” Heyward said. “Understanding alignment, execution. You can’t really substitute anything for physicality. I know we had a day of pads [this week], but for us, we have to preach the little things, because it’s the little things that are getting us beat. Running to the ball. Understanding that if someone does make a mistake, having other guys there accountable for it. You know, it takes 11 guys on defense to be a good defense. It doesn’t take one guy. It doesn’t take two guys. It’s got to take the whole team playing a lot better.”

With a key divisional game against the Baltimore Ravens on tap for Sunday afternoon at Heinz Field, it’s been sounding like Steelers head coach Mike Tomlin has been attempting to send a stronger message to his team this week. With that being the speculation, Heyward was asked on Thursday to reveal what Tomlin’s message to the team has been this week, and if he feels said message has been received well so far.

“You know, you really don’t know if it’s received until, you know, how the game plays out,” Heyward said. “You know, we’re judged off of wins and losses. You know, coach [Tomlin] has been hard on us and we didn’t get the job done. And there’s a number of times where we’re falling short and to acknowledge that is huge, but to learn from that is even better.”

Heyward was then asked if he’s concerned that Tomlin’s messages these last few weeks might not be resonating well with the younger players on the roster, especially on the heels of the team getting blown out last Sunday by the Bengals after whatever the head coach’s message to the team was last week at this same time following the Week 11 Sunday night road loss to the Los Angeles Chargers.

“Man, if a younger player doesn’t get it, that’s shame on them,” Heyward said. “The goal is to beat the Baltimore Ravens now, and to do that, you need to learn from your past mistakes. We’re playing a really good offense, playing a really good running opponent, playing an MVP candidate in Lamar Jackson. If we don’t donate our time and really lock in on this guy, man, he’s going to have the field day. And that’s just being honest.

The 5-5-1 Steelers certainly have their backs to the wall right now. Sunday’s game against the 8-3 Baltimore Ravens is a big one, and technically one the team must win. A loss to the Ravens on Sunday will effectively snuff out all chances of winning the AFC North, and extremely hamper the team’s chances of ultimately making the playoffs.

How the team responds to the loss to the Bengals last Sunday will be scrutinized heavily by fans and perhaps even more former players. Heyward, according to his comments on Thursday, certainly seems to know the gravity of Sunday’s home game against the Ravens, on the heels of being embarrassed in Week 12.