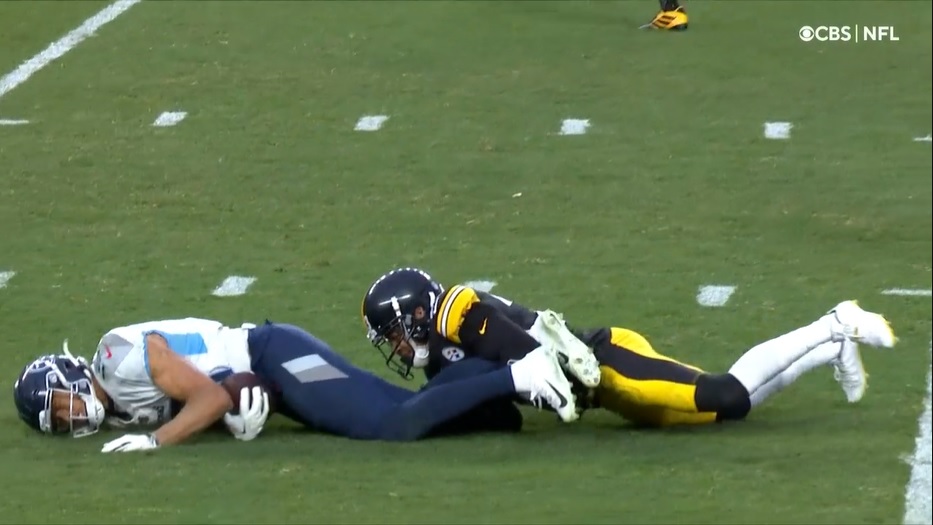 Joe Haden returned to the Pittsburgh Steelers’ lineup after missing a month of action. It couldn’t have come a moment too soon. Haden played on a pitch count and frankly, didn’t play well for swarths of the game, he came through with the biggest play in the biggest moment, stopping Tennessee Titans’ WR Nick Westbrook-Ikhine short of the sticks on a 4th down completion with less than a minute to go.

By now, you’ve probably seen the play. But let’s watch it again.

Talking with reporters after the game, Haden reflected on the playcall and the moment.

“We were in a man to man call,” Haden said in audio provided by the team. “So when my receiver ran in, I thought he was setting a pick play for the inside receiver to run a wheel route. So I was expecting him to throw the ball, but I had my heels on the first down marker. So I was just sliding inside and then he threw it to him. I just knew if I tackled him and made him go backwards instead of forwards, there was no way he was gonna be able to get the first down.”

Haden’s stick was critical. If the receiver had fallen forward at all, Tennessee would’ve picked up the first down. The man he tackled, Westbrook-Ikhine, isn’t a small guy either, weighing in at nearly 6’3, 211 pounds at his 2020 Indiana Pro Day. Haden’s the most physical corner on this team, the best run defender, and it showed there.

Despite the terrible spot from the officials, the Titans came up a couple of chain links shy of the marker. Pittsburgh got the ball on downs, took a knee, and ended the game.

Pittsburgh’s defense struggled on defense throughout the day. At halftime, the Titans were 6/10 and converted on third and short and third and long throughout. The Steelers have been forced to play more zone coverage this year, allowing receivers to find soft spots underneath. But as Haden said, Pittsburgh switched to man coverage on that fourth down stop. Haden played the sticks perfectly, the receiver did not, and that proved to be the difference in the game.