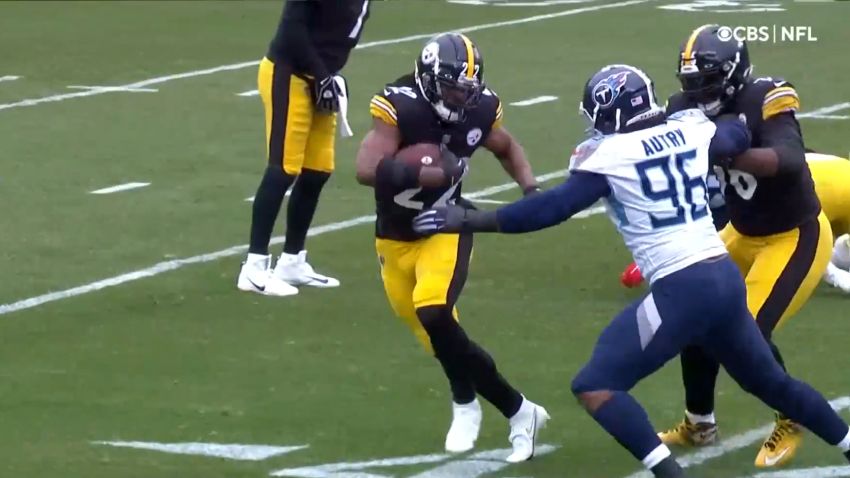 Two weeks ago, Pittsburgh Steelers’ rookie running back Najee Harris was riding high after rushing for a combined 165 yards and one touchdown in two games against the Baltimore Ravens and Minnesota Vikings.

Now, one week removed from a disastrous performance against the Tennessee Titans, things are looking rather rough for Harris, who may be hitting the proverbial rookie wall while on pace for more than 400 touches in a single season behind a bad offensive line.

Against the Titans, Harris produced very little, rushing for just 18 yards on 12 carries, adding two catches for eight yards on a day where he was hit in the backfield early and often, and when he did have some running room he missed some holes, resulting in a poor performance across the board.

As we stated on the recent @TerriblePodcast, Najee Harris didn't do himself any favors on a few runs against the Titans. Here's one that he just needed to hard in the hole and make the LB make the play to limit him to 6 or 7. #Steelers pic.twitter.com/Vlr2LIns6X

That poor performance led to Harris sliding down NFL.com’s Week 16 RB Index, which is put together each week by nine-year NFL running back and current NFL Network and NFL.com analyst Maurice Jones-Drew. Harris’ slide puts him behind Minnesota’s Dalvin Cook, who moved up four spots overall, pushing the likes of Harris, Cincinnati’s Joe Mixon, and Arizona’s James Conner down one spot each.

“The Steelers’ offense was dismal on Sunday, and if not for careless turnovers by the Titans, Pittsburgh’s postseason hopes would have taken a mighty blow,” Jones-Drew writes. “Harris had a season-low 18 yards on 12 carries for a lowly 1.5 yards per carry. Harris has tons of talent, but there’s only so much he can do running behind the 27th-ranked run-blocking unit (per PFF).”

Jones-Drew clearly passes the struggles from Harris against the Titans off on the poor offensive line, and while it’s not entirely wrong, it’s not fully fair to put the performance against Tennessee on the offensive line in total. Harris missed some holes, as the clips above show. He appears to be a bit gun-shy with the football in the backfield, expecting a hit almost as soon as he touches the football. When that doesn’t happen, Harris gets a bit thrown off and tries to hit the home run right away, rather than being decisive and getting all that he can by plowing straight ahead.