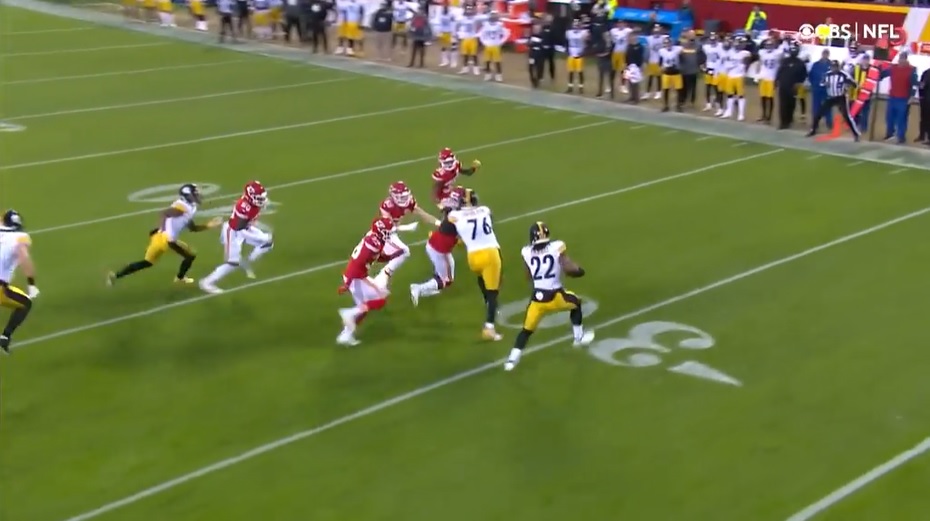 Sunday’s loss to the Kansas City Chiefs was an ugly loss full of ugly plays. But perhaps none pulled your hair out – if you have any left to pull, that is – than the Pittsburgh Steelers’ failed 4th and 1 toss play late in the second half. Down 23-0 at their own 34, it’s hard to be mad about the team deciding to go for it. A risky play, sure, but one worth taking to try and get back in the game, especially knowing the Chiefs were getting the ball to start the second half.

Pittsburgh comes out in a 11 personnel. Tight formation to the field with tight end Zach Gentry with WRs Chase Claypool and Ray-Ray McCloud. It’s a crack toss to the right, the field side, with the intent being the receivers blocking down and right tackle Chukwuma Okorafor pulling around and lead blocking for Najee Harris.

But ex-Steeler Melvin Ingram sniffs it out, beats the crack, and is the first man in to disrupt the play. How did he know what was coming? Obviously, being with the Steelers earlier this year helps a lot. He was with the team all throughout training camp and the first half of the season. He knows what Pittsburgh likes to do. It’s not like the Steelers’ offense has changed much, or at all, since Ingram was shipped away.

There’s other pre-snap cues too. Check out the eyes of Claypool and McCloud. Staring inside. They’re looking at who they need to block, an indicator they’re trying to crack down. I’m betting Ingram picked up on that. 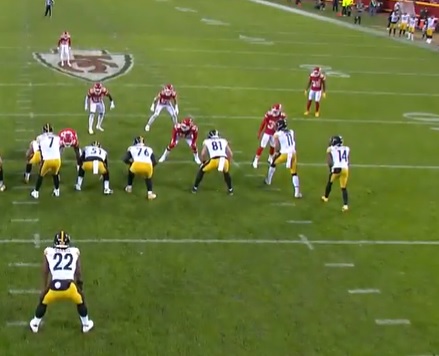 Off the snap, Ingram immediately works over the top of Gentry, Claypool, and McCloud. It results in Gentry and Claypool blocking each other. Which is…less than ideal. 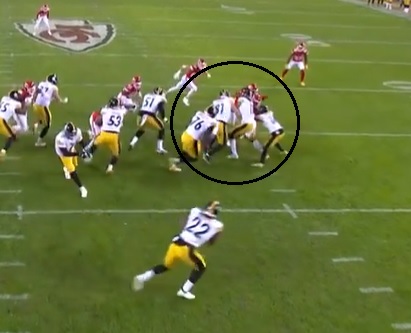 Okorafor pulls around but probably gets too much depth in doing so, not that it ultimately mattered much. There’s zero blocking to the frontside. Gentry and Claypool collide, McCloud is hanging on to the slot corner for dear life, and the Chiefs’ rally and pursuit is excellent. Harris has one blocker against five (!!) Chiefs’ players.

Pictures are worth a thousand words. It’s also worth a loss of three. 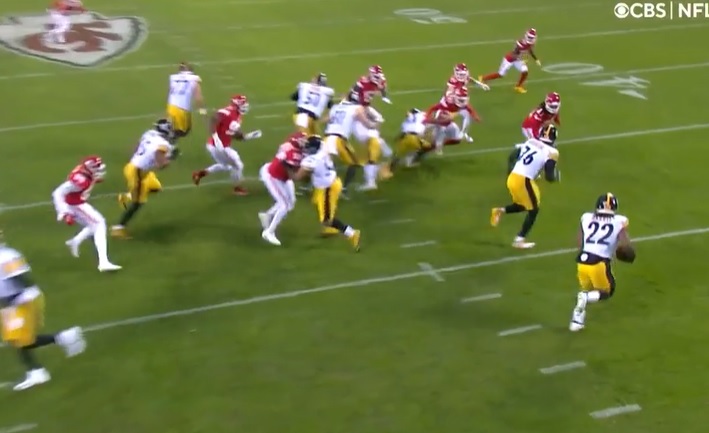 Matt Canada’s reaction says it all. So does Chris Morgan’s as if he’s thinking “Yeah, I knew that one wouldn’t work” as he grades it out on his notebook.

And here’s a look at the whole mess.

I can’t for the life of me find the thread on Twitter – if anyone can dish out an assist, let me know – but there was a recent study that showed toss plays on fourth down are actually more successful than runs up the middle.

My issue is less with the actual decision to run the toss, which I’m sure is where most of your anger lies. Though make no mistake, the execution here is horrendous. My issue is the decision to run at all on fourth down with time running low in the first half and the Steelers needing yards and points. The need to convert was first and foremost, I get that.

But Pittsburgh couldn’t run the ball worth a lick in the first half, 29 total yards and 3.6 yards per carry, and even if they converted, they would’ve bled more clock or had to burn another timeout. Perhaps their hope was for Harris to get out of bounds and pick up the first down, best of both worlds, but that’s asking for a lot to the field side when the conversion is most important.

So this is just bad process. And bad execution. Horrendous all around, and sums up the Steelers inability to out-scheme their opponent again and again.