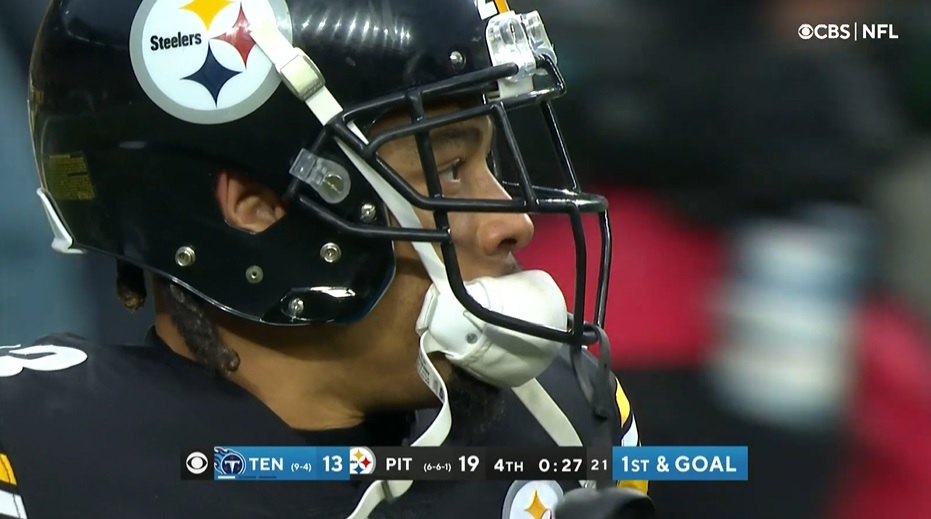 Joe Haden didn’t play a great game Sunday against the Tennessee Titans. But he made the game’s biggest play. 4th and 6, up six, less than a minute to go. Get a stop here and the Steelers win. That’s exactly what Haden did.

Let’s break it down.

Titans in a 3×1 formation with a “sniffer” in the backfield, the RB lined up close to the line of scrimmage to combat Marcus Allen’s pressure look. To the top and trips side, it’s a spacing concept with #3 running a seven-yard dig, #2 becoming new #1 (most outside wide receiver) and #1 running a five-yard curl.

The first thing Haden does well here is avoiding the pick. As #2 releases out and #1 releases in, Haden has to stay clean and work over the top of any potential pick or rub. Haden does that and is still able to drive downhill on the sticks as Ryan Tannehill connects with WR Nick Westbrook-Ikhine. 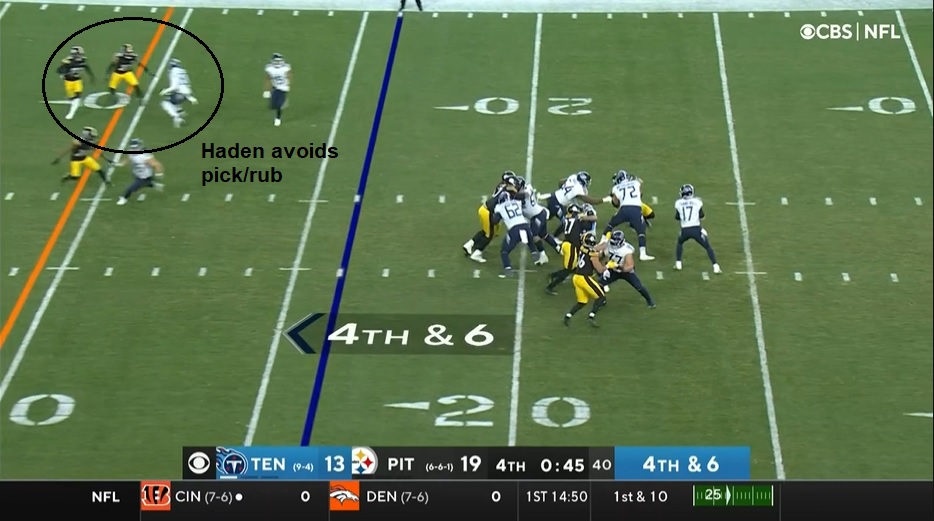 Knowing how close the pass is to the sticks, Haden doesn’t give any ground and is aggressive with his tackle. He attacks with a hard shot, driving his feet on contact. And he finishes the plays, wrapping up around Westbrook-Ikhine’s waist and drags him down. 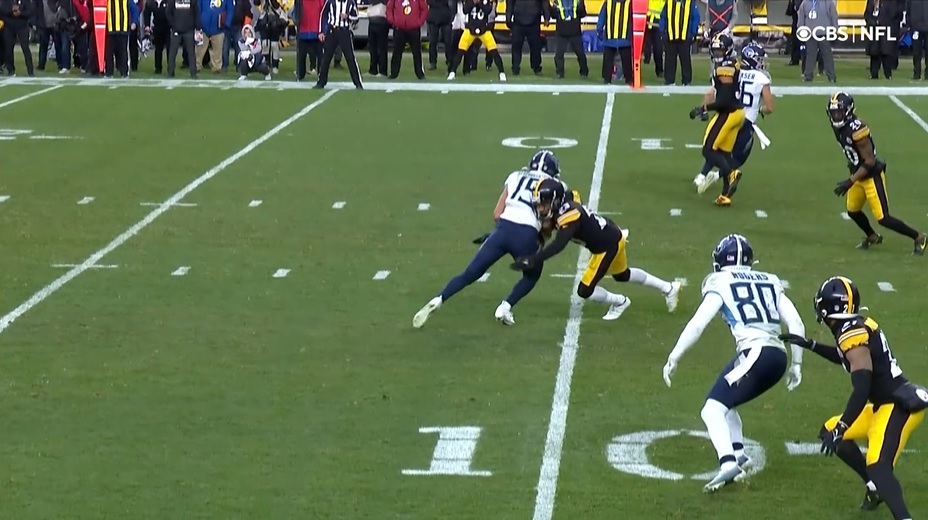 I wouldn’t call this a “wrap and roll” kind of tackle, but it’s something Haden has been good at throughout his career. The ability to create power and torque by spinning his body to bring the ball carrier to the ground without any forward progress.

Here’s just one example of that. Different type of tackle, but watch Haden’s ability to recover and tackle Cardinals’ WR Christian Kirk 1v1 in 2019.

Had a couple people on my timeline tell me Joe Haden wasn't a good tackler anymore. Simply not true. One-on-one with Kirk in open field, wrap and roll tackle. Forced 4th down, which led to Watt's INT. Haden having awesome year. #Steelers pic.twitter.com/QCuHyk0nna

That additional power created by the roll brings the receiver down about a half-yard shy. Even with a terrible spot, the Titans are still short, and the Steelers kneel down to win the game.

Here’s a look at the play from two angles. Live view of Haden working over the rub and making the stop.

Here’s a replay of just the tackle. Watch the power on contact, Haden driving his feet, and finishing with a wrap-up/roll tackle.

Westbrook-Ikhine is nearly 6’3″ and roughly 210 pounds. Haden is…not. But with aggressiveness and great technique, he’s able to play bigger and make the stop. Had the Titans converted, maybe the Steelers still keep him out of the end zone. But I’m sure glad we didn’t have to find out.

Haden is near the end of his career. He’s battled injuries, including a foot injury this year he didn’t seem to be fully recovered from Sunday. He got beat by Westbrook-Ikhine for what should’ve been a long catch and/or touchdown. At this stage in his career, Haden can’t really run, and has been beat time and time again. In the last year of his contract, it’s hard to justify giving him any sort of extension for the money he’s going to ask for. But Haden has enough veteran savvy and technique to make these kinds of plays. And in big moments, Haden is the man.