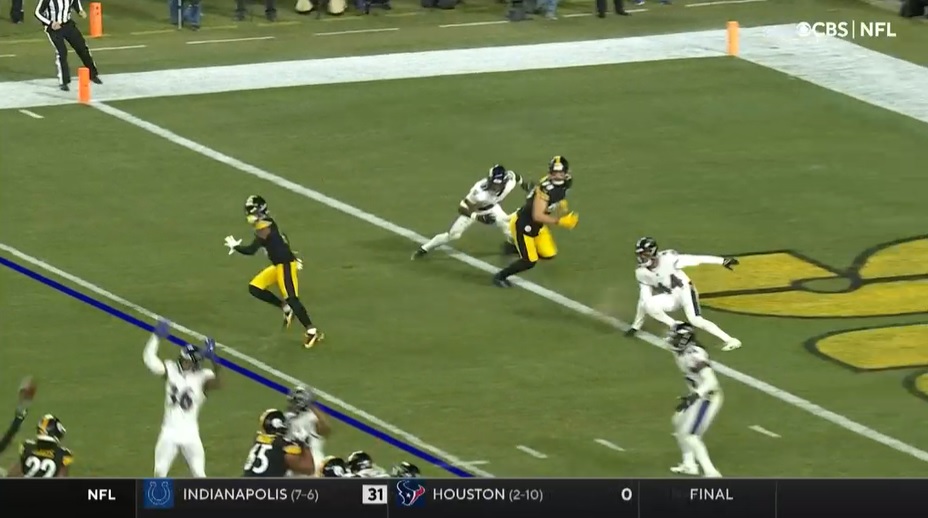 Not going to lie, I didn’t like how Matt Canada called the Pittsburgh Steelers’ first half offense. Too run-heavy, too bang-your-head-against-a-wall, and while the Steelers simply didn’t run many plays in the first half, some of that is due to poor playcalling.

But Canada, like virtually the rest of this Steelers’ team, put it together in the second half. And the concepts he called on the Steelers’ two touchdowns were downright brilliant. Let’s take a look.

The first. Diontae Johnson’s 29-yard score. 1st and 10 out of pistol, a formation we saw more in this game and one I whole-heartedly endorse. 11 personnel, 2×2 formation. To the bottom, WR Ray-Ray McCloud (in the slot) and Diontae Johnson (to the bottom, the X WR) run a switch route. McCloud on a wheel route to the outside becoming the new #1 (outside receiver), with Johnson running a post to the middle as the new #2 (slot receiver).

Here’s how it looks below. McCloud does break his route off in the clip you’ll see, likely a sight adjustment based on coverage, but I’ve only shown the wheel below. 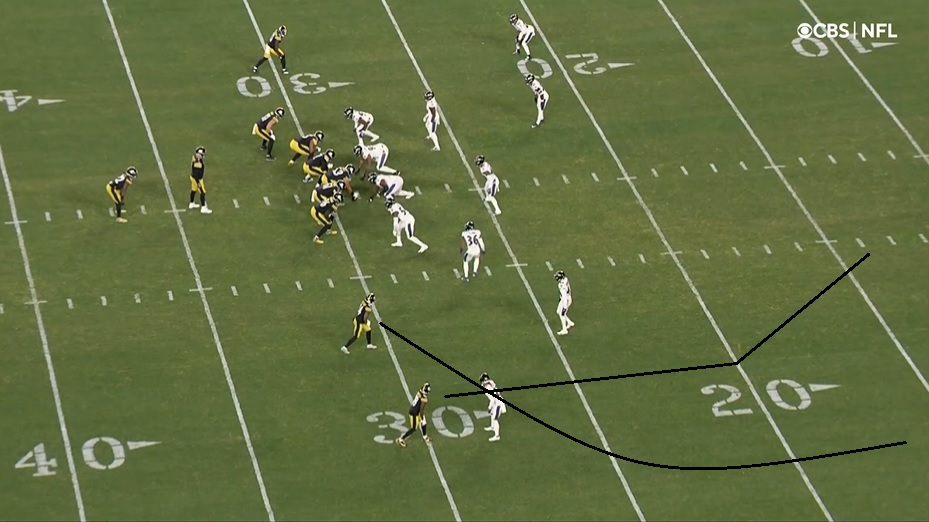 This forces the Ravens’ DBs to communicate the switch route. Will they banjo the call and pass it off to each other, or will they switch themselves and take the original receiver? Baltimore gets crossed here. The slot corner takes McCloud on the wheel while the outside LCB doesn’t carry Johnson on the post. They get bunched up, and it leaves Johnson running open to the middle of the field. 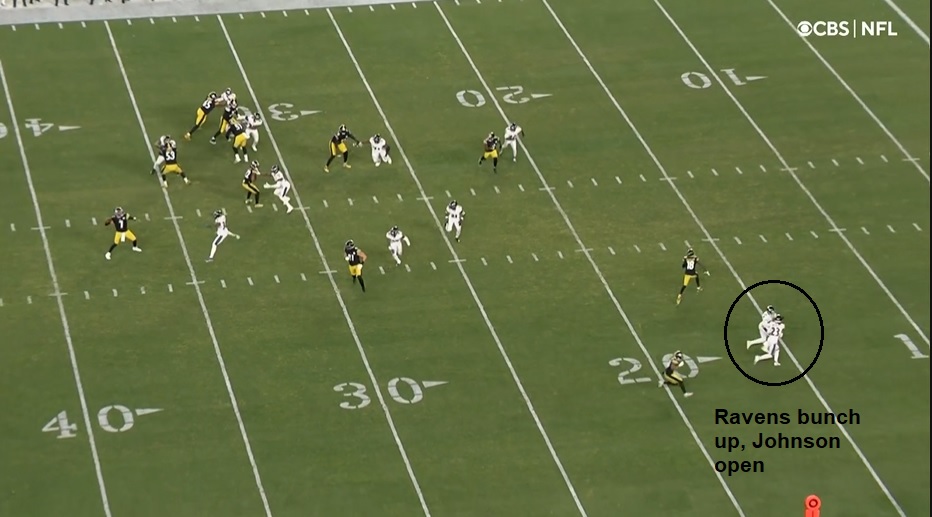 With no deep safety help, Johnson is wide open. Roethlisberger nearly threw to Zach Gentry in the flat (that’s the #1 progression in the play) but saw Johnson break open. So he was able to pull the ball back down and hit Johnson for the easy score.

Check out the whole play.

Now let’s check out the game-winner. 3×1 formation with Diontae Johnson to the top and Pat Freiermuth in the slot. A rub/return route from Johnson, running underneath Freiermuth initially like he’s going to run the slant. But Johnson stops dead in his tracks and pivots/returns to the outside. The CB isn’t nearly as fluid or agile as him, and Johnson creates a ton of space.

Nice job by Freiermuth to make the CB work hard to get over the top. The Ravens don’t pass things off, and frees up Freiermuth to then run vertically to create more space underneath for Johnson. The throw is honestly a little behind Johnson, but there’s enough space and time for Johnson to make the catch, get upfield, and dive over the goal line.

Let’s take a look at the whole play.

This is a similar, though not identical, play to what the Steelers attempted to run weeks ago in their win over the Cleveland Browns. But in that example, Chase Claypool didn’t create any space and everything got bunched up, there was no rub, and the play failed.

Matt Canada deep in his bag of tricks coming off the bye. Diontae Johnson begins to run across like jet motion. Stops and pivots into a route. Nice design, Browns did well to defend it. #Steelers pic.twitter.com/vLAT1PYU2t

Overall, I think Canada has done a really good job using Johnson’s impressive change-of-direction ability down near the goal line. He’s run a ton of creative routes near the end zone, like these pair of sluggos against the Bills and Chargers.

Overall, these calls were clutch and impressive from Canada. The results with him as first-year OC have been mixed, but he’s doing a good job of playing to players’ strengths and putting them in positions to succeed. Combine that with sound scheme that creates defensive confusion, and you get a pair of uncontested touchdown passes to beat the Ravens in a game Pittsburgh needed to win. And they did.