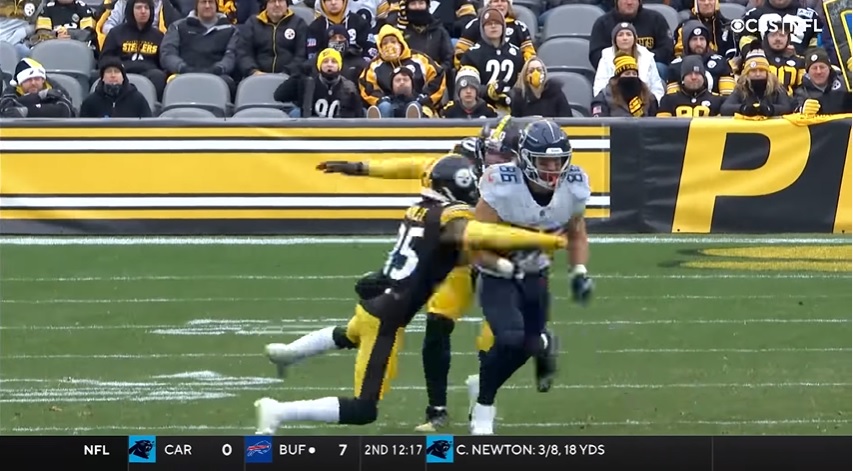 The Pittsburgh Steelers won a close one Sunday against the Tennessee Titans by a score of 19-13 at Heinz Field. The offense for Pittsburgh was horrendous for most of the afternoon, failing to top 40 yards rushing on the ground and capitalize on four turnovers created by the defense, settling for field goals inside Tennessee territory to put them on top. While the rush defense still surrendered over 200 yards on the ground in this one, there were notable improvements on the defensive side of the football, limiting Tennessee in the passing game as well as creating splash plays to give the Steelers the chance at victory.

There were several key reserve defensive players that made impactful plays in this game that will be highlighted.

I must admit I was not a huge fan of the Loudermilk selection at the time during the 2021 NFL Draft, like most of the Steelers Depot crew. Surrendering a future fourth-round selection for a developmental senior DL that looked like he needed a redshirt season didn’t make much sense at the time, but with injuries to Stephon Tuitt and Tyson Alualu, Loudermilk has seen a fair amount of playing time in his first season. He has had his ups and downs, but his plays has shown flashes the last couple of weeks. For example, watch this defensive stop, as he sheds the TE and makes the play in the backfield on the stretch run to the left.

Here is another play Loudermilk makes against the run, lining up in the A-Gap and fighting pressure against the RG #64 Nate Davis, staying square to the LOS and countering back to wrap up #7 D’Onta Foreman for a minimal gain. EDGE #48 Derek Tuszka also does a great job getting off the chop block, and gets in on the tackle here on this play.

Speaking of Tuszka, he managed to make quite the splash play here at the end of the game in the fourth quarter, recording his first career sack on QB #17 Ryan Tannehill. He beats the RT around the corner and strips the ball out of Tannehill’s hand, which Tennessee does recover to set up third-and-long for the next play.

Taco Charlton has been fairly productive in a backup role behind T.J. Watt and Alex Highsmith in terms of generating pressure off the edge when his number has been called upon, after Pittsburgh shipped off EDGE Melvin Ingram to Kansas City. However, Charlton also has the length and size to impact the passing game when he doesn’t get home by getting his hands up in passing lanes, much like Dave Bryan and Alex Kozora mentioned in a recent edition of The Terrible Podcast. Check out this play where Charlton starts his rush, but notices the quick pass to the flat, tipping the ball up into the hands of LB #93 Joe Schobert, who secures the pick and takes it into Tennessee territory.

The Steelers have been regretting the loss of nickel cornerback Mike Hilton for much of the season due to his impact near the LOS as a blitzer, as well as in run defense. However, credit should be given to FA signing Arthur Maulet, who contributed heavily in this game in a similar way Hilton did during his time in Pittsburgh. For example, watch Maulet come off the edge on the blitz here on this play, forcing the incomplete pass by Tannehill to Foreman on the screen. As you can see, Foreman had plenty of room to run with blockers out in front, so the pressure by Maulet likely saves the Pittsburgh defense from an explosive play.

Maulet also makes his impact felt against the Titans against the run during the game. Watch this toss sweep to the right to #28 Jeremy McNichols, where Maulet initially fights off the block by WR #80 Chester Rogers and then takes on the inside shoulder of RT, filling the lane and wrapping up McNichols around the ankles to cut him down for little to no gain on the play.

Finally, Mike Hilton had a knack for knocking the football out as a tackler during his time in Pittsburgh, forcing three fumbles and recovering five during his time with the Steelers. Maulet manages to make an impact in this area in this contest, looking to be opportunistic after the catch made by TE #86 Anthony Firkser, closing ground on the receiver after dropping to his zone, wrapping Firkser up, and punching the ball out, which S #39 Minkah Fitzpatrick recovers.

The is no denying the Pittsburgh must get the defensive front shored up in order to stop bleeding yards on the ground to opposing offenses, but the ability to create turnovers had been the catalyst for this unit the previous two seasons, and that seemed to return in this contest thanks to the contributions of several lesser-heralded members of the defense. For Pittsburgh’s sake, hopefully the focus of creating splash plays in the turnover department continues down the stretch to help a rather stagnant offense get good field position, as the team attempts to make a final playoff push in three must-win games against three AFC playoff-contending teams.

What are your thoughts regarding the contributions make on the defensive side of the football by the players mentioned above? Do you think that these splash plays made a difference in the outcome of the game? What is the future moving forward for the likes of Isaiahh Loudermilk, Derek Tuszka, Taco Charlton, and Arthur Maulet in Pittsburgh the rest of this season and into the future? Please leave your thoughts in the comments section below and thanks again for reading!