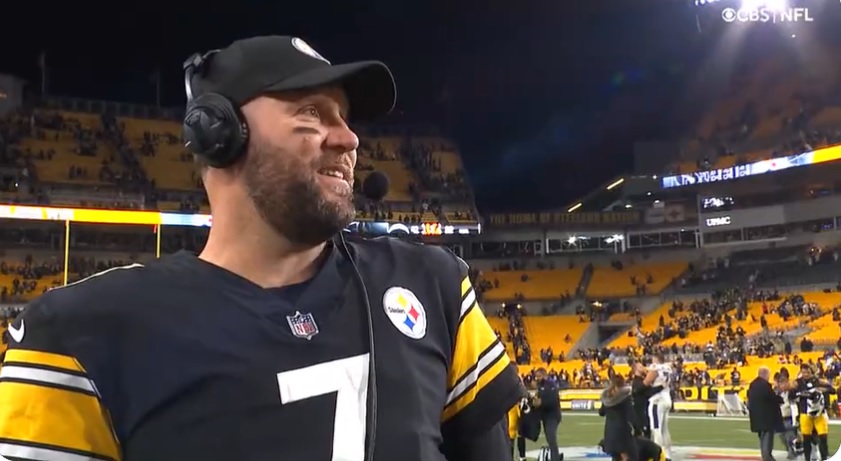 Beating the Baltimore Ravens is always sweet. Doing it for almost certainly the last time at Heinz Field is all the sweeter. And Ben Roethlisberger couldn’t help but get a little choked up talking about it. Moments after the Pittsburgh Steelers’ 20-19 win over the Ravens, Roethlisberger spoke with CBS’ Tracy Wolfson about what it all meant to him.

“I’m so proud of the guys,” he told Wolfson. “The way they stepped up. We had guys go down, guys step up. [John] Leglue stepped up. Najee ran hard at the end of the game. Benny Snell comes in and runs hard. Receivers made plays. I can’t say enough about the way guys fought. And of course, the defense at the end.”

With backs against the wall following an embarrassing 41-10 loss to the Cincinnati Bengals a week ago, Pittsburgh kept the score down in the first half and rallied in the second half. Roethlisberger played a great game, tossing a pair of touchdowns to Diontae Johnson while leading his 10th career comeback against the Ravens, a record by any QB against one team.

Ben Roethlisberger now has 10 game-winning drives against the Ravens. Most by a QB against any one team. #Steelers

He finished the day completing 21 of 31 passes for 236 yards, two touchdowns, and no interceptions. But his play was even better than the numbers suggest.

Sunday was almost certainly the final time Roethlisberger will play the Ravens at home. Even a hypothetical playoff matchup would likely take place in Baltimore. Roethlisberger has shown real emotion in the team’s AFC North wins this season, amped up after beating the Browns in Cleveland and emotional talking about today’s victory.

“This game’s unbelievable. This rivalry. To do it in front of the fans after last week and come out here at home. Winning in front of these fans at this place is special. We love the fans, we want to do it for them. Like I said, God is good and we’re glad we could get a win.”

The Steelers are in a much better place exiting Sunday than they were entering it, though their road going forward is difficult, beginning with a Thursday night game at Minnesota. Regardless of the rest of the season, enjoy these final five games. They’re Roethlisberger’s final ones in the NFL. It’s clear he’s soaking it all in.

"This game is unbelievable… Winning in front of these fans in this place is just special."

An emotional Ben Roethlisberger talks with @tracywolfson after the @steelers hard fought victory over the Ravens. pic.twitter.com/pzMXfXIQBw